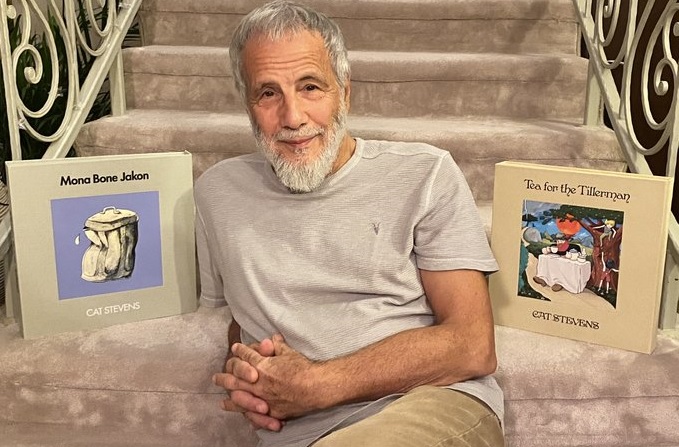 The two new massive sets are sure to be a must-have for dedicated Yusuf/Cat Stevens fans, and each boasts a ton of bonus/rare material.

More on the Tea for the Tillerman reissue, per a news release:

The Tea for the Tillerman Super Deluxe box set features a new 2020 remaster, also completed at Abbey Road Studios and overseen by original album producer Paul Samwell-Smith, and mix, of the original 1970 Island Records multitrack master tape, overseen by Yusuf and engineer David Hefti. The 2020 Mix also appears on the 1LP format which is exclusive to this box set. CD3 features the newly released Tea for the Tillerman² – Yusuf has chosen to include it here in order to present the most complete edition of the original album, showing how these songs are as pertinent today as they were when written over 50 years ago. CD4 includes demos, outtakes and alternate versions, including two previously unreleased tracks (“Can This Be Love?,” “It’s So Good,” “If You Want To Sing Out, Sing Out,” and “Don’t Be Shy”), while CD5 features 25 live performances – 5 previously unreleased tracks recorded Live At The Troubadour, 4 previously unreleased live performances from the December 8, 1970 show at Fillmore East, and 6 previously unreleased live from British, French and German TV performances over 1970/71. The box set also includes the previously unreleased “Can This Be Love?;” originally scheduled to appear on the album, the song was written by Cat along with “Father and Son” for a proposed musical project “Revolussia” in 1969.

The Super Deluxe box set is rounded out with a Blu-ray featuring HD 24bit/96khz audio of the 2020 Mix, as well as 8 previously unreleased live TV performances, 7 tracks performed live at KCNET studios, Los Angeles, and the official “Father and Son” video. Also housed in a card envelope within the box is a “Pick Up A Good Book” bookmark, a Yusuf / Cat Stevens designed “Miles From Nowhere” print, a reproduction handwritten lyric sheet for “Miles From Nowhere,” a fold-out “Live From The Troubadour 1970” poster, and a Tea for the Tillerman sticker.

As for Mona Bone Jakon, that album will also be made available in lavish Deluxe Edition formats.

More on the deluxe revisiting of Mona Bone Jakon, per a news release:

50 years on, the songs on Mona Bone Jakon still sound as fresh as the day they were recorded. Presented here in a new 2020 remastered version on CD, and a new 2020 Mix by David Hefti on CD and LP, the Super Deluxe Edition also includes an exclusive third CD of previously unreleased demos, and a fourth CD featuring 18 live performances from 1970/71. The 2020 remaster was completed at Abbey Road Studios, and was overseen by original album producer, Paul Samwell-Smith.

This 50th anniversary set is completed with a live 12” etched vinyl EP of the rare audience recording of “Live At Plumpton Jazz & Blues Festival” from August, 1970, and with a Blu-ray disc featuring the original promo video of “Lady D’Arbanville,” plus eight live TV performances, and the HD audio of the new Mona Bone Jakon 2020 Mix. There’s also a selection of memorabilia including the Island Records press kit, two Island press photos, a replica 1970 Plumpton Jazz and Blues flyer, a Cat Stevens tour sticker and “dustbin” greetings card and pop art print in a card envelope.

These exciting archival releases come ahead of the CatSong Festival, a virtual event championing the legacy of Yusuf/Cat Stevens that will premiere on Saturday, Dec. 5 on Stevens’s YouTube channel.