2019 marked the 50th anniversary of the original Woodstock festival, which took place in upstate New York in 1969 and has rightly earned a place among the most important and influential rock and roll events in history.

A company called Peace of Stage, put together by co-founder Steve Gold — who attended the original Woodstock event in ’69 and recently obtained the original wooden stage that the likes of Jimi Hendrix, Santana, Creedence Clearwater Revival and so many other legendary musical acts — has turned that stage wood into artifacts that serve as mementos from the landmark event it was.

“We decided to create various items of that legendary festival by offering small pieces of (literally) the centerpiece of the event, the Woodstock stage – the same floorboards on which Jimi Hendrix, Janis Joplin and other rock greats made magic – as collectibles people can treasure for themselves or others,” says Gold. “People have an intense emotional attachment to the festival, whether they were there or not.” 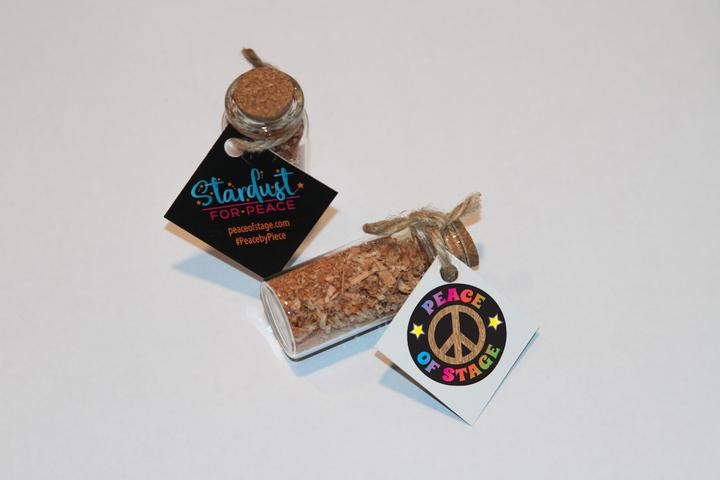 Here are more details about what Peace of Stage has to offer for Woodstock fans of varying degrees of interest:

The Peace Pendant is an ideal way to keep the spirit of Woodstock close to the heart. Sterling silver and gold plated peace signs encase an original piece of the stage and are priced at $369. Bronze- and silver-toned pendants cost $99. Every Peace Pendant has a tamper-proof hologram on the back and comes with Letters of Authenticity.

The Peace of Stage Treehugger Frame features a four-inch-square piece of the original stage. Plexiglass covers an iconic concert photo taken by a renowned music photographer, engraved plaque, and Peace of Stage logo, and is cut around the stage piece so it can be touched. It can be customized with the choice of four spectacular photos – Aerial, Colorful Stage, Jammin’ on the Stage, and View from the Stage. The environmentally friendly frame is made from mostly recycled and reprocessed materials and is priced at $319.

The Limited Edition Jimi Hendrix Frame includes a 9-inch square piece of the stage, Henry Diltz’s stunning photo of Jimi, his set list, an original ticket, Peace of Stage logo and tamper-proof hologram. The 19″ by 21” Jimi Hendrix Frame costs $999 with a portion being donated to the Jimi Hendrix Foundation, which provides free music program programs and events for local youth.

Those who want their gift to benefit others can select Stardust for Peace glass bottles containing sawdust from the original stage. The sale of every glass bottle supports each of five charities with a $3 contribution. A Stardust for Peace bottle costs $19.69 with donations going to Orange Ribbons for Jaime, Feed the Children, The JED Foundation, Vietnam Veterans Memorial Fund, and WhyHunger.