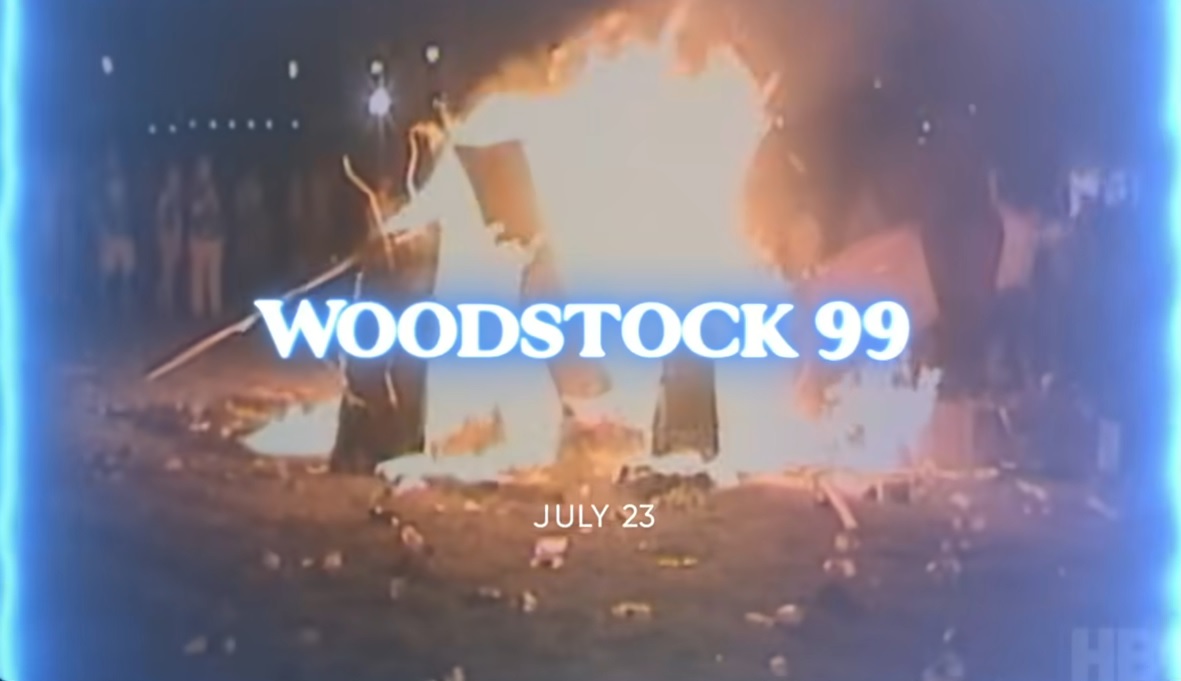 When it comes to music festivals, certain images and scenes are burned in our memories, even years after the original event. Considering Woodstock ’99 calls to mind a few specific ones: A billion (give or take) bands and musical artists playing a gigantic festival in the burning summer sun, $4 waters, unfettered chaos, and blazing trash fires.

Woodstock 99: Peace, Love and Rage is the name of a new feature-length documentary film that premiered on HBO Max on July 23 and is available to stream now. The film, directed by Garret Price and executive produced by Bill Simmons as the first entry in MUSIC BOX, “a collection of documentary films exploring pivotal moments in the music world,” pulls no punches in detailing the significant logistical issues and circumstances that played a role in the weekend’s devolution from a planned celebratory revisiting of the original 1969 Woodstock concert and its 1994 sequel, both of which had their own problems but seemed like utopian perfection when compared to the events of ’99.

Of course, paramount to telling the story of Woodstock 99 is explaining in detail the context of the time period. In this case, bubbling frustration and overt angst, the very emotions expressed by many of the male-dominated acts on the bill — a an exhaustive array of acts that took the stage over the weekend including the Red Hot Chili Peppers, Rage Against the Machine, Kid Rock, Limp Bizkit, Korn, The Offspring, Moby, Metallica, Creed, Alanis Morissette, Dave Matthews Band, George Clinton and James Brown, among countless others.

The then-popular “nu-metal” scene had exploded, a visceral reaction to the glossy boy bands that dominated the charts (and MTV) of the time, and a handful of clips depict Woodstock attendees expressing their disdain for said pop artists while interviewing with MTV personalities.

Orange County punk band the Offspring, meanwhile, even took time during their set to allow front man Dexter Holland to smash cardboard cutouts of the Backstreet Boys with a baseball bat.

It’s that reactionary, us-versus-them mentality that leads to scenes such as Total Request Live host Carson Daly being pelted by shoes, water bottles and other objects as he stands on the stage at Woodstock 99, the rowdy youth in the mosh pit rejecting the source of their despair (in this case, giving attention to *NSYNC and the aforementioned Backstreet Boys on MTV).

The entire event was a powder keg waiting to ignite — which it did, for a number of reasons.

A sentiment expressed a few times in the documentary is along the lines of “this couldn’t have been more 1999,” and that’s spot-on. It was a curious, somewhat undefined era as far as pop culture was concerned, and that lack of communal identity (which clashes with the collective antiwar sentiment of the ’69 Woodstock) was no doubt a factor in the unruly nature of the weekend and its hundreds of thousands of attendees. It didn’t help matters that Woodstock 99 came just three months after the deadly Columbine school shootings, at the time among the most devastating to date.

A lot of kids let off a ton of steam at Woodstock 99 — some even leaving behind all precepts of decency to commit sexual assaults, as covered in the film — and the weekend was a hedonistic display of human nature gone wrong.

Focus is given during the film to Limp Bizkit, at the time one of rock’s most popular acts, and specifically front man Fred Durst for “inciting” some of the destruction and chaos during his band’s performance, and that’s probably partly accurate. But at that point the weekend was already well off the rails, and the serious understaffing (and lack of training, apparently) of the festival’s security team left those “in charge” of the event woefully unprepared for what transpired.

Interviews in the documentary come from some notable performers from the weekend, including Korn’s Jonathan Davis, Scott Stapp of Creed, The Offspring’s Holland and guitarist Noodles, Jewel (one of only three female acts on the bill, which is also a point of notice in the film), Megadeth’s Dave Mustaine, Tariq “Black Thought” Trotter of the Roots and Moby, whose recalls arriving on festival grounds and feeling “off” — first because he notices his name isn’t on a decorated marquee of the acts on the bill, and second due to the unsettling vibe of the whole thing.

In terms of music journalists who help contextualize things in terms of MTV’s role in the proceedings and coverage and the music scene of the time in general, thoughtful reflections come from Steven Hyden, Rob Sheffield, Wesley Morris, Dave Holmes (then an MTV personality) and Maureen Callahan, among others.

Woodstock organizers Michael Lang and John Scher provide their own perspective on things, giving the film a layered storytelling approach that serves the subject matter well. It really was a miracle that Woodstock 99 wasn’t more deadly than it was, given the scope of the insanity that played out at a converted ex-Air Force base in Rome, New York amid the crushing mid-summer heat, and the whole story is told rather masterfully in this new doc.

Catch it now on HBO Max.