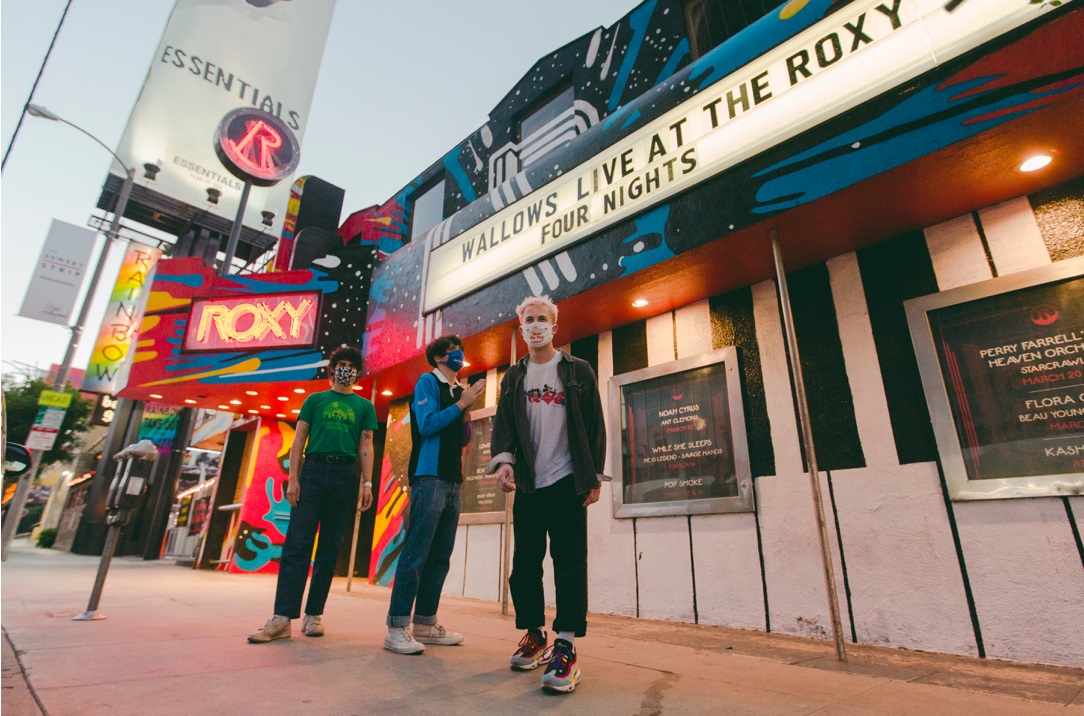 Three-piece Los Angeles indie/pop trio Wallows (featuring actor Dylan Minnette of Netflix’s 13 Reasons Why, Braeden Lemasters, an actor known for roles such as Men of a Certain Age and Cole Preston) found a way to keep its fans entertained during the COVID-19 pandemic: a “virtual world tour.”

(Click here to shop Wallows in our Rock Cellar Store).

The band, whose 2019 full-length debut Nothing Happens was an attention-grabbing collection of genre-blending indie/pop, would ordinarily be out on the road right now touring for its passionate fan base, which has blossomed in recent years thanks to the musicians’ social media presence and persona. Instead, they filmed four unique shows at the Roxy Theatre in Hollywood — performing to an audience of nobody, due to the pandemic — and are offering them up as a “virtual tour,” with four different events coming up soon.

because live shows won’t happen for the foreseeable future, we’d like to invite you to our “Virtual World Tour”! we shot 4 unique live sets at the Roxy Theater in Los Angeles (under strict COVID protocol of course). all the sets are totally different from each other and are set to air at reasonable times for different time zones (but in case you can’t make the scheduled time, whatever shows you tune in for will be available to watch until Oct. 4th). we had a blast playing even to an empty room, so we’d love for all of you to pop some popcorn, kick back, and mosh like maniacs from the comfort of your homes. tickets are $15 per show or $55 for all four

Each show’s stream date is timed with a specific audience in mind, and the band promises a unique performance each time:

SUNDAY, SEPTEMBER 13 @ 7pm BST/8pm CEST (11am PT)
‘UK & Europe Show’
Wallows have picked their own set list for this show

If you haven’t caught an actual, in-person Wallows concert yet, let this be your introduction.

In mid-March, right around the beginning of the pandemic’s hold over everything, Wallows premiered a new song, “OK,” a catchy and groove-oriented new song with a delightfully 1990s-inspired music video:

The group also recently premiered a cover of The Beatles classic “With A Little Help From My Friends,” donating proceeds from the single to Feeding America. Its video was also a 1990s throwback:

As soon as life returns to “normal” — or whatever “normal” means by then — and live music can return, expect big things from Wallows. A few head-turning music festival appearances under their belt, Minnette, Lemasters and Preston are poised for a bigger breakout than they’ve already had.