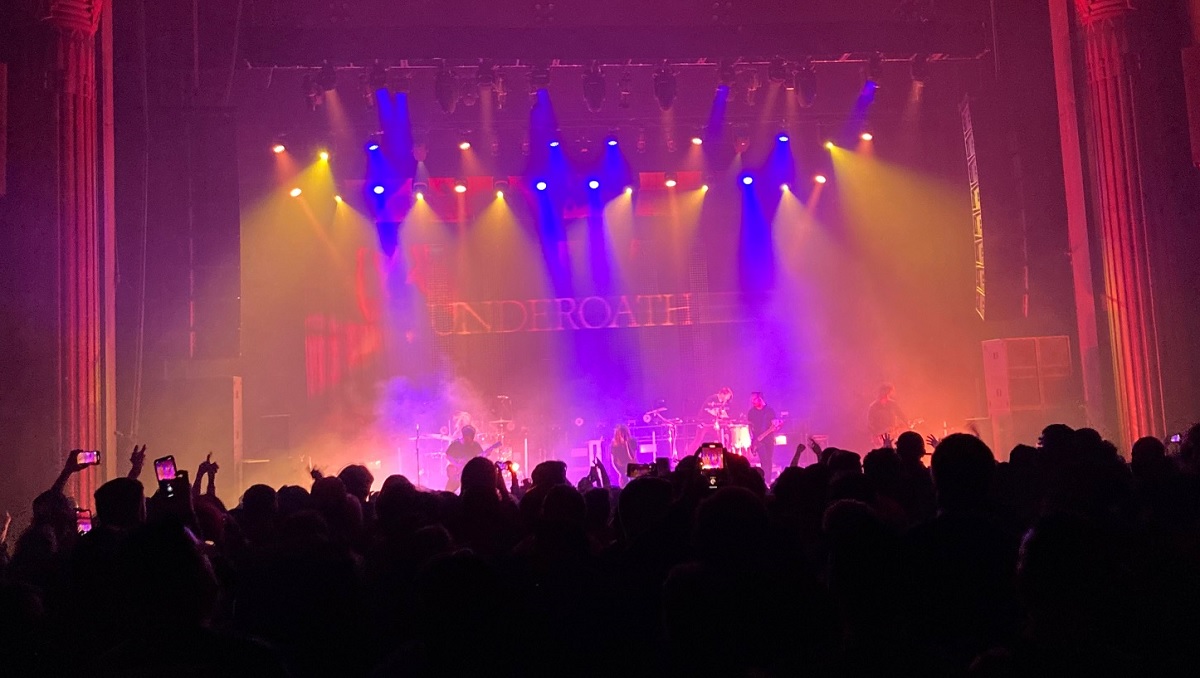 At one point during the headlining set from Underoath on Thursday night at the Wiltern in Los Angeles, vocalist Spencer Chamberlain remarked that this past week of live gigs were the band‘s first on an actual headlining tour in nearly 900 days — and the enthusiastic, appreciative energy of that fact from both sides of the stage was mutual.

Except for some festival appearances, Underoath hasn’t embarked on a proper headlining tour since before the pandemic. This new tour, supporting the Tampa, Florida band’s intense and emotional ninth album, Voyeurist, came with heightened anticipation as a result.

This is a group that cut its teeth on the Vans Warped Tour on its way to becoming “scene” heroes, a trajectory that built a legacy made evident at the Wiltern. Underoath’s albums over the years bridge the gap between melody and aggressive “metalcore,” their songs’ subject matter veering into deeply introspection — a result of the musicians’ move away from the devout Christianity that guided much of their early days.

This lends itself to a powerful performance, and Underoath delivered one in kind on Thursday, part of what proved to be a stacked bill of acts.

Long Island-based hardcore/metal band Stray from the Path kicked things off with a frenetic, high-energy set of songs from throughout its 10 studio records, quickly winning over the still-arriving crowd.

Lead singer Thomas Williams, with his dyed blonde hair and bright orange camo pants, bounded around the stage, leading the charge on socially conscious songs about topics like police brutality and how the alt-right and fascists “aren’t welcome in the hardcore community.”

LOS ANGELES TONIGHT AT THE WILTERN. SHOW IS SOLD OUT. PHOTO BY @GabeThePigeon pic.twitter.com/IbWz1rLYSB

Theirs is a style of confrontational, mosh pit-ready metal/punk, with “First World Problem Child”  a crowd favorite. By the end, the performance likely earned Stray from the Path some new fans.

Up next was Bad Omens, an addition to the Voyeurist tour after Buffalo-based hardcore/metal band Every Time I Die broke up a month or so ago. A stark stylistic shift from what came before (and later) on the night, Bad Omens turned in an especially noteworthy performance.

With a sound that almost reminds one of Bring Me the Horizon‘s less “deathcore” stylings, Bad Omens took the stage an hour before its new album, The Death of Peace of Mind, hit streaming platforms. A few records in, the group has developed a mesmerizing live show, pulsating colored strobe lights providing a backdrop for front man Noah Sebastian to sing (and occasionally growl) his vocals in near darkness.

⁣The Death of Peace of Mind⁣
Out now ⁣
⁣
Listen from front to back together with us during the live steamed listening event tomorrow, at 9AM PST Friday. Rewatch available through the weekend.⁣
⁣https://t.co/bghqGd2tn5 pic.twitter.com/CflXhVtVt6

It was a strong performance of the type that catches you in your tracks, makes you stop and ask yourself, “whoa, who IS this band?”, which many in attendance seemed to do for their abbreviated time on stage. It’s not far-fetched to imagine Bad Omens graduating to their own headlining status at venues like the Wiltern sooner rather than later.

On that same topic of bands on the cusp, Spiritbox was next. In all honesty, the excitement in the crowd almost made it seem like this was the headlining act.

Earning a direct support slot on this tour on the strength of its debut full-length album, Eternal Blue, Spiritbox’s set felt like an event. For those unvitiated, Courtney LaPlante’s voice is the name of the game here, her ability to deftly and seamlessly transition from clean singing to heavy metal growling/screaming and back is a major attractor to the group’s music.

Her voice was an electrifying presence during their six-song set, which featured this otherworldly howling at the end of “Holy Roller”:

.@spiritboxband at @wiltern last night was an *event*, and @corklezlaplante’s voice is probably still reverberating around the walls. Just thunderous stuff. pic.twitter.com/TWwRNviGPL

Their first gig in Los Angeles since the release of the record, LaPlante and Spiritbox put forth a simply stunning performance, one that no doubt satisfied the (many) fans that came to the Wiltern adorned in Spiritbox merch. This band is destined for big things in the world of heavy music.

After the dust settled and Spiritbox left the stage, a mysterious figure in a lit-up face mask took the stage as a recording addressed the crowd, encouraging everyone to truly “feel” the atmosphere and embrace the circumstances that brought them there, to the theater, this specific night. It was almost a mindfulness exercise, really, and set the tone for the enveloping performance that was to come from Underoath.

Backed by a pulsating light show, Underoath jumped around its lengthy discography during its set, touching on Warped Tour-era favorites like “Reinventing Your Exit” and “A Boy Brushed Red Living in Black and White,” also touching on new songs like “Hallelujah,” “Damn Excuses” and “Thorn.”

While at some shows fans seem unfamiliar or less enthusiastic about a headlining act’s new material, the Voyeurist songs here received similar rapturous reception to that of the fan favorites, indicative of the connection Underoath clearly has with its fan base.

That helped build the performance’s undying energy, which only faded after the last note was played and the house lights came on.

With the Voyeurist tour, Underoath and its tour partners have put together an especially strong tour spanning generations of hard-rock/hardcore energy, and it’s one you’ll want to catch if it heads to your town in the weeks ahead.