Turn Me On: Singer/Songwriter/Producer Fernando Perdomo

Less than a year ago, Fernando Perdomo released Out to Sea, a sonically dynamic and thoroughly memorable instrumental prog rock album on which he plays every instrument on almost every song, along with being the sole songwriter, producer and engineer. Perdomo quickly followed with Zebra Crossing, a blending of his prog sensibilities with his equally accomplished identity as a prolific singer-songwriter, largely recorded in one ten-hour session at Abbey Road Studios. He also completed Out to Sea 2, another vivid, compelling and immersive song cycle being released in February, now available for pre-order on Bandcamp.

This output alone would solidify the thirty-eight-year-old’s reputation as a uniquely versatile musician and multi-faceted artist. Yet Perdomo also owns and operates Reseda Ranch Studios, where he produces a broad spectrum of artists ranging from glam rock’s revered Debutante Cait Brennan, to the female-fronted, grunge-infused heavy rock band Little Dove. In addition, Perdomo serves as the lead guitarist in The Dirty Diamond, a band playing “British-inspired, alternative desert rock with psychedelic overtones.” Their debut album, From the Stars, is slated for release in Spring of 2019. As even these highlights barely scratch the surface of Perdomo’s twenty-year career and the bounty of exciting projects to come, it seemed like a fitting time to speak with the Miami-to-Los Angeles transplant about his previous output, current projects and what’s ahead.

Perdomo remembered of his time in high school, “Rock Ensemble. It was like an after school cover band. We had the best teacher in the world, Doug Burris. Doug was quadriplegic from multiple sclerosis. Yet he taught four classes of guitar a day, recording studio classes, then stuck around until about 6:00pm everyday teaching Rock Ensemble. We did an album. We had a recording studio. We learned how to do all of that stuff. That’s an incredible thing. It got me thinking, ‘This is what I want to do for the rest of my life.’ I knew it from this exact moment, right here. At fifteen years old playing ‘Fixing a Hole.’”

After high school, Perdomo performed with a variety of Latin pop artists, as that was the predominant genre in Miami. That led to recording with Cristian Castro, one of the most successful Latin artists of the past several decades. Perdomo played on Castro’s 2003 album, Amar Es, and the hit single, “No Hace Falta”.

Perdomo then spent approximately the next decade working tirelessly as a recording and touring sideman, producer and co-writer, along with forming the band Dreaming In Stereo. After recording their debut album, Dreaming in Stereo were signed to a management deal with Bill Aucoin, best-known for managing Kiss and Billy Idol. After Aucoin died unexpectedly in 2010 from surgical complications due to prostate cancer, Dreaming in Stereo ultimately dissolved and Perdomo relocated to the Reseda neighborhood of Los Angeles in 2012.

In late 2014, Perdomo was asked by Dave Kerzner, best known as a founding member of the prog band Sound of Contact, to participate in the recording of his first solo record, New World. This led Perdomo down the rabbit hole that’s resulted in him being a treasured member of the prog community, making increasingly frequent and outstanding albums as his artistry veers into an ever more progressive direction. Of this journey, Perdomo reminisced, “Dave calls me one day and says, ‘I want to do a solo project. I’m going to bring in Steve Hackett [from Genesis] and a bunch of great guitar players. But I need someone to be the meat and potatoes guitar player on the record.’ I came in, and as usual, sprang into action and started doing all sorts of things. I ended up playing most of the guitar on the record. And then played all the bass on the record. It was a major success in the prog world. The next thing you know, he lets me know that we were booked on Cruise to the Edge in 2015. And that’s where things really took off for me in prog. People were like, ‘Who is this guitar player for Dave Kerzner? Who’s this nutty guy?’ And I met all these people in the prog world.”

As Perdomo’s prog career was solidifying, he was also working with psychedelic folk singer Linda Perhacs and co-producer Chris Price on The Soul of All Natural Things, Perhacs’ sophomore album released in 2014, forty-four years after her debut. While on tour with Perhacs, Perdomo found himself in Malmo, Sweden, where his career ended up taking another meaningful turn. Perdomo recalled, “One of my favorite bands of all-time is The Cardigans. I decided to call Tambourine studios, which is the studio where they recorded all their classic albums. I called and saw if they had any open time. I went in there, and I recorded a song in about three hours before soundcheck, co-produced with Cardigans’ producer Per Sunding.”

The resulting song was “On Sunday Morning”, a standout track from Perdomo’s debut full-length solo album, 2014’s Warm. This began a personal and professional odyssey that Perdomo has been on ever since, recording his music, when possible, in the studios most regularly frequented by his biggest influences.

After releasing Voyeurs in 2016, an album recorded entirely while the process was being broadcast on Facebook Live, Perdomo recorded 2017’s The Golden Hour at Ardent Studios in Memphis, Tennessee. While the iconic facility has been used by the likes of Led Zeppelin, Leon Russell and James Taylor, the studio is most closely associated with the band Big Star, whose last surviving member, drummer Jody Stephens, serves as CEO. After next recording Out to Sea entirely at Reseda Ranch Studios, Perdomo found himself in England last summer while on tour with Kerzner. Perdomo used the opportunity to book a session at Abbey Road Studios where he recorded much of the recently released Zebra Crossing.

“I decided to call Abbey Road and see if they had any time available. They had a cancellation on the 25th of July, 2018. I started working on the album here. What I did was I created skeletons of the songs. Click tracks, guide acoustic, guide piano. Worked up some ideas. And then took that hard drive over to Abbey Road. I laid down all the drums. That amazing drum sound. I laid down a lot of vocals on one of the original Beatles’ microphones. I laid down all the pianos. I laid down some guitars. From being fifteen years old playing ‘Fixing a Hole’ to heading out to Abbey Road, twenty-two years later. Sitting down on the same piano that was used for ‘Penny Lane’. Tracking my music. On my terms. My career has all been about full circle. That was an incredible moment for me.”

Fifty years to the day after George Harrison recorded the first acoustic takes of “While My Guitar Gently Weeps”, Perdomo decided to invite a handful of friends to Abbey Road to record a “live” version of the song that serves as one of the highlights of Zebra Crossing. Another standout track is “We Were Raised With Headphones On” which Perdomo co-wrote with Cyndi Trissel. Trissel, an award-winning film editor, directed, shot and edited an endlessly delightful music video that serves as a perfect companion piece to a song that’s genuinely smile and groove-inducing. After premiering the video in November of 2018, Perdomo finished the year with Zebra Crossing being on the list of 2018 albums recommended by Wilco.

Wilco recommends, we listen. Hear a selection of the bands' favorite albums from 2018 on @Spotify : https://t.co/yfXL4gqeqw pic.twitter.com/13eHFx9KHF

In addition to releasing Out to Sea 2 and the aforementioned Dirty Diamond debut album, Perdomo has a slate of projects in the works for 2019, including producing the next album from Dr. Danny of The Lemon Twigs. Perdomo also played lead guitar on an extensive amount of music for the upcoming “Echo in the Canyon” documentary and accompanying soundtrack. The project finds Perdomo reinterpreting the most beloved songs of the iconic Laurel Canyon music scene alongside living legends from that era (including Eric Clapton, Neil Young and Brian Wilson) and their musical progeny (including Fiona Apple, Beck and Regina Spektor). Though an official date hasn’t been announced, Perdomo hopes the film and soundtrack will be released sometime in 2019. Perdomo will also be making his first appearance with the Wild Honey Orchestra at the Alex Theater in Glendale on February 23rd, recreating The Kinks Are the Village Green Preservation Society and other Kinks classics from the era to raise money for the Autism Think Tank.

To turn yourself on to Fernando Perdomo, go to https://fernandoperdomo.bandcamp.com to listen to Perdomo’s extensive discography and find all titles available digitally and on CD, or https://www.fernandoperdomo.com for more information about Perdomo and Reseda Ranch Studios. 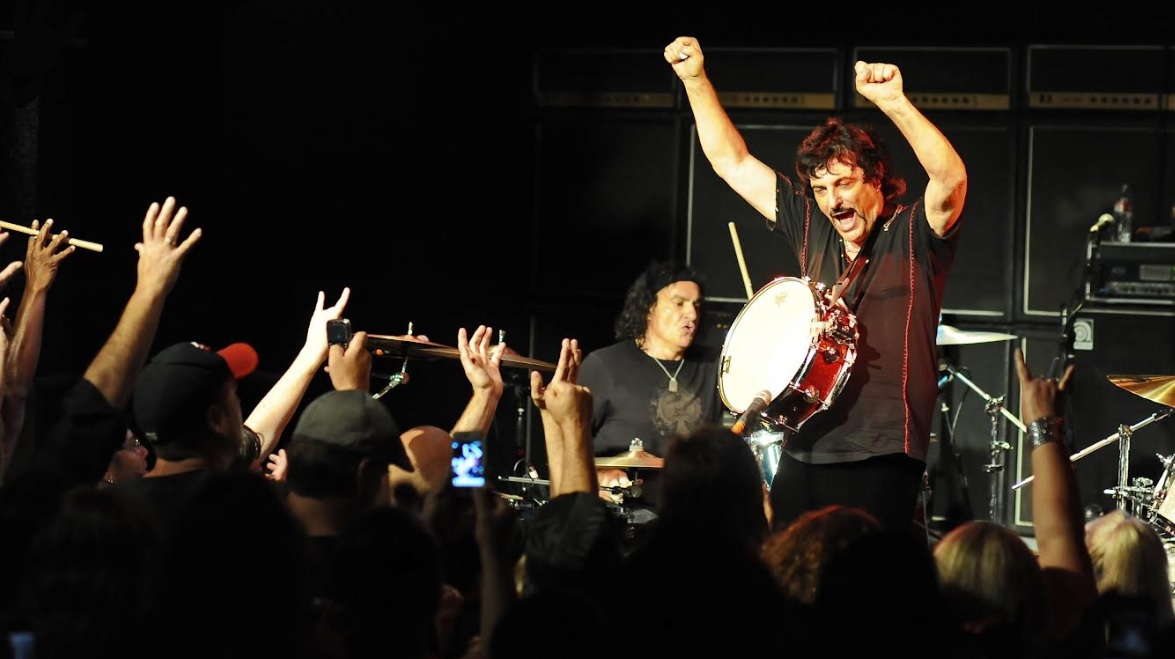