Home / Turn Me On: Circles Around the Sun

Turn Me On: Circles Around the Sun

Guitarist Neal Casal and keyboardist Adam MacDougall are best known as indispensable members of the Chris Robinson Brotherhood, an outstanding live band due largely to their ability to seamlessly blend jam-band, blues, country, soul, southern rock and psychedelic influences in their endlessly energetic, melodic and captivating shows. The Chris Robinson Brotherhood, often referred to as CRB, was formed by Robinson in 2011 as a side project to the now defunct Black Crowes.

As is known to happen in the prolific and amorphous culture of jam bands, what started as side project/offshoot now spends almost the entire year on the road, with 2018 marking the fourth consecutive year CRB has played over 200 shows across America and Europe. And, as also happens on a recurring basis in the national jam band scene, a noted side project has begat an increasingly beloved side project of its own. Casal and MacDougall, along with bassist Dan Horne and drummer Mark Levy, have now spent the last three and a half years further exploring their ongoing musical dialogue in the psychedelic instrumental outfit Circles Around the Sun.

Circles Around the Sun, often referred to as CATS by their members and devotees, originated in 2015 as the Grateful Dead were getting ready to play their five “Fare Thee Well” shows. Filmmaker Justin Kreutzmann approached Casal, asking him to compose and record the music that would play before the shows and during set break.

Casal recently spoke with Rock Cellar by phone while on East Coast leg from the annual CRB Fall-Winter tour. Casal reminisced about CATS beginnings, “Justin asked specifically for music that sounded like The Dead and touched on some of their melodies from time to time. I think Justin felt that I was the person to do it, because it wouldn’t sound like a cover band. I just kind of thought about the Dead shows, and the Jerry Garcia Band shows, that I used to see. And I thought, ‘What kind of music would I want to hear if I were at a show?’ It would be music that felt very familiar, and sounded familiar in a way. Without folding it into another band’s music or some other atmosphere. But at the same time, you wouldn’t want to hear a Grateful Dead cover band before the Grateful Dead came on. So finding a balanced place to explore something that was kind of connected to the band, but still remained our own.”

While the music CATS created was meant to begin and end with its presentation at the “Fare Thee Well” shows, the band has since been on a three and a half year journey that’s included releasing two albums, 2015’s Interludes for the Dead and 2018’s Let It Wander. And since their first performance at Lockn’ Festival in 2016, they’ve also become a nationally-embraced live band. What’s most impressive about the history of Circles Around the Sun is that them continuing to record and tour has come about entirely as a response to how enthusiastically the band has been received by much of the audience of CRB.

When recently speaking with Rock Cellar by phone, MacDougall ruminated on why so many Deadheads have so strongly embraced Circles Around the Sun. “We have a great time doing it. CATS is a blast for us. I think that translates. It’s just really fun. Just four guys being themselves. We immediately had a connection when we got in the studio the first time. And we’re very lucky that we can bring a small idea to the table, and within ten or fifteen minutes, just between the four of us, it turns into something much larger. We are very sympathetic players toward each other. And that’s just lucky. And I think that when we do our shows, we just really enjoy it.”

While CATS’ first release, Interludes for the Dead, featured selections from the “Fare Thee Well” shows that were heavily influenced and informed by the Grateful Dead, the newly released Let It Wander showcases the band’s remarkable ability to craft equally compelling and enjoyable jams completely from scratch. For the band’s sophomore effort, CATS took greater advantage of the technology that Castaway Seven Studios in Ventura, CA had to offer, including overdubs, more sonic and layered effects, and a guest appearance by hip hop iconic Chuck D on the appropriately titled “One for Chuck”.

But the most impressive achievement of Let It Wander, is that while the production value feels much greater, and the album benefited from a slightly longer gestation period in the studio, Let It Wander still maintains all of the intimacy, immediacy and intensity of the band’s unforgettable live shows. When asked how the band reached this delicate balance, Casal gave credit to J.P. Hesser, who co-produced alongside Casal and MacDougall, and engineered and mixed the record with mix assistance from MacDougall.

Casal remembered, “J.P. Hesser, he has everything to do with the sound of the record. And improving upon the phonics of the first time, that’s for sure. I know that he had a lot of improvements that he wanted to make. We didn’t discuss too much before going in, really. We didn’t have time. Everybody’s on tour with their other bands. It was just kind of an unspoken thing. We just wanted to branch out. And make it better. Make it stronger. Make it sound better. Make the songs even better. And just move the thing forward.”

While CRB was recently on a brief Thanksgiving break, CATS played three shows in California, including one at the Teragram Ballroom in Downtown Los Angeles. While there was room for obvious speculation as to how well a show held on Black Friday might sell, the 600-seat ballroom appeared to be close to capacity. What made the evening especially fun and memorable was that although CATS’ set stretched slightly over two hours and was entirely instrumental, the audience was superlatively attentive, joyous and responsive to the music throughout the entire show.

Casal said of playing live, “It’s definitely a big challenge to keep an audience engaged through an evening of music with not one word being sung, that’s for sure. But it’s also liberating, too. Because sometimes when you’re playing songs, you’re kind of locked into their forms. And there’s only so much you can do with them after a while. With CATS, we’ve just been able to break free of all of that. We play whatever we want, within the very loose forms that those songs have. It can be very challenging to do an entire night of instrumental music. But our chemistry is so good. And that makes our sound so cool. The danceability of our show is kind of the thing that we lean on the heaviest, in a lot of ways. Our goal is to get people moving. And to keep them moving. And then for ourselves, as band personalities, to just fade into the background.”

CRB is currently on tour promoting “Betty’s Midwestern Magick Blends”, the fourth entry in the “Betty’s Blends” series of live releases made available to fans largely through digital formats and/or direct distribution to independent record stores. Casal and Horne are also members of The Skiffle Players, an all-star band making “acoustic dance music”, featuring the multi-faceted talents of Farmer Dave Scher and Aaron Sperske (former bandmates of Casal’s from the alt-country band Beachwood Sparks) and Cass McCombs. Their second album, Skiff, was recently released, and is available in a number of formats on Bandcamp. Casal hopes the Skiffle Players can play live in 2019 if scheduling allows. Casal also shared that CRB has “a new record that’s been finished and is ready to come out. Next Spring, maybe June.”

While CRB’s touring schedule becomes seemingly busier with each passing year, Casal and MacDougall continue to try and find opportunities to play with CATS. Looking to the future, MacDougall beamed, “We’re going to try and do as much CATS as we can. We’ve been just starting to think about new ideas and certain things to get another record going. We’re insanely lucky that we even have the chance. This is the most serendipitous situation I’ve ever been in in my life.”

To turn yourself on to Circles Around the Sun go to www.circlesaroundthesun.com to listen to and buy Interludes for the Dead and Let It Wander, find January tour dates for Colorado and New York, and check out shirts, signed posters and watch exciting videos. 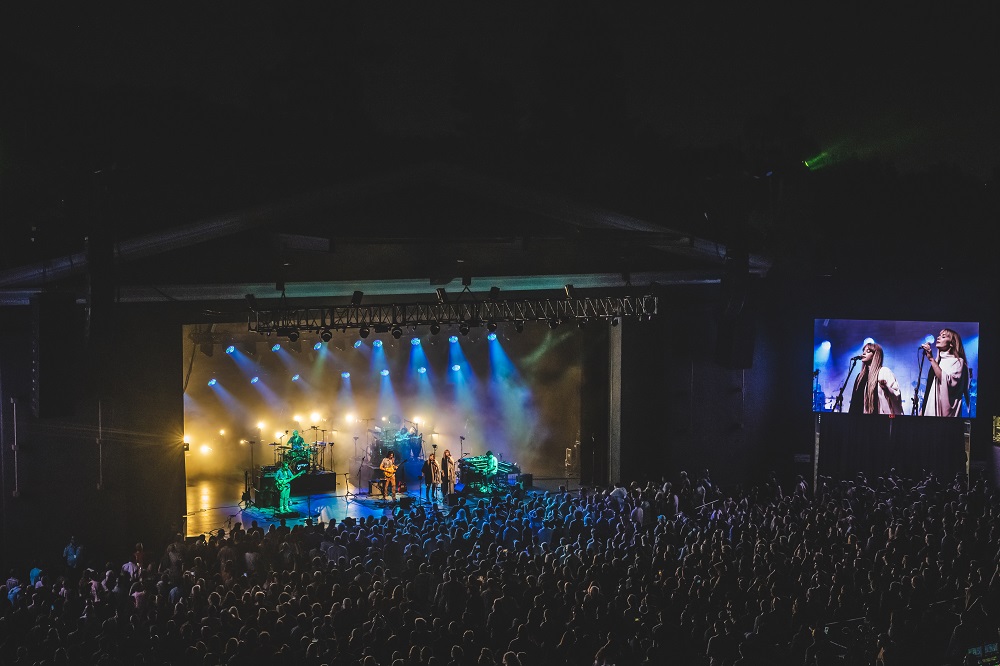 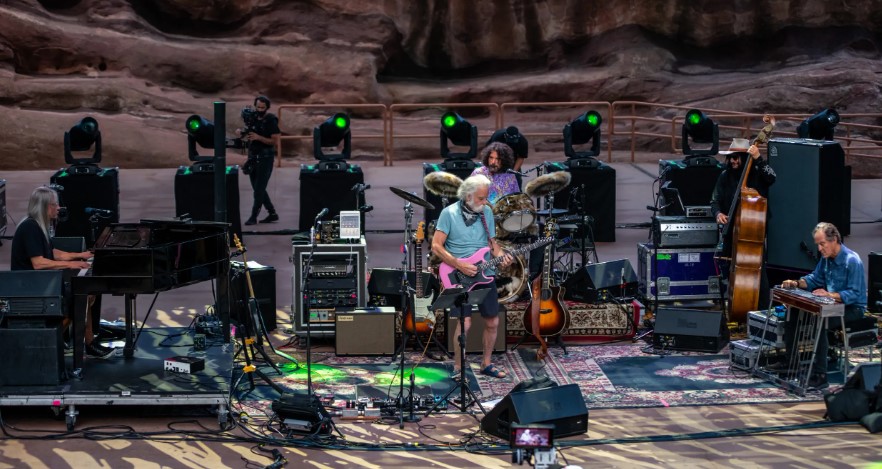