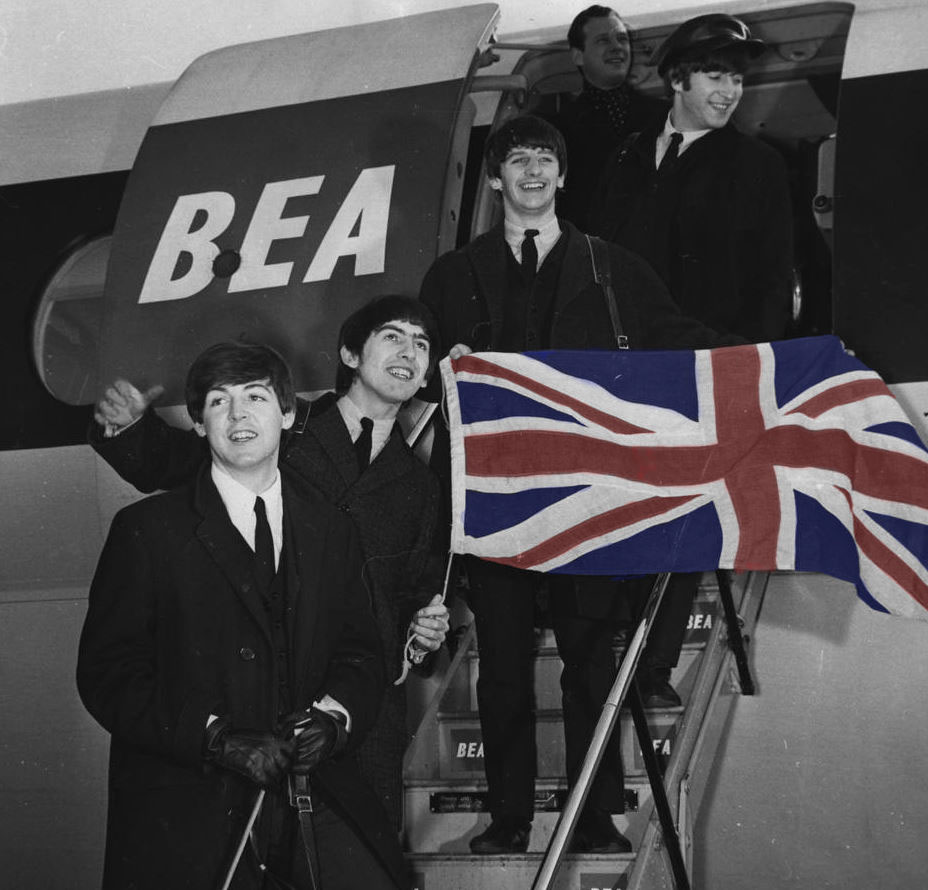 Until 1964, Americans imagined Brits as businessmen in bowler hats and stuffy butlers who served tea. The Beatles‘ arrival on our shores changed all that. We grew our hair, dressed in Carnaby Street fashions and overnight, British words like “fab” and “gear” entered our language.

But Beatles lyrics contain many expressions that many American fans still don’t understand, even decades later.

The title character of “Mean Mr. Mustard” is not as nasty as his name implies: “Mean” in Britain means “cheap.” John Lennon explained in All We Are Saying that he’d spotted a news story about a man who took extreme measures to avoid spending money: “I’d read somewhere in the newspaper about this mean guy who hid five-pound notes, not up his nose but somewhere else. No, it had nothing to do with cocaine.”

From that Lennon wrote, “Keeps a ten-bob note up his nose / Such a mean old man.” A bob is British slang for a shilling, a small denomination of money no longer in use. Bonus: Mr. Mustard’s sister Pam (“She never stops, she’s a go-getter“) was originally named Shirley. Lennon changed her name to better segue into “Polythene Pam.”

“Penny Lane” is a nostalgic look back at the Liverpool “roundabout” or traffic circle where Lennon and Paul McCartney would meet as teens. The lyrics include British phrases like “a four of fish” (four cents worth of fish and chips) and a banker’s “mac” (short for “mackintosh,” or raincoat), but most puzzling is “a pretty nurse is selling poppies from a tray.”

The lyric refers to a tradition that goes back to the aftermath of World War I, when blood-red poppies bloomed on the Belgian battlefield of Flanders. Hundreds of thousands of soldiers are buried there. A symbol of their sacrifice, poppies are sold by hospital staff in Britain on Remembrance Day to raise money for injured service personnel.

“I Am the Walrus” is part nonsense and part Lennon’s childhood memories. In John Lennon: In My Life, longtime pal Pete Shotton described how Lennon dreamed up “Semolina pilchard climbing up the Eiffel Tower“: “He thought of ‘semolina’ – an insipid pudding we’d been forced to eat as kids and ‘pilchard’ – a sardine we often fed to our cats.”

Lennon, who felt Bob Dylan was “getting away with murder” with impenetrable lyrics, intended to show he “could write that crap too.” “The words don’t mean a lot,” Lennon said in Anthology. “People draw so many conclusions, and it’s ridiculous.”

George Harrison‘s “Savoy Truffle” was inspired by his friend Eric Clapton‘s inability to resist chocolate. “At the time he had a lot of cavities in his teeth and needed dental work,” Harrison wrote in I, Me, Mine. “He always had toothache but he ate a lot of chocolates – he couldn’t resist them and once he saw a box he had to eat them all.

“He was over at my house and I had a box of Good News chocolates on the table and wrote the song from the names inside the lid.” A look at a Good News box of the era shows the creme tangerine, coffee dessert, ginger sling and montelimart used in the song.

Lennon suffered bouts of insomnia during the Beatles’ 1968 retreat with Maharishi Mahesh Yogi in India. “I’m meditating all day and couldn’t sleep at night,” John said in All We Are Saying, which inspired him to write “I’m So Tired.”

Some have puzzled over one line: “Although I’m so tired / I’ll have another cigarette / And curse Sir Walter Raleigh / He was such a stupid get.” Brits know Sir Walter as the 17th century explorer who introduced tobacco in the UK. For that misdeed, John insults Raleigh in cockney style as a “stupid get”: a moron or a fool. Payback: In the end, Raleigh was beheaded for treason.

“A Day in the Life” is comprised of two segments, written individually by Lennon and McCartney. The song opens as Lennon relates the news of a fatal car crash and ends with the problem of 4,000 potholes in the town of Blackburn.

Paul’s middle section speeds up the tempo as a harried commuter rushes to work: “Found my coat and grabbed my hat / Made the bus in seconds flat / Found my way upstairs and had a smoke / And somebody spoke and I went into a dream.” Many Americans thought “upstairs” meant up to an office, but Paul was really heading to the open-air upper level of a double-decker bus, where smoking was permitted. Bonus: When Paul sings, “Found my way downstairs and drank a cup,” he means tea, not coffee.

“Maxwell’s Silver Hammer” was McCartney’s tune about a homicidal maniac, Maxwell Edison. “The song epitomizes the downfalls in life,” McCartney explained in Anthology. “Just when everything is going smoothly – Bang! Bang! down comes Maxwell’s silver hammer and ruins everything.”

We know Maxwell is in trouble when Paul sings, “P.C. 31 said we’ve caught a dirty one / Maxwell stands alone.” But who is P.C. 31? In Britain, P.C. stands for “Police Constable,” or as we say in the US, a cop. Bonus: The “clang clang” of Maxwell’s hammer was made by Ringo Starr, who pounded on an anvil.

McCartney was inspired to write “She’s Leaving Home” after reading a newspaper story about Melanie Coe, a young runaway whose father said, “I cannot imagine why she should run away. She has everything here.” McCartney and Lennon then crafted the poignant song about a girl who is “meeting a man from the motor trade.” “It was just fiction,” McCartney said in Many Years From Now. “Like the sea captain in ‘Yellow Submarine,’ they weren’t real people.”

In Britain, a man from the motor trade is a car salesman. Melanie later said that many things in the song paralleled her life, but not that. She instead ran off with a casino croupier.

“Cry Baby Cry” was based on the nursery rhyme “Sing a Song of Sixpence.” Its lyrics imply that something’s not quite right: “The Duchess of Kirkcaldy always smiling and arriving late for tea / The Duke was having problems with a message at the local Bird and Bee.”

British pub crawlers often refer to their neighborhood taverns as “the local”; Kirkcaldy is a town in Scotland where the Beatles played two shows in 1963. But what do birds and bees have to do with it? The answer is in the centuries-old British custom of naming pubs after animals, like the “Hen and Chickens.” Hunting themes like “Fox and Hounds” and “Dog and Duck” are also popular. Lennon chose the fictional “Bird and Bee” as the pub where the Duke received that unsettling message.

American music fans know the Isle of Wight as the site of the famous rock festival. A half-million people swarmed the British island in 1970 to see stars like Jimi Hendrix, the Who and the Doors. But the Isle of Wight is better known by Brits as the UK’s “retirement capital.” That’s why McCartney chose the site for “When I’m Sixty-Four”: “We could rent a cottage in the Isle of Wight if it’s not too dear.” In Brit-speak, “not too dear” means “not too expensive.”

Though recorded for the Sgt. Pepper album in 1966 (the year McCartney’s dad turned 64), Lennon said in Anthology that his bandmate wrote the tune years earlier when the Beatles performed at the Cavern: “It was just one of those ones that he’d had, that we’ve all got, really; half a song. And this was just one that was quite a hit with us. We used to do them when the amps broke down, just sing it on the piano.”

After Charles Manson interpreted “Helter Skelter” as a coded message that commanded him to kill, the title came to mean apocalyptic chaos in the US. McCartney said that when he wrote “Helter skelter / It’s coming down fast,” the expression’s meaning in the UK was innocent. A helter skelter is a playground ride in which you climb up a tower then descend down a spiral slide.

“I was using the symbol of a helter skelter as a ride from the top to the bottom,” McCartney explained in Many Years From Now. “And this was the fall, the demise, the going down. You could have thought of it as a rather cute title but it’s since taken on all sorts of ominous overtones because Manson picked it up as an anthem.”

Any other great phrases you can think of from the Beatles’ catalog of music? Let us know in the comments!