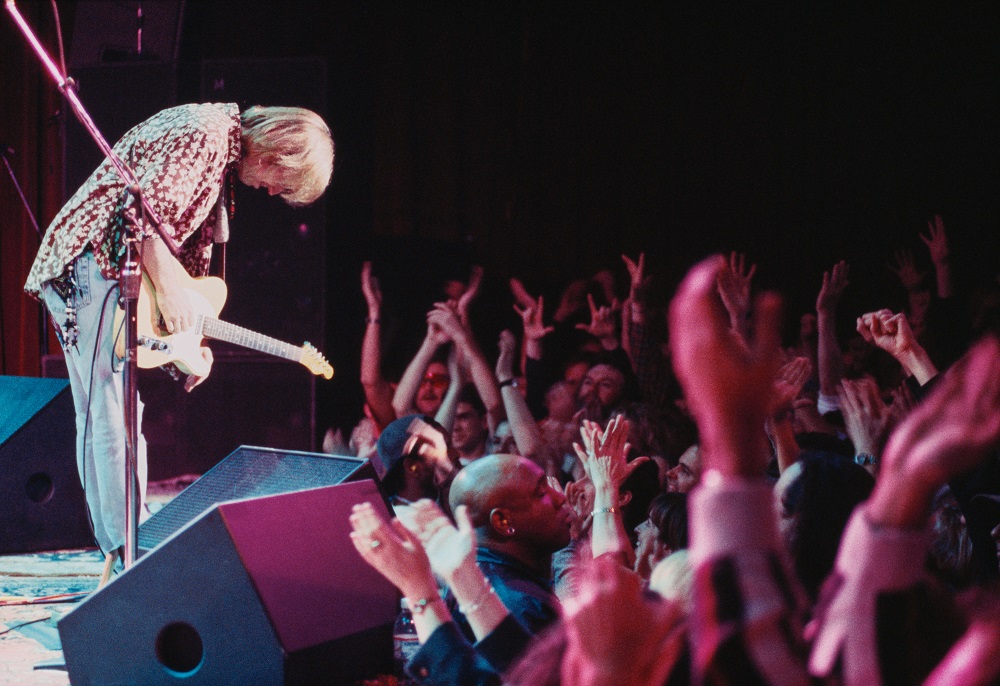 Due out on Nov. 18 is Live at the Fillmore 1997, a collection from Tom Petty & the Heartbreakers commemorating the ensemble’s 20-night stand at the famed San Francisco theater that further cementing the group’s place as one of the most electrifying live acts around.

First announced in late September, the collection has now been previewed with previously unseen behind-the-scenes footage in the form of a nine-minute short film titled “The Fillmore House Band.” Take a look:

This new live album — the first from the iconic group in 13 years — will be released on Nov. 25 via Warner Records.

Live at the Fillmore 1997 features a wealth of recordings from the fabled residency, which Petty previewed before the shows with this quote to the San Francisco Chronicle:

“We’re musicians and we want to play. We’ve made so many records in the past five years, I think the best thing for us to do is just go out and play and it will lead us to our next place, wherever that may be.”

Here’s a performance of “I Won’t Back Down,” shared as a preview of the live set:

This past Saturday, the University of Florida Gators celebrated its inaugural Tom Petty Day with a special halftime performance during the football game.

Thank you @FloridaGators, @GatorsFB, @UFGatorBand and #Gainesville for all of the incredibly moving TPATH tributes! It was a truly unbelievable inaugural #TomPettyDay. Can not wait for the years ahead. Go Gators! pic.twitter.com/ck0fItCOwE

At the game—which was nationally broadcast on ESPN—the team’s helmets featured the iconic Heartbreakers’ logo and the sellout crowd enjoyed special Tom Petty & The Heartbreakers tribute performances by Florida’s spirit teams and an elaborate and remarkable halftime show by the marching band. All culminating in what has quickly become one of the most beloved traditions in sports, with the 90,000-plus fans in attendance joining together for a magical, chill-inducing sing along of “I Won’t Back Down” that rang loudly throughout the stadium.

A post shared by Tom Petty & The Heartbreakers (@tompettyofficial)

The product of a collaboration between both the Petty estate and Heartbreakers alumni, Live at the Fillmore 1997 was curated by producers Ryan Ulyate and Mike Campbell and executive producers Benmont Tench, Adria Petty, Annakim Petty and Dana Petty.

Said Campbell in reflection about those shows:

“Playing the Fillmore in 1997 for a month was one of my favorite experiences as a musician in my whole life. The band was on fire and we changed the set list every night. The room and the crowd was spiritual… AND… we got to play with some amazing guests. I will always remember those nights with joy and inspiration.”

A news release mentions that Live at the Fillmore 1997 — and thus several of its performances — trace Petty’s path from an aspiring singer/songwriter to the living legend he was at the time, through several cover songs of artists Petty held dear to his heart:

This album features more covers than originals, paying tribute to the artists and songs that shaped Petty’s love of music as he was growing up—before he became a legendary songwriter and performer in his own right. Highlights include Bob Dylan’s “Knockin’ On Heaven’s Door,” J.J. Cale’s “Crazy Mama,” The Rolling Stones’ “Time is On My Side” and more from The Kinks, Everly Brothers, Bill Withers, The Byrds, Chuck Berry and Booker T. & the M.G.’s. The collection also features special performances with The Byrds’ front man Roger McGuinn and blues legend John Lee Hooker. Other standouts include extended versions of original tracks “Mary Jane’s Last Dance” and “It’s Good To Be King.”

Live at the Fillmore 1997 will be available in a variety of formats. Stay tuned for pre-order links from our Rock Cellar Store.

The 2 CD set includes 33 tracks, 18 of which are covers—2 hours of music. The tri-fold board package includes a 16-page booklet with previously unseen photographs.

The 3 LP set includes 33 tracks, 18 of which are covers—2 hours of music. The tri-fold sleeve includes a 4-page insert.

The 4 CD deluxe edition includes 58 tracks, 35 of which are covers – over 4 hours of music. The 4 CDs are packaged in a box with a 32-page booklet (with previously unseen photographs), 3 custom guitar picks, a replica All Access laminate, and an embroidered patch (“The Fillmore House Band” —a term that was bestowed on The Heartbreakers during the shows at the Fillmore).

The 6 LP deluxe edition includes 58 tracks, 35 of which are covers—over 4 hours of music. The 6 LPs are packaged in a box with a 24 page (12” x 12”) booklet (with previously unseen photographs), 3 custom guitar picks, a replica All Access laminate, facsimiles of 3 set lists, a reprint of the 8-page Fan Newsletter published in 1997, and an embroidered patch (“The Fillmore House Band” —a term that was bestowed on The Heartbreakers during the shows at the Fillmore).

And the track listing for the 4-CD version, so you can appreciate the scope of this archival release: