Home / GIVEAWAY: Enter for a Chance to Win Tickets to See Grammy-Winning Rock/Metal Band Ghost on its Fall Tour

GIVEAWAY: Enter for a Chance to Win Tickets to See Grammy-Winning Rock/Metal Band Ghost on its Fall Tour

Swedish hard rock/metal band Ghost is preparing to head out on a big North American tour this fall, and the band’s profile couldn’t be bigger.

Ghost hit it big in recent years, picking up a Grammy Award in 2016 for the track “Cirice,” and two years later topping the Billboard rock charts for the third time with the track “Dance Macabre,” of the record Prequelle.

Some more on the band and how it’s become something of a big deal in recent years:

Ghost’s widely acclaimed live performances are known for raising an ungodly ruckus, and that will only be amplified as the band brings its stage production to arenas. Cardinal Copia and the seven Nameless Ghouls will perform for more than two hours on a striking stage set resembling a medieval cathedral with a backdrop of illuminated stained-glass windows that pay tribute to the three now-departed Papas. In addition to rich costumes, special effects, and a spectacular light show tailored-made for arenas, the Cardinal and the band will take advantage of a series of multi-level platforms and walkways to prowl around on while performing some of Ghost’s fan-favorite songs from the band’s albums and EPs catalogues. The set list will include favorites “Square Hammer,” “Cirice,” “Ashes,” “He Is,” “Year Zero,” “Rats,” “Mummy Dust,” “Life Eternal,” “Dance Macabre,” and many more. 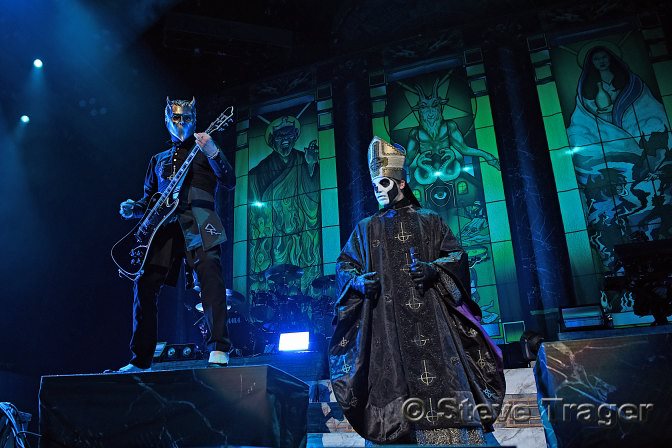 In September, Ghost will embark on another North American tour, a six-week trek that will find the band accompanied by Nothing More — and Rock Cellar has teamed up with Live Nation to offer some tickets to “The Tour Named Death” for five lucky winners.

Those five winners will receive a pair of tickets to a show of their choice on the tour. All you have to do is enter using the instructions below and we’ll let you know if you’ve won.

Here’s the schedule of tour dates, from which the winners will select a show:

You can enter the giveaway below by signing up for our e-mail list and joining the Rock Cellar Community. Already a member of our online community? Don’t worry — just enter using the form below and you’ll be signed up!

**Please note that transportation and lodging are not included in the giveaway — only concert tickets (to be picked up at Will Call day-of-show). The winners will be responsible for any travel, lodging, parking, etc., associated with the prize. Also: Giveaway open to U.S. residents only.**

Sweepstake only applies to select dates on the tour (as listed above).

Our winners will be able to pick up their tickets at the venue’s Will Call before show time.

The prize(s) that may be awarded to the eligible winner(s) are not transferable, redeemable for cash or exchangeable for any other prize.

Sweepstake opens Wednesday, July 24, 2019 and ends on Wednesday, August 14, 2019 at 12:00 P.M. Pacific, at which point our winners will be randomly selected from all eligible entries. Winners will be contacted using their method of entry and will then have 48 hours to contact Rock Cellar Magazine (the Company) confirming their interest in the prize.

***Transportation/lodging is NOT provided by the Sponsor or the Company to winners — only concert tickets (picked up at Will Call day-of-show)  are included. The winner will be responsible for any travel, lodging, parking, etc., associated with the Grand Prize.

If a winner cannot be contacted or is disqualified for any reason, the Company reserves the right to determine an alternate winner or not to award that winner’s prize, in its sole discretion.

Open to legal U.S. residents 18 and over.

Odds of winning depend solely on the number of eligible entries submitted before sweepstake closes on August 14, 2019.

Void where prohibited by law.