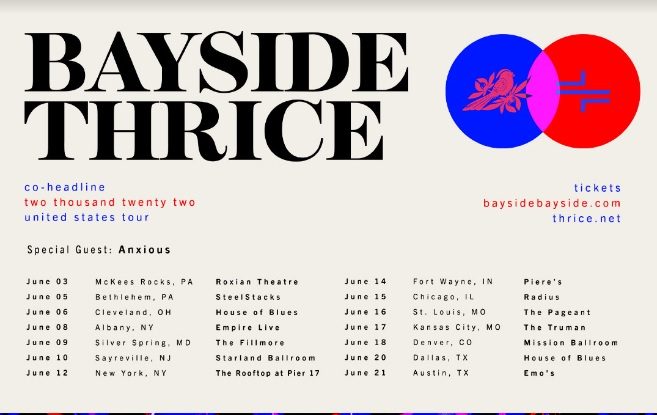 Genre-defying Orange County band Thrice will team up with veteran Queens, New York-based alt/punk rockers Bayside for a co-headlining tour in June, it was announced on Tuesday. Providing support for the tour will be young pop/punk band Anxious.

A Thrice/Bayside billing is an intriguing one for fans of early-to-mid 2000s’ Vans Warped Tour scene, where both bands cultivated dedicated fan bases that continue to exist to this day. As a result, this tour will no doubt be a great time for those interested in a mix of nostalgia for the era — but also to appreciate where each band is today.

Thrice’s most recent album was last September’s Horizons/East, another layered, conceptually deep album of shapeshifting musicality and expression from the band that was paired with a fall tour exhibiting the group’s dynamic live experience.

We are excited to announce that we will be joining @BaysideBand for a co-headline tour in June! Pre-sale tickets are AVAILABLE NOW at https://t.co/Fv5cOzWgKB. General on-sale starts Friday at 9am PT/12pm ET. pic.twitter.com/NZtHd22kko

“We had a blast on our Horizons/East headline tour last fall and can’t wait to get back on the road with Bayside and Anxious and share more of the record with you all.”