Home / The Small Faces’ Landmark Concept Album Turns 50: ‘Ogdens’ Nut Gone Flake’ and the Beginning of the End of an Unsung Band

The Small Faces’ Landmark Concept Album Turns 50: ‘Ogdens’ Nut Gone Flake’ and the Beginning of the End of an Unsung Band 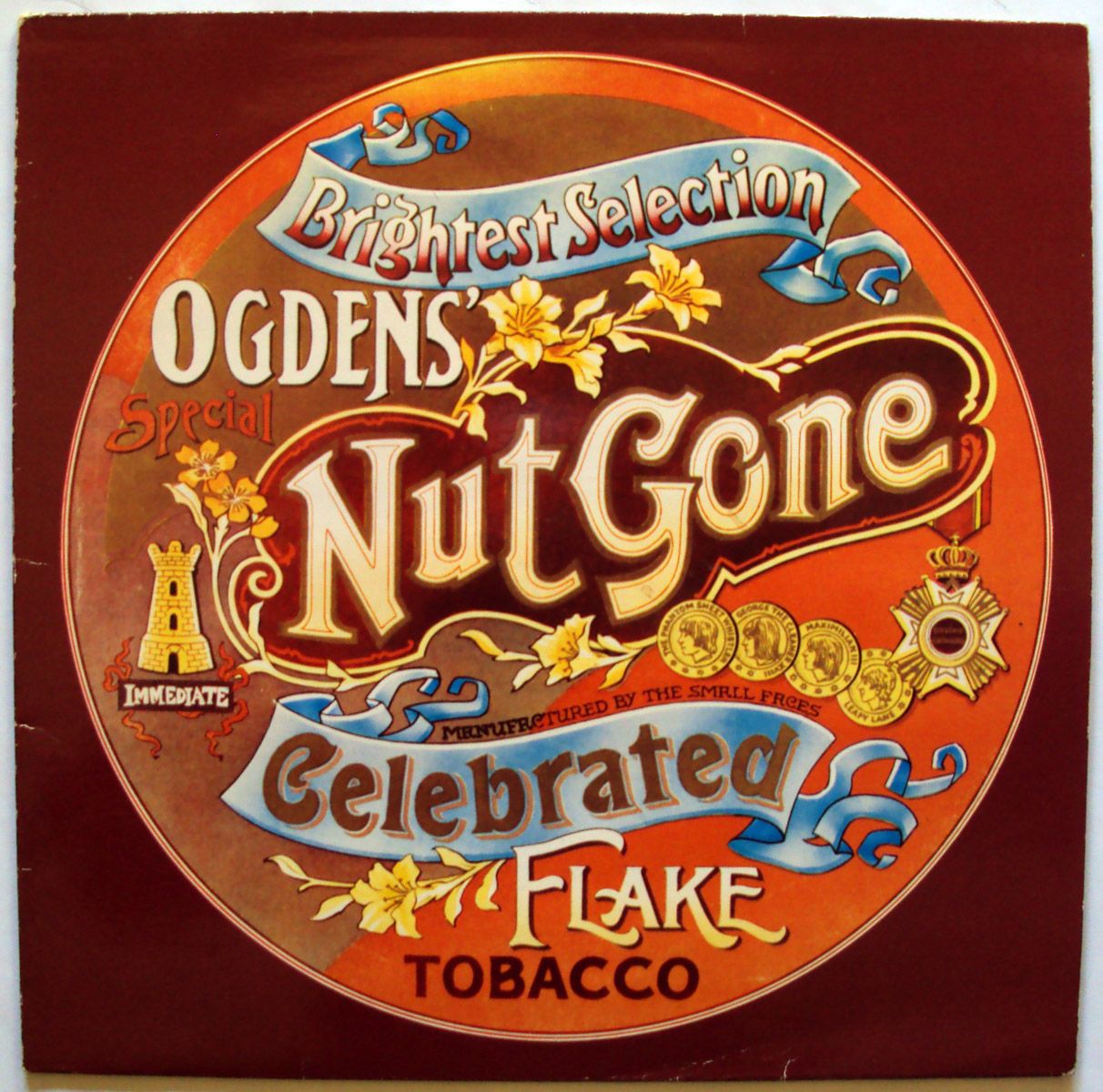 “We should have gone to America, and we wanted to go to America, but we’d had a drug bust, so we couldn’t go,” the Small Faces’ drummer Kenney Jones told me in 2012 of why he thinks his former band, although Rock and Roll Hall of Fame inductees, never broke in America.

“Our manager Don Arden didn’t trust anybody to look after us in America, anyway, because he was afraid he’d lose control of us. But we all conquered America anyway – Steve with Humble Pie and us with The Faces – but I think that if we had gone I think we’d be up there with The Who.”

Fifty years ago, the Small Faces released the quasi-conceptual masterpiece Ogdens’ Nut Gone Flake. It went on to top the U.K. charts for six weeks and, like The Beatles’ Sgt. Pepper’s Lonely Hearts Club Band, The Who’s The Who Sell Out and The Kinks’ Village Green Preservation Society, it changed the course of rock and roll forever.

Jones recalls the birth of Ogdens’ in loving detail in his forthcoming memoir Let the Good Times Roll, out this autumn.

Born from the wild, fertile mind of bassist Ronnie Lane — about the fictitious Happiness Stan and his search for the half of the moon unseen from earth, and who ultimately discovers that life is nothing but a bowl of All Bran cereal – it’s a half-baked concept, for sure. Taking up only one side of the album (half of the tracks had already been recorded when the band stumbled on the idea during a joint boating excursion), it’s still structurally adventurous and sonically stunning.

Full of great songs and lots of laughs, in the form of the gobbledygook narration by Stanley Unwin, whom the band enlisted, after British comedy giant Spike Milligan turned down the gig, to help hold the piece together, it represented the moment in the 1960s when pop and rock ceased existing together easily. Housed in a round sleeve, based on a tin of tobacco, it was a psychedelic statement writ large.

But Side One of Ogdens’ Nut Gone Flake, oft overlooked as a result of the legend that’s built up around the concept piece of Side Two, is just as remarkable. Full of Marriott’s theatricality, not to mention his barn-burner R&B belting, and Lane’s lazy, hazy Cockney charm, it’s the sort of creative tension that made The Beatles so unique and compelling.

Witness the unapologetic Englishness of “Lazy Sunday,” the ballsy soul of “Afterglow” and the near template for 70s rock in “Song of a Baker,” and it’s obvious that, in Ogdens’ Nut Gone Flake, the Small Faces had constructed the blueprints to most of what was to come over the next fifty years, from the Faces and Humble Pie, which grew from the band’s ashes, to Bowie, Blur and Oasis, to name just a few.

“It’s the perfect Small Faces album, isn’t it?” Paul Weller asked, when we discussed the album in 2015. “It’s got that hard-hitting R&B they were already known for, but with a punch that hadn’t existed previously. The Happiness Stan bit is a bit rubbish, sure, but ‘Rene’ and ‘Rollin’ Over’ have got an amazing swagger. The Faces before they even existed. And it’s got ‘Afterglow,’ which is such an amazing tune.”

“There were instruments there that were leftover from a film score that had been recorded at Olympic, one was like a theramin, so we just used them,” the band’s keyboardist, the late, great Ian McLagan told me of the recording of “Afterglow” in 2012. “It’s such a great song. Steve and Ronnie would come in with an idea that we would develop, but that one was Steve’s and when he brought it in he knew what he wanted. And Steve’s voice on that is just too good.”

“All these years later, listening back to it, every song sounds like a hit to me,” Jones recalled of the album. “It’s amazing to me, because we were all so incredibly young!”

Released countless times over the years – and at least seven times on CD alone – the album will reportedly get a 50th anniversary spiffing up later this year, complete with the original mono mix that packs the real wallop.

“We were following in the footsteps of the Beach Boys and The Beatles and the Stones,” McLagan recalled of the heady days after the band had cut ties with Arden and Decca Records for the artist-friendly environs of Andrew Loog Oldham’s Immediate Records. “The Beatles were off the road, Brian Wilson was off the road, the Stones had taken a break. We did the same. Plus, at IBC studios, where we cut our early tracks, we only had a 4-track. There really wasn’t much you could do on that. But once we got to Olympic, which had an 8-track, we couldn’t believe it. We felt like we could do anything, and the sound was bigger and better. And Glyn Johns, our producer, was loving it.”

“I felt like I was in an orchestra,” agrees Jones of the artistically adventurous sessions.

Legendarily recorded over the course of a year, McLagan recalled that the actual time spent recording was in fact probably no more than three weeks in total.

“We always did a gig after being in the studio,” McLagan said. “It was all so quick I barely remember it.”

“We were always rushing around,” Jones agreed. “But once we left Don Arden and signed up with Andrew Loog Oldham and Immediate, there was no real pressure to keep putting out hit after hit. And we were like a finely tuned machine by that point, anyway, so we really blossomed in the studio, I think.”

“We all had our jobs to do,” McLagan said of the band’s line-up. “But now Stevie could play piano while I played Hammond, so that added a whole new dimension. And he and Ronnie were like Lennon and McCartney, because their writing was constantly moving and developing.”

For McLagan, joining one of the biggest band’s in the U.K.in 1965 had been a dream come true. Now, barely three years later, his bandmates were like brothers.

“When I joined up, I was just floating,” McLagan said of the moment he joined what was then one of his favorite bands. “But by the time of Ogdens’, Steve and Ronnie were real supportive of my writing. And once we got to Ogdens’, and we were developing ideas more and more in the studio, there was no denying that we were all contributing, so that’s how the co-writes came about.”

After several years of juggling their tough sound, which drew adoration from young mods, with the screaming girls who came to their shows as a result of the string of hit singles that Marriott and Lane were turning out, the Small Faces were ready to move on.

“We were dying to shed our teenybopper image,” Jones told me. “We were an R&B band, not a pop band.”

“Ronnie had the idea about Happiness Stan,” McLagan recalled of the loose theme that tied Ogdens’ together. “So as the songs were written, we’d try to steer them in that direction. It wasn’t like later, where you take a month or more to work on it. We were still doing gigs. But now and then we’d get three or four days in the studio at one go and we’d really go to town.”

Ogdens’ Nut Gone Flake proved the Small Faces were hardly a spent creative force, but when Loog Oldham released the cheery but poppy ‘Lazy Sunday’ as the first single from Ogdens’, the band members, already under intense pressure to head for the U.S. for a make-or-break tour, hit the collective ceiling.

“We were all so pissed off,” McLagan remembered. “Just like ‘Sha-La-La-La-Lee’ had been released without the band’s consent and drove everyone mad, having to play it night after night, ‘Lazy Sunday’ was like that, but after years of problems and hassles. It was the beginning of the end.”

After a high-pressure and ultimately disastrous tour of Australia with The Who, and the mooted break-out tour of the U.S. on the horizon, Marriott walked off stage in the midst of a New Year’s Eve gig at the end of 1968. The end of the Small Faces was on the horizon, even as Ogdens’ Nut Gone Flake had secured the band’s status among the upper ranks of the burgeoning rock firmament, as evidenced even in the half-hearted miming the band did of Side Two of the record for the BBC’s late night music television show Colour Me Pop.

“Steve had bought a house in Epping, and there was a church local to him that we were going to use to rehearse and record,” McLagan recalled. “But he wanted Pete Frampton to join the band, and we all said, ‘No way!’ We loved Pete, but that just wasn’t the Small Faces to the rest of us. His playing is beautiful, but it didn’t have the fire that the rest of us had. So it was a sad ending, and lots of unfinished business, because Steve just went, ‘Fuck it. I don’t want to play all the guitar. I want to sing.’ He formed Humble Pie and we, eventually, became the Faces with Rod Stewart and Ronnie Wood. But I do think we really had a lot of great work ahead of us, and it’s a shame it had to end when it did.”

“For a long time I was fine it was over,” Jones remembered. “I think that Stevie would have been more artistically satisfied if we’d gotten to the U.S. and had been recognized for what we were really about, but that, sadly, wasn’t to be. Now I’m a fan, and the music lives on.”