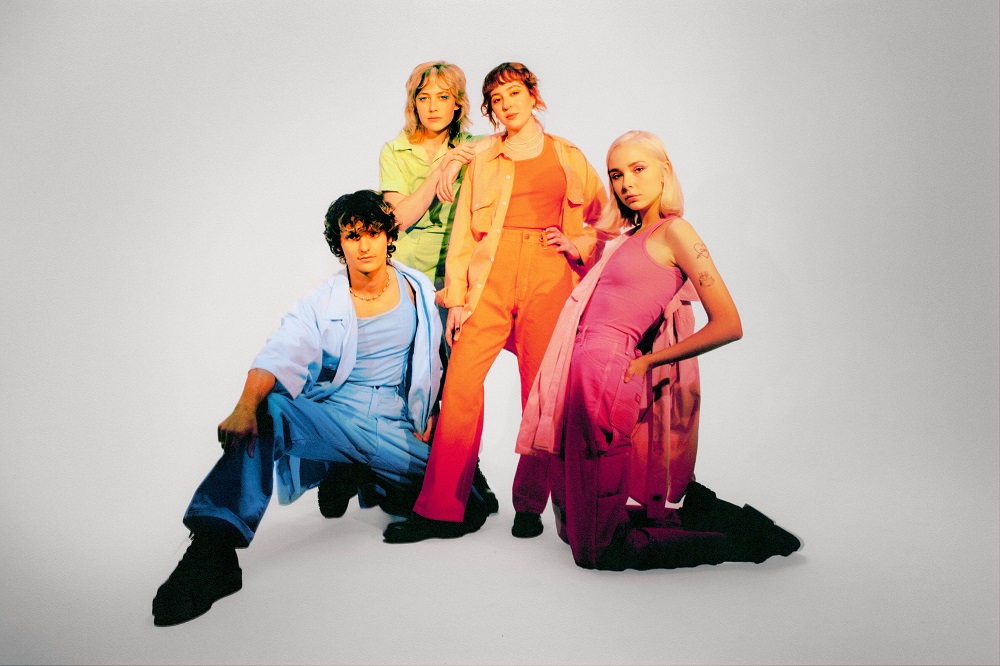 Gotta get the fuck out of L.A./Run from the sun before it burns my brain. That’s part of the chorus of “Monday,” a deliriously catchy new song from The Regrettes, a four-piece pop/punk band that arrived on Friday.

Among the first bit of music from the band since 2019’s solid How Do You Love?, it’s very much the result of pandemic-era anxiety, with lyrics referencing existential crises and that general feeling of malaise that hit us all (and may still be hitting many of us all) due to the past year and a half or so.

our new song and video ‘monday’ is OUT NOW. we came up with this concept back in january while we were all dancing to old katy perry and black eyed peas lol. thank u so much to everyone involved, we are so grateful for u all. welcome to #mondaymiddle y’all https://t.co/A0SiWoiCmh pic.twitter.com/wjKndW71oT

Musically, however, “Monday” and its early-2000s-era music video are bright, bouncy and extremely catchy — this is a song you’ll have in your head after one listen. Also, keep your eyes peeled for a quick Olivia Rodrigo cameo during the prom sequence as she tries to navigate technical issues caused by a finicky iPod click wheel:

The “Monday” video was directed by Dillon Dowdell, who it’s worth pointing out directed a similarly nostalgic video for Los Angeles pop/rock band Wallows back in April 2020, a 1990s-inspired trip through a drive-thru fast food joint.

As for the song’s origins, here’s how Night described its process:

I wrote our new song “Monday” on Zoom during the pandemic with my producer Tim Pagnotta and talented writer Michelle Buzz.

At the time I was pretty much at the peak of my anxiety disorder, every morning I was waking up and absolutely dreading the idea of functioning and being “productive” (whatever the hell that even means) for another day. Like most of us, I was still at home, where all my issues still existed. So, whatever I was dealing with didn’t slowly fade away while stuck in traffic on the way to go write somewhere. I didn’t have the space to think of “what do I want to write about”, instead, I just rolled out of bed and all my horrible fucking thoughts were still with me, just waiting to be unboxed.
As LA locked down, I felt a huge part of my Identity and ego being stripped away because of no touring, and no connecting with people at our shows. I’ve been touring since about age 12, so I had to come up with a new way to function in the world.  It was really rough, and still is rough, but I found writing this song to be super therapeutic.

It’s special that this is the first song we’ve put out in a while because it’s an important moment in time for me to mark. Part of the healing process for me is really learning and trying my best to keep on dancing the pain away so I hope people can relate to that and dance with me, even if it’s not at a show and in the safety of their own kitchen.

Stay tuned for more on the Regrettes, who landed on Rock Cellar’s list of bands to see at Coachella 2020 thanks to the wave of buzz that was solidified with their How Do You Love? record … before there was no Coachella 2020.

If “Monday” is any indication, the group’s new material/album will be a big hit.