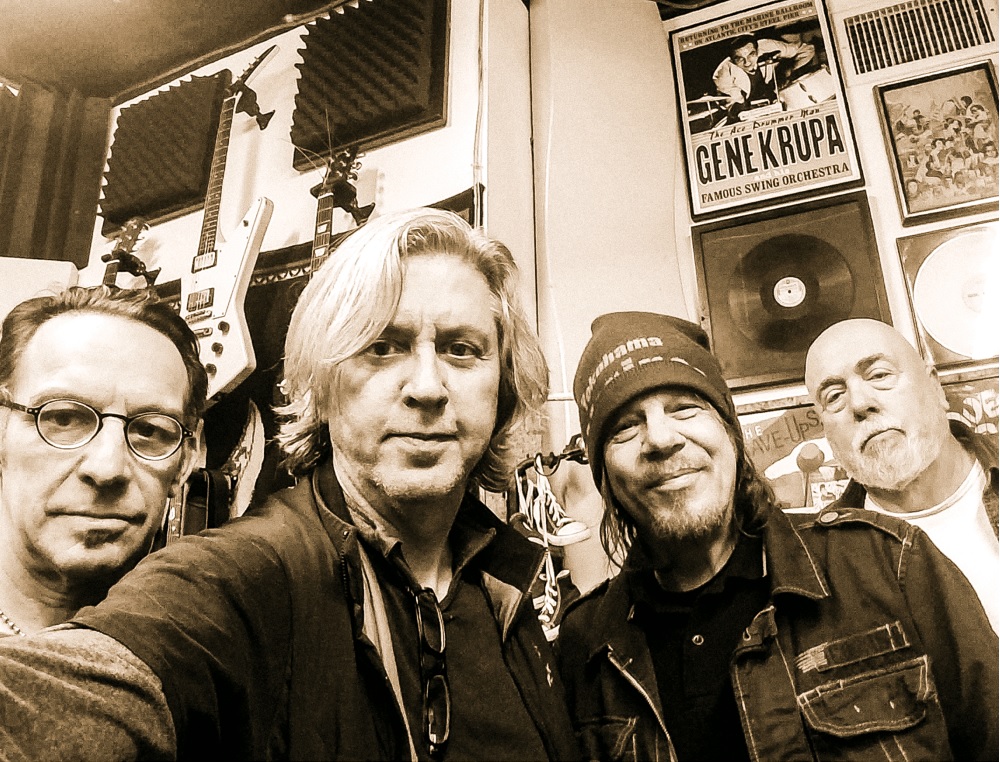 In 2019, When Jimmer Podrasky started making new music with his Rave-Ups bandmates for the first time in decades, he remembered how good their three studio albums were and didn’t see a need to reinvent the wheel.

“I had no desire to suddenly make The Rave-Ups a hip-hop/rock band or something else because the times had changed,” said the singer/songwriter/guitarist, in a phone interview from his home in Los Angeles.

“In my mind, it wasn’t broke, so it didn’t need fixing. I wanted it to sound like The Rave-Ups and I wanted Terry Wilson to take guitar solos.”

There are plenty of choice examples on Tomorrow, the band’s new reunion record. The frequently engaging Americana effort is out now via Omnivore Recordings.

Standout “How Old Am I?” finds Wilson’s clarion call guitar work evoking The Clash. Podrasky said it pays homage to the British punk band’s “Police on My Back” and The Replacements.

Podrasky studied English at Carnegie Mellon University and formed The Rave-Ups there in 1979. After several musician changes and some shuffling between Pennsylvania and California, the group’s “classic” lineup finally solidified in 1984 with drummer Timothy Jimenez, bassist Tommy Blatnik and Wilson (all were A&M Records mailroom employees). The following year, they released acclaimed indie debut album Town & Country, which featured the underground hit “Positively Lost Me.”

Soon after, The Rave-Ups were a prominent part of LA’s burgeoning cowpunk scene. Molly Ringwald was a big fan (Podrasky dated her sister) and the teen actress’ character in Sixteen Candles carried a notebook emblazoned with the band’s name.

Then she convinced director John Hughes to cast The Rave-Ups during a Pretty in Pink nightclub scene, where the group performed “Positively Lost Me” and “Rave Up, Shut Up.” Ironically, A&M released the popular soundtrack in 1986, but failed to include The Rave-Ups’ selections. MTV booked the quartet on the televised film premiere party.

Due to record contract issues, another two years elapsed before The Rave-Ups made their major label bow with The Book of Your Regrets. Podrasky cites it as his favorite among the catalog, and is still baffled that Epic staff did not put more muscle behind the company’s new signing.

“It always kills me: Why did they choose not to promote it? I don’t even think they printed up 5,000 copies! ‘Town & Country’ sold 10 times more; so did ‘Chance,’ the record after that, when they finally decided to promote the band.”

The Rave-Ups’ inviting mix of folk, rock, power pop and alt-country (before it was a “thing”) didn’t fit squarely into one particular genre or coterie of music groups during the Eighties.

“We were one of those bands that seemed to straddle the fence between the roots rock scene of Los Angeles – The Blasters, The Long Ryders, Rank and File – with the Paisley Underground – Green on Red, The Dream Syndicate,” recalled Podrasky. “We were at home in both camps. We were never part of any scene. That might have been the reason why Los Angeles wasn’t a huge fan of The Rave-Ups. We did better in other cities.”

The singer has fond memories of a Spring 1988 theater tour opening for The Church and The Mighty Lemon Drops.

“These were not bands you would associate The Rave-Ups with. Hell, the very last tour we played together in 1990, we opened for the Indigo Girls! You know what? All three acts, even though they weren’t similar to the Rave-Ups, were unbelievably kind to us. So were the audiences. We were never booed by anybody or not given attention.

“With The Church tour, we were playing in front of pretty large crowds,” he continued. “The Church had that huge hit [“Under the Milky Way”] at the time. They were great to us. Same with the others. The crowds were great; the bands were great. We somehow made it work for us.”

Podrasky left the music business to raise his son – except for a brief spell in the mid-1990s as The Lovin’ Miserys with ex-Concrete Blonde drummer Harry Rushakoff – and worked as a script reader for the William Morris Agency.

By the time Omnivore Records released a deluxe edition of the long out-of-print Town & Country in 2016, The Rave-Ups were back to playing LA clubs on a semi-regular basis. Podrasky wanted to make a reunion album, but his bandmates were not too keen on the idea. So, the singer continued making solo albums (often with Wilson) and collaborated with vocalist Syd Straw.

The seeds for Tomorrow were sown after Wilson produced and co-wrote the songs for Podrasky’s Almost Home, Again in 2019. He suggested they re-record an earlier Jimmer solo tune they’d done with the other Rave-Ups as the rhythm section.

“I said to him, ‘If you’re playing on it, I’m playing on it and they’re playing on it – it’s not a Jimmer song, it’s a Rave-Ups song,” said Podrasky. “I pulled a fast one and said, ‘I’ll meet you guys over at Tim’s studio.’ I knew that Tim would be the first one there, so I [arrived] really early. I also knew Tom and Terry probably would be late if history was correct. I immediately told Tim that I didn’t think we should be laying down drum tracks on the song” that Terry suggested.

Instead, Podrasky opted for the feisty “Violets on a Hill,” which the band played for a Town & Country re-release party in 2016. “Tim and I began working on it before Tom and Terry showed up. By the time they did, we were knee deep into cutting the track.

“We had a great time working on it and everything went from there. I said I had some songs in my back pocket. Terry had some stuff he was working on. What if we just kept doing it? We made a new Rave-Ups record and it was a natural progression.”

Through the years, Podrasky has penned several appealing character study songs. The hopeful “Roll” continues the tradition with star-crossed lovers Joey and Rosie.

“That was almost a weird alternate universe of ‘Sue & Sonny’ and ‘Please Take Her (She’s Mine)’” off Regrets. “Same girl, by the way. When Terry sent me what he recorded in the studio, I loved what he had done. I just decided to write a story song and it happened quickly.”

The deeply personal “Coming After Me” initially was about a dark, depressing period in Podrasky’s life when LAPD officers turned up, said he was a threat to himself, applied handcuffs and placed the musician on a ‘5150’ hold.

Podrasky played part of the song for Wilson, who assumed it revolved around the ongoing terrible situation at the southern U.S. border “and the heartbreak happening there. Then I realized he was right … what I’d written up to that point could easily be interpreted” that way.

“I changed the focus, but kept the overall sense of paranoia, fear and a desperate search for hope.”

The Rave-Ups front man said he doesn’t really find singing about autobiographical matters to be a cathartic experience.

“I can’t think of a more self-deprecating breakup song than ‘Positively Lost Me.’ It says more about me than it does about her. Same thing with ‘Please Take Her (She’s Mine),’ ‘Sue & Sonny’ or even on the ‘Chance’ record – ‘She Says (Come Around).’ They’re all very self-deprecating. It’s hard to write about people I’ve lost. But it was harder for me to write a song about the death of my dad than it was about the screw-ups I made in my life.

“I don’t mind going down that rabbit hole because it’s me. I’ll take the hit. Sometimes, when it’s a subject matter that’s near and dear to my heart, it’s harder to write about. ‘How Old Am I?’ was written in 1990, not long after my dad passed away. We just never got around to recording it.”

An even older tune the band revisited for Tomorrow is the whimsical “Brigitte Bardot.” The “silly little song was written during the ‘Town & Country’ period in ’85 and didn’t make the cut” on the second album.

Other members of the band “were hell bent on doing it and I did everything I could to talk them out of it,” said Podrasky, who felt the song was too dumb. Everyone else thought the sentiment was pure fun and sounded exactly like The Rave-Ups.

“They were so right. I couldn’t have been more wrong about it, because when I did finally play rough mixes for people I trusted, that was the song they loved” and it made them smile. “I’m thankful to Terry and Tim and Tom for making sure that we did that. It was worth it. Had it been left up to me, I would’ve said, ‘Let’s not even bother.’ What the hell do I know?”

Jimenez and Wilson oversaw production and engineering for the new album. The band was almost done recording before the pandemic hit.

“Then it dawned on me that something was missing … Going back to Town & Country, there were always a few songs that used pedal steel.” Marty Rifkin – who Podrasky calls “a monster player” and contributed to Chance as well as Podrasky’s solo efforts – returned.

Despite Rifkin being an in-demand session musician, Podrasky said, “You know what? He answered my call. I hadn’t spoken with him for five years. He immediately was on board and did a remarkable job. He made the three songs that he played on soar. I’m so happy that he was like the fifth Rave-Up.”

In what would have been a shrewd bit of serendipity, The Rave-Ups almost recorded a cover of “Pretty in Pink” for the new album, but since “the pandemic was raging, we never got in a room together to do it.”

To complete the album process, the band hosted a crowdfunding campaign online. Podrasky said he hated to ask for money, but was thankful to all the fans and friends that “stepped up to bat … I was humbled by the fundraiser because the record never would have gotten done without them.”

For more on the Rave-Ups, visit the band’s official Facebook page.