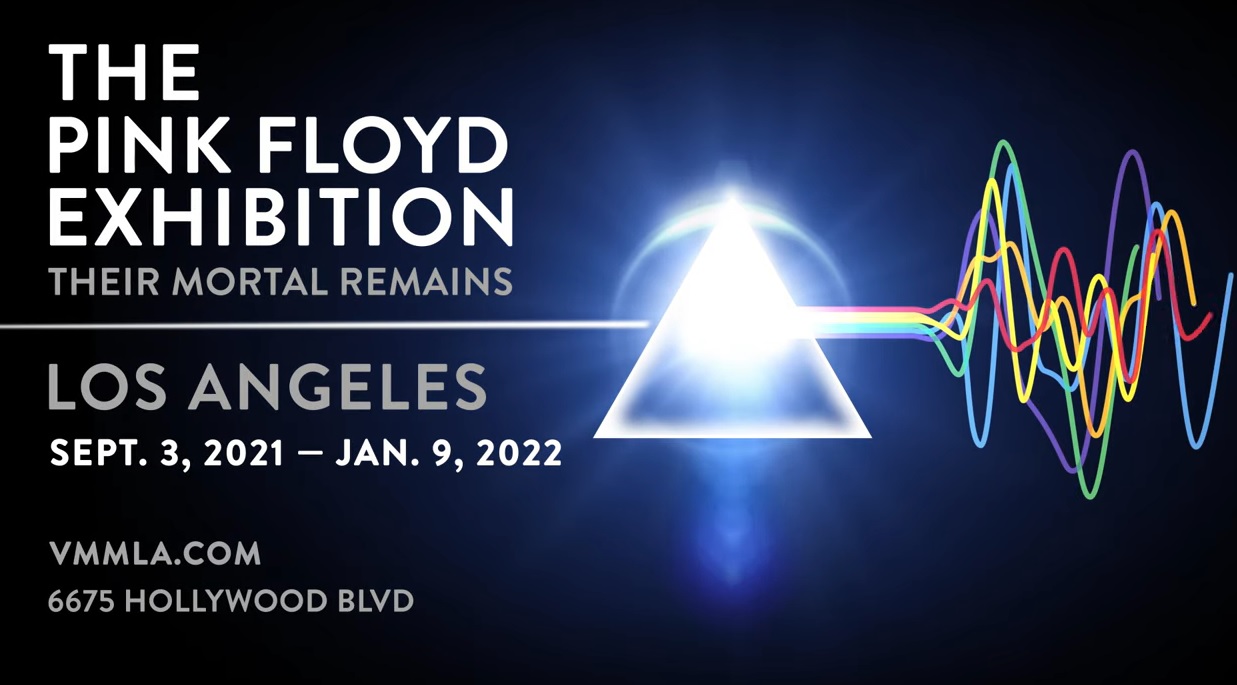 Due to global freight delays, The Pink Floyd Exhibition: Their Mortal Remains, originally scheduled to open at Vogue Multicultural Museum in Los Angeles on Aug. 3, will now open a month later, on Sept. 3, it was announced on Tuesday.

A touring museum exhibit exploring the unique path, career trajectory, and influence of the groundbreaking English group, the Los Angeles opening will mark the fifth different country to host the exhibit, which debuted at London’s Victoria and Albert Museum in 2017 to rapturous acclaim. Click here for further details.

1/3: Sadly, the opening of The Pink Floyd Exhibition: Their Mortal Remains at the Vogue Multicultural Museum in LA has been unavoidably delayed due to global freight issues. Due to open Aug 3rd, it now opens on Sept 3rd & runs until Jan 9th, 2022.
The many containers filled…

Some additional facts about the exhibit and how it came about:

As the first location outside of Europe, Los Angeles is the ideal destination to host the exhibition as the band has a rich history with the city, having rehearsed and performed there on many occasions. Pink Floyd’s The Wall was completed and mixed in the famous city and in 1980 the group performed the first of 31 live shows at Los Angeles Memorial Sports Arena.

The Pink Floyd Exhibition is a collaboration between the members of Pink Floyd and curator, Aubrey ‘Po’ Powell. Developed closely with Nick Mason (Exhibition Consultant for Pink Floyd), the exhibition features over 350 artifacts collected over the band’s extraordinary career. It is an audio-visual journey through more than five decades of one of the most iconic groups, and a rare glimpse into the world of Pink Floyd. The exhibition is a collaboration with designers Stufish, entertainment architects, and the band’s long-standing stage designers.

Existing ticket holders for August will be notified via email about how to reschedule their dates at no additional cost. Ticket holders may contact the Vogue Multicultural Museum at info@vmmla.com with questions about the ticket exchange process.

The Exhibition teams would like to thank everyone for their patience and understanding.

Tickets for the Exhibition are on sale via www.vmmla.com. The Pink Floyd Exhibition is promoted by Michael Cohl of S2BN Entertainment, in association with LA event promoter Diego Gonzalez.

And per a news release:

Each chapter of the Pink Floyd story is represented, with objects and artifacts displayed, many unseen before the exhibition. There are handwritten lyrics, musical instruments, letters, original artwork, and many of the stage props. Some of these items have long been held in storage facilities, film studios, and in the personal collections of band members before being ‘dusted off’ for the exhibition.

From the entry point into The Pink Floyd Exhibition, the visitor is immersed in Pink Floyd’s world. They will find themselves transported to the band’s beginnings in 1967 on the underground scene in 1960’s London including pictorial examples of the atmospheric oil and light projections as well as the equipment used by Pink Floyd’s 1960s-era lighting designer, Peter Wynne Willson. You will be assailed by a chronological trip through Pink Floyd’s history, connecting with music, art and design, sound technology and live performance via landmark albums such as The Dark Side Of The Moon, Wish You Were Here, Animals, The Wall, and The Division Bell.

Art and technology are celebrated, including an original painting by Syd Barrett, who studied art in London and Cambridge before becoming a full-time musician as well as a replica of the famed mirrored Fender guitar that Syd liked to play on stage and Syd’s sketch of how he envisaged the first Pink Floyd line up. Also featured is the Azimuth Co-Ordinator, the custom-built device used by Richard Wright to pan the group’s live sound, via a joystick, around any given venue. The Azimuth played an integral part in Pink Floyd’s theatrical live performances at venues such as London’s Royal Festival Hall and Royal Albert Hall in the late 1960s as well as on the recording of the clock montage for ‘Time’ on The Dark Side of the Moon.