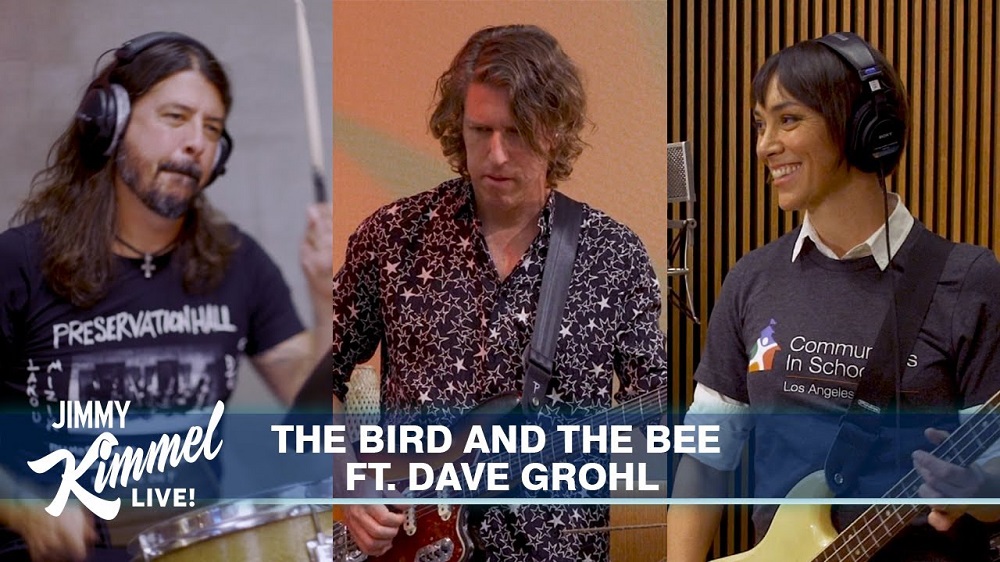 In late October, the Bird and The Bee — the project between seven-time Grammy-winning producer/songwriter Greg Kurstin and songwriter Inara George — released Put Up the Lights, a holiday album blending classics and original compositions.

One of the classics, “Little Drummer Boy,” features pal Dave Grohl on drums (this was before Grohl & Kurstin collaborated on their now-finished The Hanukkah Sessions series of covers), and the trio appeared on Jimmy Kimmel Live Thursday night for a fun rendition of the song:

One of the album’s original compositions is “You and I at Christmastime,” which Kurstin was especially excited to put out to the world:

“I’m so happy it’s finally here,” he said in a statement. We included some of our favorite holiday songs and wrote a couple of originals too. One of my favorite songs we wrote is ‘You and I at Christmas Time’ which was written through email. I sent Inara the piano part and I was blown away by what she sang over it.”

There was also a bit of 2020-mandated surrealism behind this project, which initially came about after the Bird and the Bee released Interpreting the Masters Volume 2: A Tribute to Van Halen in 2019. Unable to record together in a studio like normal, Kurstin and George had to adapt — and, in pandemic circumstances, that meant Kurstin recording at his home studio and sending tracks to George, who “moved her recording operation into a closet.”

“Working on a holiday record during summer is always strange, no matter what the circumstance,” said George. “But working on a holiday album during the summer, and a global pandemic, worldwide civil rights protesting, historical wildfires and the lead up to the most important election of our lives is really, really strange. Although, I have to admit, it felt like such a sweet little momentary escape singing “Chestnuts Roasting on an open fire…” all alone in my closet. It was a little respite from reality.”

The result is an airy and slightly quirky holiday-themed album made under the weirdest of circumstances. Listen below, via Spotify: