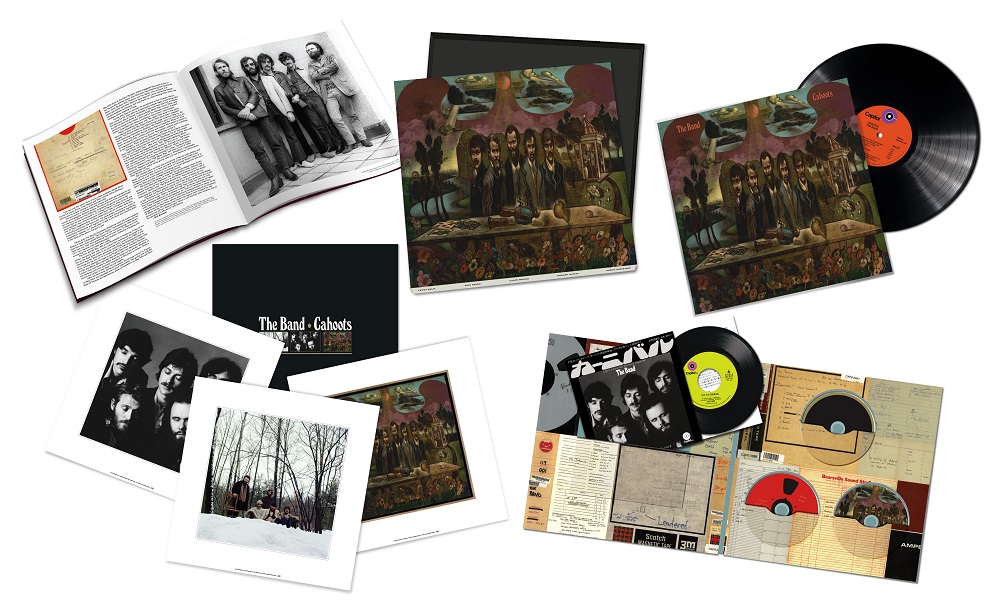 Originally released in 1971 as fourth studio album from The Band in four years, Cahoots came with anticipation — and on Dec. 10 the album will be revisited to commemorate its 50th anniversary.

Announced on Friday, the new Super Deluxe edition will be made available in a variety of formats and featuring a treasure trove of additional material, some previously unreleased. Per a news release, among the varieties will be a multi-format Super Deluxe 2CD/Blu-ray/1LP/7-inch vinyl box set along with digital, 2CD, 180-gram half-speed-mastered black vinyl and limited-edition 180-gram black vinyl packages. All the Anniversary Edition releases were overseen by principal songwriter Robbie Robertson and sport a new stereo mix by Bob Clearmountain from the original multi-track masters. The box set, CD and digital configurations boast a bevy of unreleased recordings, including Live at the Olympia Theatre, Paris, May 1971, a rousing bootleg partial concert consisting of 11 tracks culled from the initial throes of a European tour that found The Band perched at the top of their live game; and early and alternate versions of “Endless Highway” and “When I Paint My Masterpiece” along with six other early takes, outtakes, instrumentals, and stripped-down mixes.

Exclusively for this box set, Clearmountain has also created new Dolby Atmos and 5.1 surround-sound mixes of both the album and four bonus tracks, presented in high resolution on Blu-ray, alongside the new stereo mix. Every new audio mix has been mastered by Adam Ayan at Gateway Mastering. The lift-top box set also includes an exclusive reproduction of the Japanese pressing of The Band’s 1971 7-inch vinyl single for “Life Is A Carnival” b/w “The Moon Struck One” in their new stereo mixes; a 20-page booklet with new notes by Robbie Robertson and extensive insider liner notes by Rob Bowman; three classic photo lithographs, one each by Barry Feinstein, Richard Avedon (his infamous eyes-closed group portrait from the back cover) and noted New York artist/illustrator Gilbert Stone (who painted the still stunning stretched-out portrait of The Band on the album’s front cover); plus a wealth of additional material and other historical data from the original recordings sessions. The limited-edition 180-gram black vinyl release that features a tip-on jacket also contains a photo lithograph by Barrie Wentzell that’s unique to the package.

Along the lines with previous archival releases championing The Band’s rich history, the Cahoots reissue was put together with significant input from guitarist/songwriter Robbie Robertson. More details on that aspect:

As with the acclaimed 50th anniversary collections for the winning trio of Music From Big Pink, the self-titled record and Stage Fright, Clearmountain and Robertson’s approach to remixing Cahoots was undertaken with the utmost care and respect for the music and what The Band represents. That said, Robertson’s instructions for how his right-hand mixing partner should handle the Cahoots mixes possessed one key difference: Robertson wanted Clearmountain to transform them based on what he felt was lacking from the original mixes. As Clearmountain shares in the liners, “Robbie told me, ‘Just think of the original mixes as rough mixes. Pretty much don’t pay attention to the mixes themselves.’” This directive gave Clearmountain the leeway to unclutter some of the album’s original arrangements, all with Robertson’s blessing: “In the beginning of these sessions, we didn’t know if we were making another Basement Tapes where nobody would hear the music or if we were actually making a real record,” Robertson admits. Though Robertson felt the first three Band records wound up sounding better due to a combination of how today’s technology actually enhances the limitations of yesterday’s technology, he doubled down with his instructions to Clearmountain for Cahoots: “I told Bob, ‘There are no rules. So, every mix we do, I want to start from scratch. I don’t even want to listen to the original. I want to listen to the way we hear it now and be fearless and experimental with it.”

Clearly, Clearmountain took Robertson’s wishes to heart not only in terms of his 2021 stereo mix – as is instantly evident in the greater clarity of the punch of the drums and bass and how putting guitar and organ lines a bit back in the mix enables certain vocal elements to be more out front – but most especially in terms of the breadth so readily apparent in his groundbreaking Dolby Atmos mix, a first for The Band’s core catalog. In his Atmos mix of Cahoots, Clearmountain puts the listener dead-center and smack dab in the middle of the band in the most “you-are-there” fashion imaginable. Concludes Robertson, “This is what I really meant. This is the honesty of this now. This is a trip. This is something special.”

Stay tuned for pre-order links from our Rock Cellar Store.

Here’s the track listing for the Cahoots 50th Anniversary edition:

6. Shoot Out In Chinatown

7. The Moon Struck One

13. When I Paint My Masterpiece

Live at The Olympia Theatre, Paris, May 1971 (Bootleg, Partial Concert)*

3. Loving You Is Sweeter Than Ever

4. The Night They Drove Old Dixie Down

5. Across The Great Divide

12. Life Is A Carnival (Instrumental)*

6. Shoot Out In Chinatown

7. The Moon Struck One

13. When I Paint My Masterpiece

1. Shoot Out In Chinatown

2. The Moon Struck One

A. Life Is A Carnival

B. The Moon Struck One