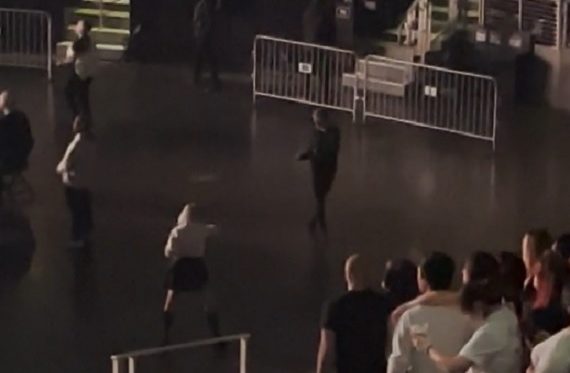 There’s something about the music and overall vibe of The 1975 that elicits strong emotional reactions from the band’s fans.

Not only does front man/band leader Matty Healy command attention with his irreverent quotes and overall demeanor — arguably the most compelling aspect of the English pop-rock/indie band‘s career — but the whole aesthetic of his group’s music translates even better to the live stage.

Out on a North American tour right now in support of their latest album, Being Funny in a Foreign Language, The 1975 stopped through Atlanta this past weekend. As captured by a fan on the band’s Reddit channel, two concertgoers in particular have just the best time during “It’s Not Living (If It’s Not With You),” a particularly euphoric, synth-pop anthem from the band.

Just watch and observe these two having the time of their lives out there behind the general admission area:

This, truly, is what it’s all about. Just dancing like nobody’s watching, getting completely lost in the moment. It’s aces.

There’s still about another month’s worth of shows on this tour, which presented  a chance for the group to make up for lost time, as its planned 2020 tour was cancelled due to the pandemic.

If any of the remaining dates are in your area, you still have time to grab tickets and put on your own dancing clinic: