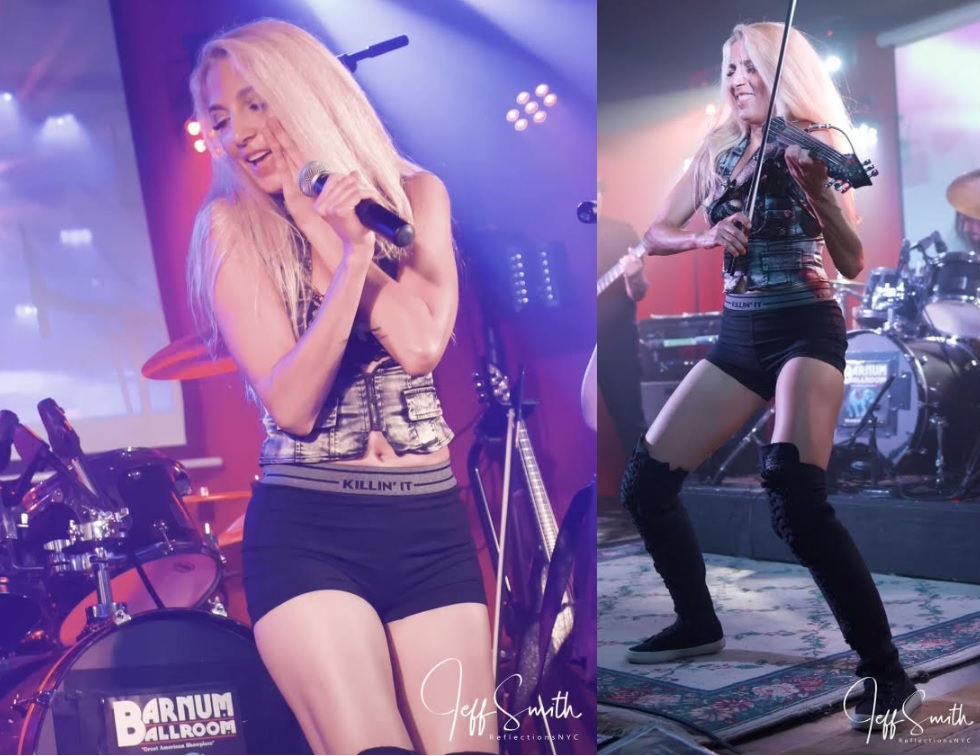 The electric violin is no longer an oddity in rock. Pioneers such as Mark Wood have captured its energy and spirit for years. New York-based electric violinist/singer Susan Aquila, though, has amped it up to Mach 5 with her new self-titled album. She’s taking the rock world by storm, stepping out from her “sideman” role and into the spotlight.

Aquila has performed and recorded with such rock icons as Paul McCartney, Elton John, and Billy Joel. On her new album, she’s backed up by such hard rock luminaries as Billy Sheehan and Rod Morgenstein, with many of the songs co-written by Aquila and her guitarist, Joey Jem.

The songs display a wide range of styles, ranging from the hard-rock stomper “Things You Make Me Do” to the girl group sound of “No, I’m Not That Kinda Girl.” Another standout cut on the album is a version of the classically tinged “Flight of the Wounded Bumblebee” by Nuno Bettencourt.

Aquila’s violin playing is like a raging wind. She plays with abandon and fire, shifting from rock to classical with ease and panache. Gyrating everywhere, she’s a whirling dervish of energy with an irrepressible personality.

These elements are evident throughout her music videos, as well as her high-octane stage performances, replete with dazzling violin pyrotechnics.

Her outfits, including hot pants and a full leather ensemble, add to her flamboyant stage presence.  Her voice has considerable texture and grit, reminiscent of Joan Jett and Pat Benatar at times.

Get to know her better with a new Q&A below.

Susan Aquila: A lot more opportunities are opening up for electric violinists in rock, and the electric violin has become a more mainstream rock instrument.  The electric violin allows you to use more effects, such as guitar effects.  It adds more coloring and dimension to rock music, and affords a hard-edged sound.

Rock Cellar: The new album seems to take you in new directions. Do you feel the album showcases your talents better?

Susan Aquila: Absolutely. It’s stronger in terms of the material, the lyrics, and my singing. Typically, it’s hard to work in violins in these kinds of songs. But I was able to do violin solos on a few tracks. I think the album gave me a good opportunity to express myself vocally and on the violin.

Rock Cellar:  The song “No, I’m Not that Kinda Girl” seems fairly different in style from your other songs with its girl group vibe.  What sparked that song?

Susan Aquila: Joey (Jem) actually wrote the song for another project.  Then he played it for me, and I really wanted to do it.  He said “you can sing it.”  We recorded it and worked on the lyrics together.

Joey Jem: We wanted to try doing a Beatleque song when we came up with the song.  Susan nailed it.

Rock Cellar: Your version of The Who’s “I Can’t Explain” is very different and intriguing. Why did you decide to cover the song on your new album?

Susan Aquila: I wanted to do a real girlie take on the song with a 60’s sound.  We wanted to refresh the song and make it fun.

Joey Jem: Actually, the Scorpions did a cover of the song, which caught my attention, as I’m a big Scorpions fan.  We added a verse at the end of the song.  It was a great collaboration, and a great thing to cover.

Rock Cellar:  You seem to have a real passion for hard rock music. How did that develop?

Susan Aquila: I grew up in Smithtown, Long Island, with hard rock all around me. After studying violin, I’d come home, and all I’d hear was rock. I love them both equally, though my heart was really into rock.

Rock Cellar: Who were your main musical influences?

Susan Aquila: Jimi Hendrix was a main influence, for sure. He had a strong work ethic and delivered strong performances. He was able to think outside the box, and had new ways to express himself. I really loved Janis Joplin.  Her voice conveyed raw emotion. It wasn’t pretty, but you knew how she felt when she was singing.

Rock Cellar: How do you manage the challenge of bridging the worlds of rock and classical music?

Susan Aquila: When I first started playing rock music and coming from the classical world, it wasn’t easy for me to improvise, as I wasn’t accustomed to it. But I persevered with improvisation, and it became natural. Now, I’d rather improvise than feel limited playing in an orchestra setting.

In order to prepare myself for playing now, I do a lot of “maintenance” playing. For example, I typically start with a classical routine, than a blues routine, and finally a rock routine. That way, I keep them all of them in sync.

Rock Cellar: How did your experience in theater shape your concert performances?

Susan Aquila: When you play in the pit at theaters, you get an opportunity to watch a lot of shows and gain a better understanding of production values. You learn a lot about showmanship. You find out what works and what doesn’t.  You learn what excites crowds.

Rock Cellar: I understand you’ve been playing some guitar recently.  How does your experience with the electric violin influence your guitar playing?

Susan Aquila: Guitar is a new thing for me. I’m still learning how to play, and hope to incorporate it in the next few shows. It’s difficult to accompany yourself on violin, so it will be easier to accompany myself on guitar once I’m more proficient.

I also play keyboards, and plan to add that as well in new shows.