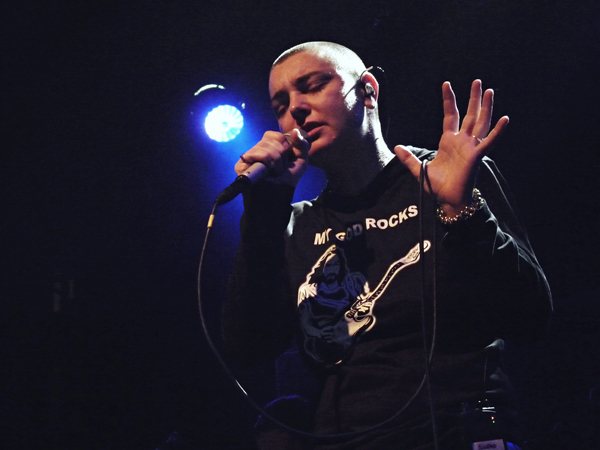 SINÉAD O’CONNOR at the El Rey Theatre – February 21, 2012
There’s a certain type of performer with a spark or fire that commands a room even in their silence.  It’s something beyond talent or skill, perhaps better classified as electro-magnetic. Maybe this is obvious, but Sinéad O’Connor has it in spades.
Whatever this intangible energy is, it must at least partially account for her ability to walk onto a stage in front of 1,000 people, sing a new song very few had ever heard, and reduce every last of them one to a state of immediate awe. The remaining probability is down to the fact that her voice is one of the most spectacularly powerful ever encountered.
Her phenomenal, understated 6-piece band (including the legendary Robbie McIntosh) produced a haunting undercurrent before the barefooted songstress ran onstage.

“You’re running out of battery,” she pleaded, with a purity of emotion channeled as though her life depends on it.

It took a few songs before she glanced up and offered a wide-eyed smile, openly displaying her charm and vulnerability. 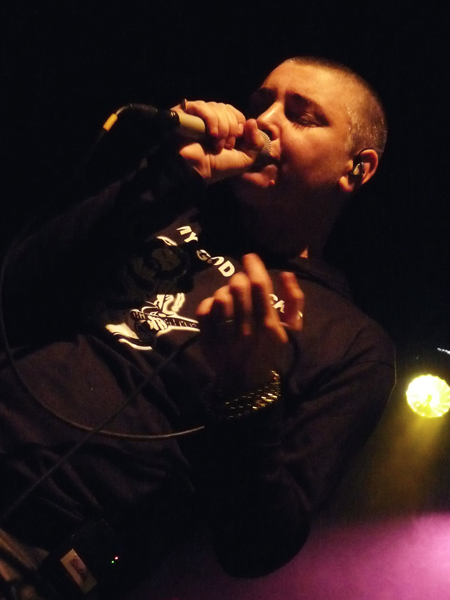 She joked that she was holding back from speaking between tunes lest she say anything inappropriate. (A reference to the needless fuss caused by the media over her recent Twitter activity.) Before long this pretense was dropped and she was instructing the front row to remind her in no uncertain terms when she – because of her shyness – backed off too far from the microphone to be heard.
New songs were woven in seamlessly with old. Sinéad expressed her pride and excitement over How About I Be Me (And You Be You)?, released that day, receiving in return shouts of love and affirmation. Never has the artist been anything been unapologetically herself – in humor and coyness, in fury and boldness – and the beauty in this is the respect garnered and the strength adopted by her fans.
They sang along enthusiastically to Emperor’s New Clothes and The Last Day of Our Acquaintance, danced to The Lamb’s Book of Life, reacted to amusing lyrics, cheered when she grinned. What stopped the room’s collective breathing altogether was the ancient-spirit-conjuring a cappella version of I Am Stretched on Your Grave, the soul of Ireland so very alive within her keening.
The encore included a scalding V.I.P. and her debut album’s Jackie, delivered with a blinding force only possible live.
When it comes to art so unadulterated and a presence so unquestionable, forget the controversy and just listen. The rest is useless.
setlist:
Take Off Your Shoes
I Had a Baby
Emperor’s New Clothes
Never Get Old
No Man’s Woman
Jealous
The Wolf is Getting Married
Old Lady
Reason with Me
I Am Stretched on Your Grave
Three Babies
4th and Vine
The Lamb’s Book of Life
Nothing Compares 2 U
The Last Day of Our Acquaintance
++
V.I.P.
Jackie
Queen of Denmark
Before We End Our Day

Opening act was Rocco DeLuca, whose mournful wails and well-worn resonator guitar hushed the crowd. Sealing the deal on the extraordinary night was a special appearance by surprise guest Daniel Lanois, joining him on pedal steel.
concert reviewdaniel lanoisel reyEl Rey theatreElizabeth Gipsonfeb 21 2012How About I Be Me and You Be YouLos Angelesrobbie mcintoshrocco delucaSinead OConnor