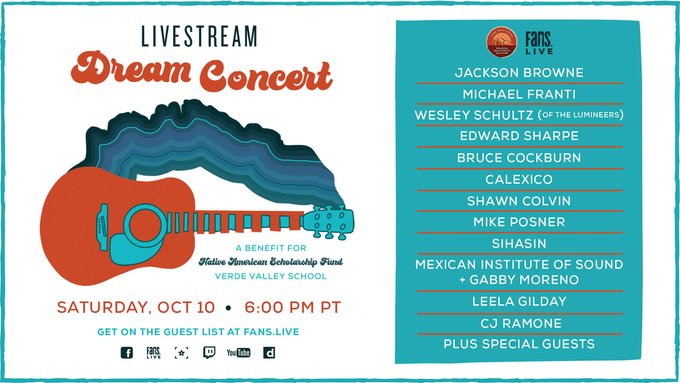 The show will begin at 9 p.m. ET/6 p.m. PT on Saturday, Oct. 10, and you can receive information about how to access the show by clicking here.

Some additional details, per FANS.live (a co-sponsor of the event):

The concept of Dream Concert originated over 30 years ago by Jackson Browne, where he held an outdoor music festival on the Verde Valley School campus. The festival then became an annual affair, which raised tuition assistance for the Native American students. Past performers include Neil Young, John Trudell, Bonnie Raitt, Indigo Girls, Crosby, Stills, Nash and Young, Ben Harper, and many more.

This year’s lineup includes heartfelt performances by Jackson Browne, Shawn Colvin, and Bruce Cockburn, along with Arizona bands Sihasin and Calexico. The livestream will also feature appearances by Michael Franti, Wesley Schultz of The Lumineers, Edward Sharpe, Dene-Canadian rocker Leela Gilday, and more to be announced.

In keeping with its roots, the Dream concert will raise tuition funds to support the Verde Valley School’s Native American Scholarship Fund and their student’s quest for quality education. The Verde Valley School is a top tier high school devoted to cultural exchange, hosting over 130 students from around the world to live and learn together.

“The nation, indeed the world, needs a school that will bring together children from many nations, many cultures, all races and religions, not simply to study and tolerate on another, but to learn from and celebrate their differences.” – Hamilton Warren, Verde Valley School Founder