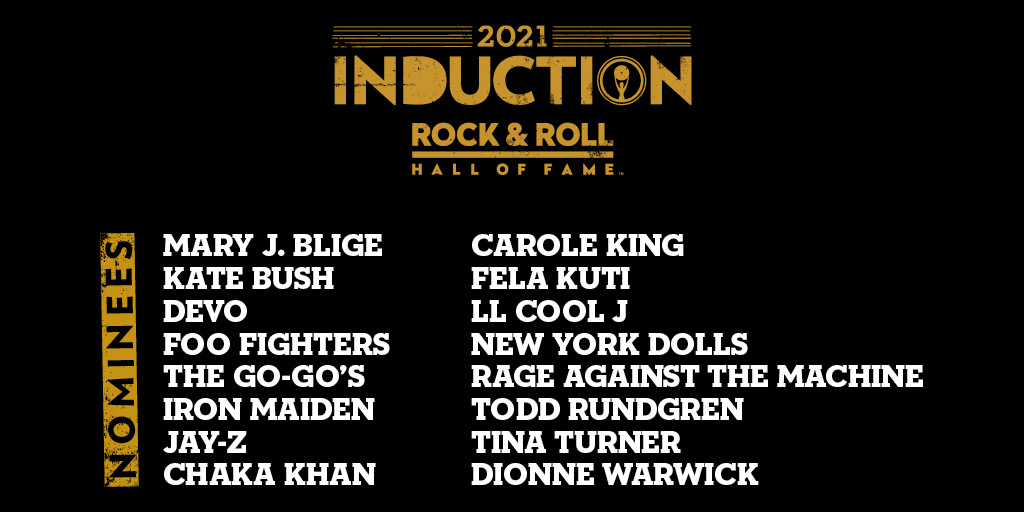 The Rock and Roll Hall of Fame announced its official nominees list for the Class of 2021 on Wednesday, and it’s another eclectic mix of acts spanning decades, genres and styles.

Congratulations to the #RockHall2021 Nominees! Read more about this list and the 2021 Induction at https://t.co/iL9HlcGbDd pic.twitter.com/HWaQzuPsS3

To be eligible for nomination, an individual artist or band must have released its first commercial recording at least 25 years prior to the year of nomination. Seven out of 16 of the Nominees are on the ballot for the first time, including Foo Fighters, The Go-Go’s, Iron Maiden, JAY-Z, Mary J. Blige, Fela Kuti, and Dionne Warwick. Chaka Khan was previously nominated both solo and with the band Rufus. If elected, Carole King and Tina Turner will become the second and third female artists inducted twice, following Stevie Nicks’ 2019 election. If Foo Fighters are inducted, Dave Grohl will also become a twice-inducted performer.

2020, of course, saw the Rock and Roll Hall of Fame alter its plans for an in-person induction ceremony and celebration due to the COVID-19 pandemic, ultimately putting together a “virtual” event. The 2021 Induction Ceremony, at least as of right now, is tentatively planned for the Fall, and the Hall hopes to have attendees in person at the Hall of Fame in Cleveland.

The 16 acts nominated for 2021 inclusion in the hallowed halls of the Hall of Fame are now up for the Van Vote, which will factor in the decision-making process:

The Rock & Roll Hall of Fame offers fans the opportunity to participate in the Induction selection process with the Fan Vote. Today through April 30, fans can vote every day at rockhall.com, or at the Museum in Cleveland. The top five artists, as selected by the public, will comprise a “fans’ ballot” that will be tallied along with the other ballots to select the 2021 Inductees.

am also thrilled to be included with so much talent. great batch of nominees. hard to believe New York Dolls and Todd Rundgren weren't inducted yet. and @DEVO will def be getting one of my votes.

Well – I’m THRILLED to say this: We @officialgogos are among the 2021 @rockhall nominees! We love YOU fans and now you get to help us reach the top 5 of the official Fan’s Ballot. Select up to 5 Nominees daily and submit your vote. Spread the word and vote now until April 30! 🤘🏾 https://t.co/Q4CRHLouzP