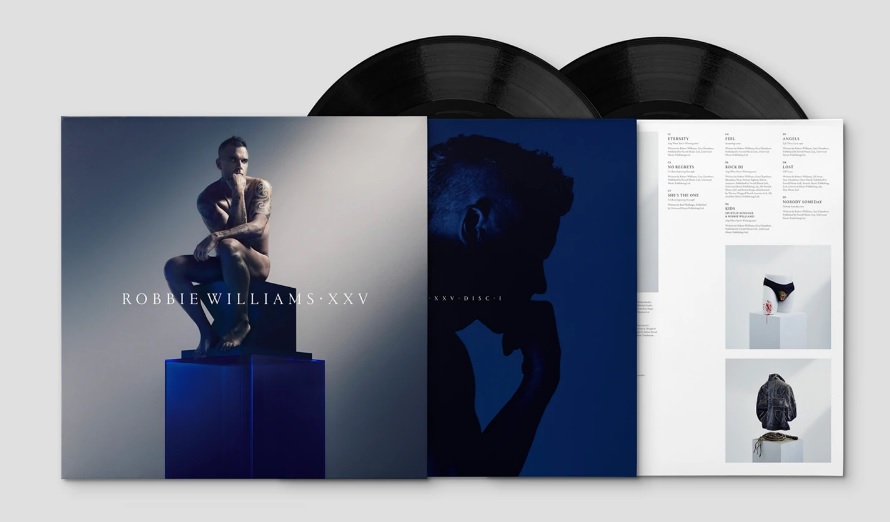 On Friday, Williams previewed the album, largely orchestral rearrangements of some of his biggest hits of the past two-plus decades of his catalog, with a pair of tracks. The “Eternity/The Road to Mandalay” double A-side single was a huge release in England and Europe in 2001, revisited here for XXV.

Here’s “Eternity,” originally a non-album track that Williams paired with the Sing When You’re Winning single “The Road to Mandalay”:

That second track was also shared in its new form to preview XXV:

Previously, Williams introduced the XXV era with a revamped version of “Angels,” his massive ’90s hit that is more or less his best-known song in the United States:

XXV features many of Williams’ biggest hits, the tracks that have made him a household name across countries throughout the world. The material was newly orchestrated by Jules Buckley, Guy Chambers and Steve Sidwell, and re-recorded with the acclaimed Metropole Orkest for this XXV collection.

XXV also includes “Lost,” a new, original track that will be released as a single from the set, while the Deluxe Edition features three additional new songs.

“I’m so excited to announce my new album ‘XXV’ which celebrates many of my favourite songs from the past 25 years,” said Williams. “Each track has a special place in my heart so it was a real thrill to record them again with the Metropole Orkest. Can’t wait for you all to hear it.”

Live review: By the time @RobbieWilliams' #LiveInLasVegas residency at @WynnLasVegas is over, he ought to finally have an American audience of his own. #RobbieVegas #RobbieWilliams https://t.co/Xg0OtaSUEP

It remains to be seen if Williams will re-engage with the Las Vegas residency he delivered in early 2019. Without much of a sizable American audience over the years compared to other countries around the world, he’s largely stayed away from the country as far as live performances are concerned. However, these Vegas shows were a triumph, a perfect pairing of vibe and atmosphere to match Williams’ dynamic stage presence (and at a venue much more intimate than he’s used to playing, making it a special treat for those in attendance).

The first batch of Vegas shows went off to great fanfare and sold-out audiences, with a second leg announced for early 2020 … only to have the COVID-19 pandemic upend those plans. Since those shows were scrapped, there has been no mention of any makeup shows or another Vegas run, but here’s hoping that does happen in the future.