Home / It Looks Like Ringo Starr, Joe Walsh and Their Wives Enjoyed the Rams’ Win in Super Bowl LVI

It Looks Like Ringo Starr, Joe Walsh and Their Wives Enjoyed the Rams’ Win in Super Bowl LVI 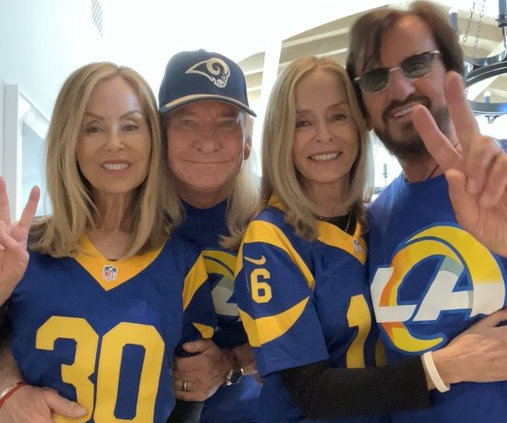 The stars came out on Sunday for Super Bowl LVI at Los Angeles SoFi Stadium, the gorgeous new NFL stadium that plays home to both the Los Angeles Chargers and the Los Angeles Rams. It was the hometown Rams that came away with the hard-fought victory to give the franchise its second Super Bowl victory, the first coming in 1999.

Throughout the evening, those lucky enough to be in attendance at the “Big Game” flooded social media with photos from the event, which transcends the sport of football as one of the premier events in all of the United States.

Afterwards, celebratory photos began popping up online, including this one depicting Joe Walsh of the Eagles and his wife, Marjorie, accompanied by Ringo Starr and his wife, Barbara (Marjorie’s sister), with Ringo’s customary “peace and love” social media signature:

In related news, Ringo recently unveiled plans for a new All-Starr Band tour, which will be the first in a few years as a result of the pandemic.

“I can’t wait to get back out on the road and play,” said Ringo Starr of the tour news. “This is the longest I’ve been off the road in years – up until 2020 I was touring every year with the All Starrs – and I’ve really missed it. Making music in the studio has been great, and it certainly saved me during the pandemic, but nothing beats playing live with great musicians in front of an audience. I love my fans and they love me and it’s going to be wonderful to be peace and loving and playing for them again.”

Joining Starr on the road will be a group of his best musical colleagues and friends, including All-Starr Band regulars Steve Lukather, Colin Hay, Warren Ham, Hamish Stuart and Greg Bissonette, with Edgar Winter returning to the band for this run.