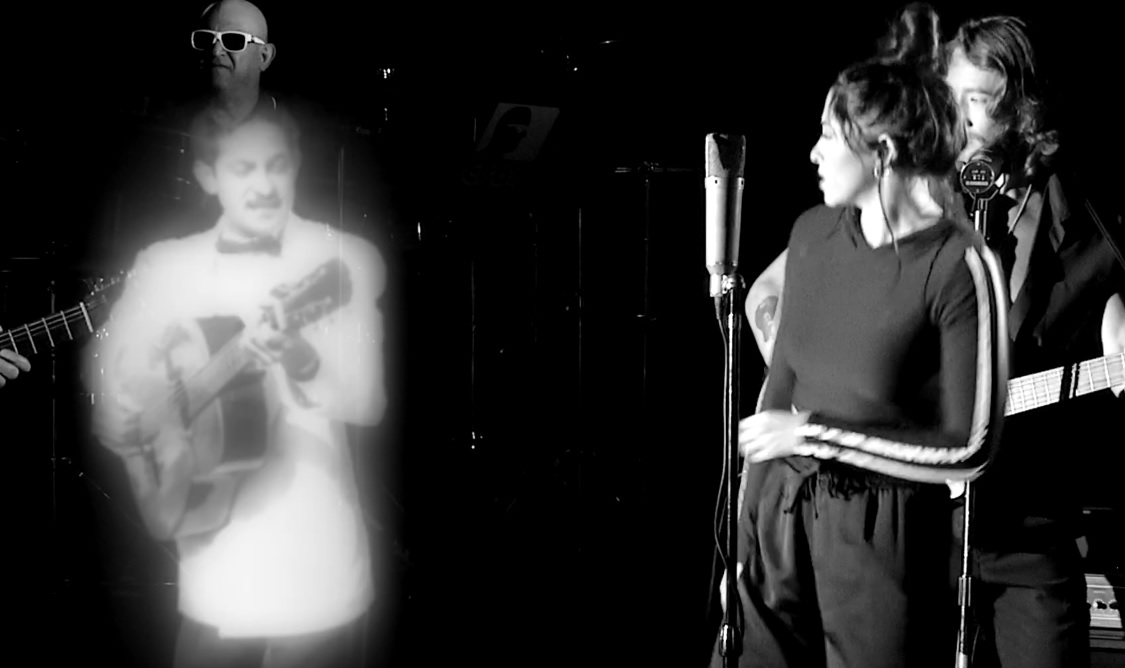 Rhythm Tribe is an Afro-Latin musical collective originally formed by guitarist and vocalist Thomas Guzman-Sanchez in 1989.

The band, which also featured Thomas’s wife Marla brother (Paul) and a family friend, Steve Mead, quickly made waves on the music scene, eventually signing a record deal with BMG and releasing a music video for “Gotta See Your Eyes,” which earned some buzz on MTV.

The project fizzled out a few years later due to the shifting musical landscape, but in 2022, Rhythm Tribe is back, and the group’s new video for “Todo Eso” is a marvel of technology and a wonderful moment for the family, in addition to being a hip-shaker of a tune.

Rafael, a Puerto Rican guitarist, died before Thomas’s children were born. But when Thomas discovered an unfinished 1957 recording of “Todo Eso – Por Medio Peso”, which Rafael and his wife, Connie Guzman-Sanchez, had been working on, it inspired him to put something special together. After years of working on it, “Todo Eso” materialized, and is featured on Rhythm Tribe’s new comeback record, the appropriately titled Generations.

More on the story:

The video features Rhythm Tribe, and through film magic Rafael is able to make a guest appearance from 1957 to jam with his son and grand kids, that sadly never got to meet him. Rafael passed in 1989, Mason was born in 1995 and Brisa in 1998. So this is a special example of this family through art. Even though Connie passed away in 2017, she got to hear the recording of TODO ESO before she died. Her reaction was complete tears of happiness. She said, “The only way you could not feel this is if you’re dead. “ She then finished by saying the she had always told her husband that they had something special. It’s amazing that it has taken a lifetime to bring this claim to fruition. Now that the recording and the video are done,it’s time to share this special creation with the world. Thomas says, “We hope you enjoys listening and watching this as much as we enjoyed making it.” The recording is a true celebration of the Puerto Rican rhythms and culture that makes up their family.

A bit more about the “Todo Eso” story and Rhythm Tribe in general, via Thomas Guzman-Sanchez himself:

Rock Cellar: Thomas, it had to feel quite special to have your father appear on-screen with your children. You used iZotope software to restore the unfinished recording parents had started in 1957. Talk about the work that went into restoring the old footage and then combining it with this new performance, were there any unexpected challenges along the way?

Thomas Guzman-Sanchez: In high school I discovered an old 75 rpm record disk that had a recording of my Dad, Rafael Guzman-Sanchez (born 1926 in Puerto Rico), singing and playing guitar with my mom Connie Guzman-Sanchez who was singing harmony and playing maracas. The song was “Todo Eso,” which was written in 1956. At the beginning of the recording my dad could be heard saying, “This is for Sputnik”. It turns out that Sputnik was the name for me in my mom’s stomach in November of 1957. So this is a recording of my dad singing to me in my mom’s stomach. I was amazed to discover this information. Since discovering it, I had always dreamt of finishing the recording some day.

The vinyl record was in very bad condition from the many years of getting scratched, it was very noisy with unclear audio. Years later, after working with a mastering engineer, we were able to properly transfer it into a digital format. In 2018, I used Izotope RX suite to clean it and EQ it, using the Spectral Denoiser and many other features. I was able to cut it to sync with a click track in Pro Tools. Unfortunately my father died in 1989 so I have not been able to jam with him for over 30 years. After I edited the song into a solid arrangement I spent all night playing with him, which was a dream come true. To hear him playing his Guaracha guitar rhythm was emotional. It was as if he was there with me again.

In 1993 I had stopped my recording career to become a father. It wasn’t until 2018 when I asked my son, Mason (born 1995) and my daughter, Brisa (born 1998) if they wanted to make music together. They said yes, and together with our good friend Esau Garcia (Hybrid Drums) started rehearsing with the idea to add the band to the recording. This is why we named our first album, Generations.

We began to work on an arrangement for “Todo Eso.” The most amazing thing was when we were in the studio at NRG in North Hollywood. That was when the group heard my dad and mom for the first time. That was a very emotional moment, because they never got to meet their grandfather. That day we tracked the song live to my dad’s recording. It was as if he was there with us, as the kids sang lead with him and three generations of guitar players played together.

The next day I played it for my mom, who was still alive. As the music started the tears began to well up in her eyes. She began to heavily sob as she kept saying, “I knew we had something special, I knew it.” Overwhelmed with hearing my dad’s voice and guitar for the first time in 30 years was too much for her, as she could not stop crying. Sadly, my mom died later that year, but she got to enjoy this music before passing. In 2021 we were able to enter this film short that we produced into the Tribeca Film Festival. Just to be accepted to compete was the win for us.

We released “Todo Eso” on our first album, Generations.

Rock Cellar: Brisa and Mason, along those same lines, what does it mean to you to have such a special performance released to the world?

Mason Guzman-Sanchez: It feels absolutely amazing. I can happily, and honestly, say that I have a song that I recorded with my dad and grandfather. I can still remember the big smiles on everyone’s face as we recorded this song. It was a really special moment and I’m glad people get to hear that final mix.

Brisa Guzman-Sanchez: It was definitely a cool experience, sort of traveling through time to remake this song with the whole family on vocals. Just realizing that my dad was in my abuela’s stomach when this recording first took place and us being in our early twenties now, it is as if we are all around the same age in this recording … except for my dad, obviously. It brings a sense of warmth to the room when I hear this song, and the performance was just making that warm amazing feeling a visual experience. For that, I cannot be more happy.

Rhythm Tribe is now premiering a new video for their latest release “Moving On” which you can view below:

The song is featured on the newest Rhythm Tribe album, Next Level, and is currently among the top most-added tracks on Billboard.

Rock Cellar: With all of this activity and the important stories behind it, what’s next for Rhythm Tribe?

Thomas Guzman-Sanchez: Sharing a creation of my father performing with his grandchildren, who he never got to meet, and to have him from 1957 performing with us on stage was completely fantastic. Mason and I have continued the Guaracha guitar rhythm that he created and applied to our new music. Every time we play that rhythm, it’s like my father is there. We have become aware that we are continuing the Guzman-Sanchez family musical legacy of over 100 years. More important is the love we have for one another, creating and playing music together.

The group looks forward to performing this music live on stage. We recognize that it is a real challenge to be an indie record company, VRL Music, and distribution company, DanceMaster.com. Those who have purchased the album means so much to us because they all are supporting the group directly.

We call our Latin fusion music “Acid Latin,” and will continue to perpetuate our musical vision and share it with the world.