One of the most powerful attributes of music is its ability to bring together people of all demographics, backgrounds and ideologies. Over the course of the past few decades, few musical acts if any have experienced the benefits of this more than Rock & Roll Hall of Famers the Red Hot Chili Peppers, and the impact of the group’s career was on full display this past Saturday, Aug. 6, at a sold-out Allegiant Stadium in Las Vegas.

The latest stop on the Chili Peppers’ Unlimited Love global stadium tour, a jaunt celebrating the band’s latest album, Unlimited Love, which the marked heralded return of longtime guitarist John Frusciante, the show was exactly that: a celebration.

Walking around the massive concourse of the gorgeous new facility that houses the NFL’s Las Vegas Raiders, every other person seemed to be wearing a Red Hot Chili Peppers shirt of some kind — whether a classic tee from the band’s ’90s heyday, a more recent tour shirt from the era that saw Josh Klinghoffer sub in for Frusciante, a new tour shirt picked up at one of the (many) merchandise booths or even custom apparel, sported equally by the 40+ crowd as well as multi-generational families of children, parents and grandparents all enjoying the shared experience together.

The music of the Red Hot Chili Peppers is as ubiquitous as any band in rock music history. Whether you consider yourself a fan or not, you’re no doubt familiar with at least a handful of their many hits. They’ve been truly inescapable over the years, the prevalence of songs like “Scar Tissue,” “Californication,” “Under the Bridge,” “Dani California” and many more effectively powering the very existence of FM rock radio for years.

This omnipresence has only worked in the band’s favor, of course, leading to this massively anticipated tour, which marked Frusciante’s delayed return after a gap that began in 2009 following the Stadium Arcadium era. With all due respect to Klinghoffer, himself a massively talented, multi-instrumentalist who has since joined Pearl Jam’s live band, Frusciante’s renewed participation adds a vitality and volatility to the Chili Peppers’ stage show that made this Las Vegas gig an unforgettable experience.

As the Unlimited Love tour has rolled on, first overseas in Europe before a North American run that began a few weeks back, the Chili Peppers have been joined by a variety of different support and opening acts. Las Vegas saw King Princess kick things off promptly at 6:30 p.m., and while the (probably still pregaming) Las Vegas audience was slowly filing into the stadium, the project helmed by Mikaela Straus delivered a rousing performance that surely won over some new fans.

“This is like the craziest childhood dream ever, opening for the Chili Peppers. Whoa,” exclaimed Straus, who supported her new album, Hold On Baby, with songs like “Let Us Die” (which featured late Foo Fighters drummer Taylor Hawkins as a special guest), her breakthrough 2018 single “1950” and more.

Guys I just had so much fun opening for the chili peppers. also I won 10 dollars at casino

The performance earned a shout-out from Chili Peppers bassist Flea later in the night that, “King Princess is music made for a fucking stadium,” and it’d be hard to argue with such a declaration.

Direct support for the Chilis came from none other than The Strokes, playing the second of a few such gigs following last week’s show in Seattle. The NYC indie-rock icons‘ 10-song set included several hits like “Last Nite,” “Hard to Explain,” “Someday,” “Juicebox,” “Bad Decisions” and “Reptilia,” a flashy light show accentuating the precise musicianship of the band, fronted as always by the entertaining Julian Casablancas.

The vocalist chatted between songs, making jokes about his gambling addiction, saying that, “It feels like we’re at the Super Bowl,” cracking a line about assimilating Anthony Kiedis’ vocal stylings into his own songs as a result of these gigs, and more. The Strokes have always tended to exhibit a fuller, louder and heavier live sound than their studio albums, and that was very much the case here, a full showcase of what has allowed the group to remain a can’t-miss live act dating back to their 2001 breakthrough, Is This It?.

Adding them to the mix as guests on the Unlimited Love tour was a bonus that the crowd seemed to really enjoy. 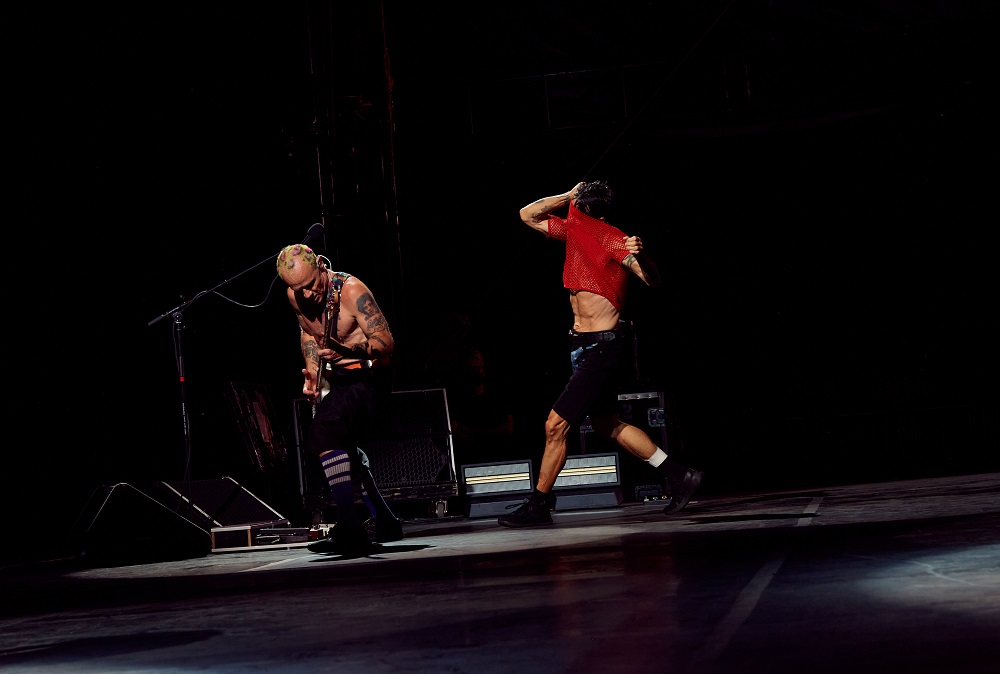 Around 8:45, the lights dimmed and it was time for the main event. At this point, nearly every seat in Allegiant Stadium seemed filled with fans ready to explode and let loose. An electrifying introductory jam session from Frusciante, Flea and drummer Chad Smith warmed things up until the opening guitar riff of “Can’t Stop” filled the stadium with energy, Kiedis bounding onto the stage like a man decades younger than his 59 years.

Some of these were with purpose — during “Charlie,” a visibly frustrated Frusciante experienced technical issues with his guitar equipment that limited his instrument’s effect and required some time-filling before the next song, “Snow (Hey Oh)” — but most of the jams exemplified the easy chemistry and familiarity the musicians have as a collective unit. The free-spirited nature of their performance, as well as banter from Flea and Kiedis (again, some of it with purpose as a stalling tactic for various equipment changes and minor delays) made a seriously huge football stadium feel as intimate as a tiny club, which is no easy feat.

But what truly made the show a spectacle is the Chili Peppers’ unpredictability. Out on a big world tour, the band could very easily stick to a static set list of hits and classic tracks, but this has proven to be a tour well-suited for both casual fans and those who’ve stuck with the group for the long haul.

Many of the hits were represented, of course, despite the absence of “Scar Tissue” and “Under the Bridge,” but some other selections no doubt surprised and excited many — like “Blood Sugar Sex Magik,” the title track of the band’s 1991 smash-hit album that made its tour debut in Las Vegas.

By the Way fan favorites “Don’t Forget Me” and “Universally Speaking” made the cut, as did Californication‘s “Right On Time,” with “I Could Have Lied” making a rare appearance in the encore before the night-capping “By The Way.”

Throughout the show, the Chili Peppers seamlessly transitioned between older material and Unlimited Love songs “Black Summer,” “Here Ever After,” “These Are The Ways” and “She’s A Lover,” which mixed well despite the new material obviously being used as a chance for some in the crowd to go grab another beer or hit the restroom line. 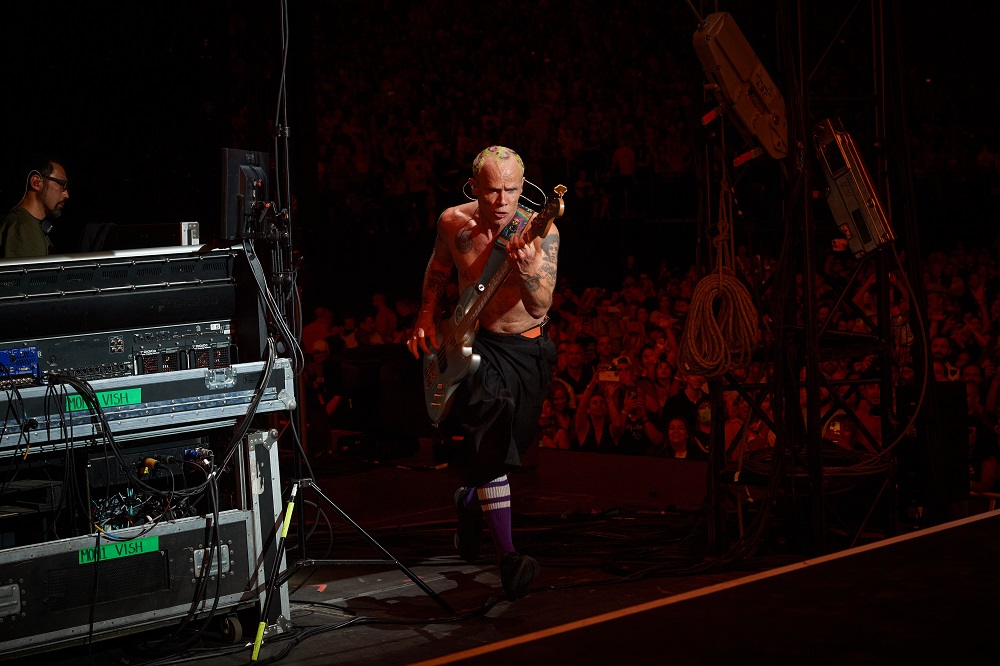 Encore:
I Could Have Lied
By the Way

The performance was a flashback to an era of rock and roll we don’t have anymore, really. The multi-generational assortment of artists, which ranged from King Princess’ twentysomethings to the Strokes (early forties) and the Chili Peppers (pushing 60 but acting like they’re in their thirties) led to a trip through rock and roll’s past, present and future, and the way it all meshed together into a dynamic night of entertainment was special to behold, and likely won’t be forgotten by anyone who witnessed it (at least those that didn’t have a little too much Vegas-style fun).

The Unlimited Love tour finds the Red Hot Chili Peppers at their best. Frusciante back in the mix worked like a time machine, really, and clearly reinvigorated their musical spirit so much so that they have another new album coming in October (click here for more on that).

Catch a show on the remaining dates below if you’ve ever wanted to see the Chili Peppers live — because this tour is a can’t-miss treat for fans, whether you’ve been with them since the 1980s,got into them through your parents or older sibling or just dove into the back catalog on Spotify.