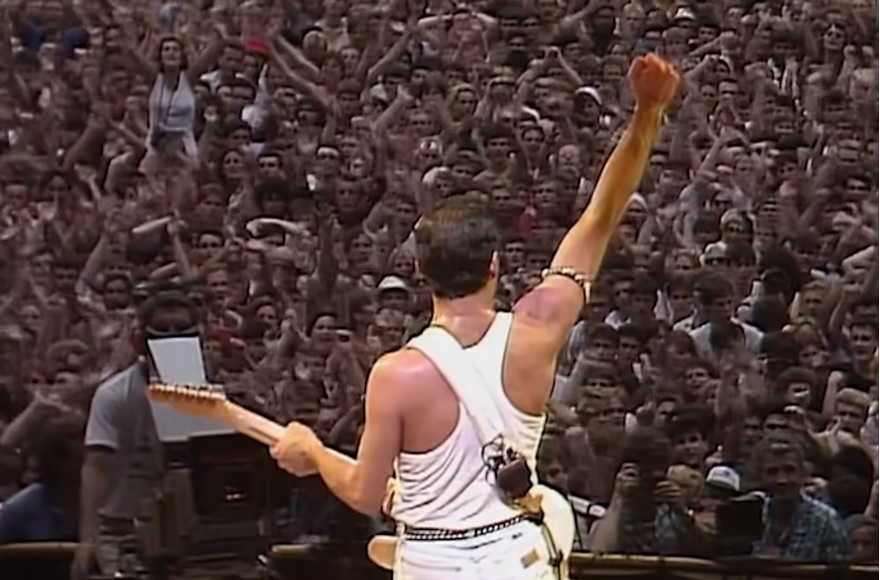 July 13, 1985 was a key date in the history of Queen, the date of the iconic Live Aid concert to raise awareness and money for a devastating famine in Ethiopia. Though the English rock band only played a 20-minute set, the performance was viewed around the world by millions and, in the band’s own recollection, was a crucial moment in the group’s career.

A look back on Live Aid ’85 is the focus of the latest episode of Queen: The Greatest, the ongoing YouTube series chronicling specific moments in the band’s existence. More on the impact of Live Aid, per a news release:

Brian May: “It was actually at the BPI Awards that we went to collect an award, and Geldof was a few tables away and came over and said how about doing this thing, and he said we are going to have this, and this, and this, and this, and we said ‘oh yeah, I’m sure,’ thinking that it was an almost impossible thing to get together, but we said ‘yeah,’ we’d be interested.

In '85 a host of music stars came together for Live Aid;a concert to raise money for the famine in Ethiopia. Watch⬇️https://t.co/YuY0rMvXmf 🎥 pic.twitter.com/ZTlDQ4d42Q

“And then a bit later he rang up and said ‘look Brian, I have to have a commitment,’ and so we talked about it a bit more and seemed like we were all very keen to do it.”

With just twenty minutes allotted to each act, Queen locked themselves away to work out the best way to make the most of their time. Not an easy task, as the band reveal.

Brian May: “It’s pretty hard to make the choice.”

Roger Taylor: “Yes, we don’t really know quite what to do, whether to play the hits or to try and do something new. But I think in 20 minutes really, we’ve got to play things that people know, and will recognise in Turkey or wherever they’re watching. Maybe. Hopefully.”

Freddie Mercury: “So we’re still squabbling over that fact that’s what he’s trying to say.”

Despite everyone being committed to the cause, the band felt a bit of healthy rivalry between the various acts was also inevitable…

Freddie Mercury: “I think it’s going to be chaotic, yes, it has to be. I mean we’re the nice part of it actually, there’ll be lots of friction and we’re all going to try and outdo each other I guess.”

Watch the episode below: