Home / PUP Experiences the Highs, Lows, & Scandals of Fame and Rocks the Moon in New Video for “Totally Fine”

PUP Experiences the Highs, Lows, & Scandals of Fame and Rocks the Moon in New Video for “Totally Fine” 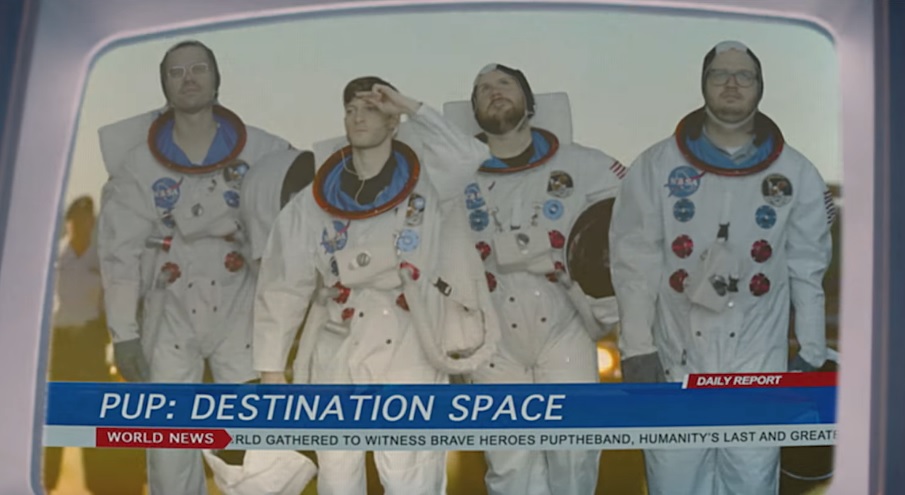 When is a band more than a band? In the new music video for “Totally Fine,” Canadian punk/indie band PUP experiences it all.

New Song “Totally Fine” + The Greatest (stupidest) music video ever made out now! Directed by @lowbranches. “It’s like the movie speed, except it’s about money instead of a bus, and the only thing we’re taking hostage is your mind”. Buckle up, freaks. https://t.co/6Wh1baCr54 pic.twitter.com/CVIpFBYWif

It’s all part of the PUPTHEBAND experience, as depicted in this wildly engaging video:

“We wrote ‘Totally Fine’ after a long creative drought,” said the band in a statement about the song. “We all agreed to take a break from PUP during lockdown, to take some time to deal with our mental health and get some space from each other. After 3 months of not writing any songs, ‘Totally Fine’ was the first thing to pop out. It broke this creative dam wide open, just months worth of pent up frustration all smashed into this one song. After that, we ended up going on a bit of a tear and wrote the rest of the record really quickly. The drumming on this song still blows our minds. It’s so manic and wild and makes the song feel like it’s about to fall apart at any moment, which is kinda like how it feels to be in PUP.”

“Totally Fine” is featured on The Unraveling of PUPTHEBAND, a new record that will be released on April 1.

PUP has been sharing songs from the record for a few weeks. “Matilda” was also debuted recently, essentially an avenue by which guitarist/vocalist Stefan Babcock comes to terms with the “guilt and sadness and shame” he felt after casting aside a guitar he used to play all the time:

The circumstances of the album’s recording process, which came during the still-present COVID-19 pandemic and in the aforementioned “bat-filled mansion,” lent itself to a particularly inspired setting. As a news release states:

With more time in the studio, they were able to craft their songs sonically in a way they were unable to in the past, and allowed themselves to incorporate new instruments like piano, synths, horns, and more for the first time. Though made in madness-inducing isolation (aside from Peter and the bats, of course), PUP were remotely joined on the album by Sarah from Illuminati Hotties, Kathryn from NOBRO, Mel from Casper Skulls, and Erik from Remo Drive. The result is not just the next PUP record, but the *most* PUP record.

The band also has a slew of tour dates coming up soon, including a coveted spot at the Coachella Valley Music & Arts Festival in April: