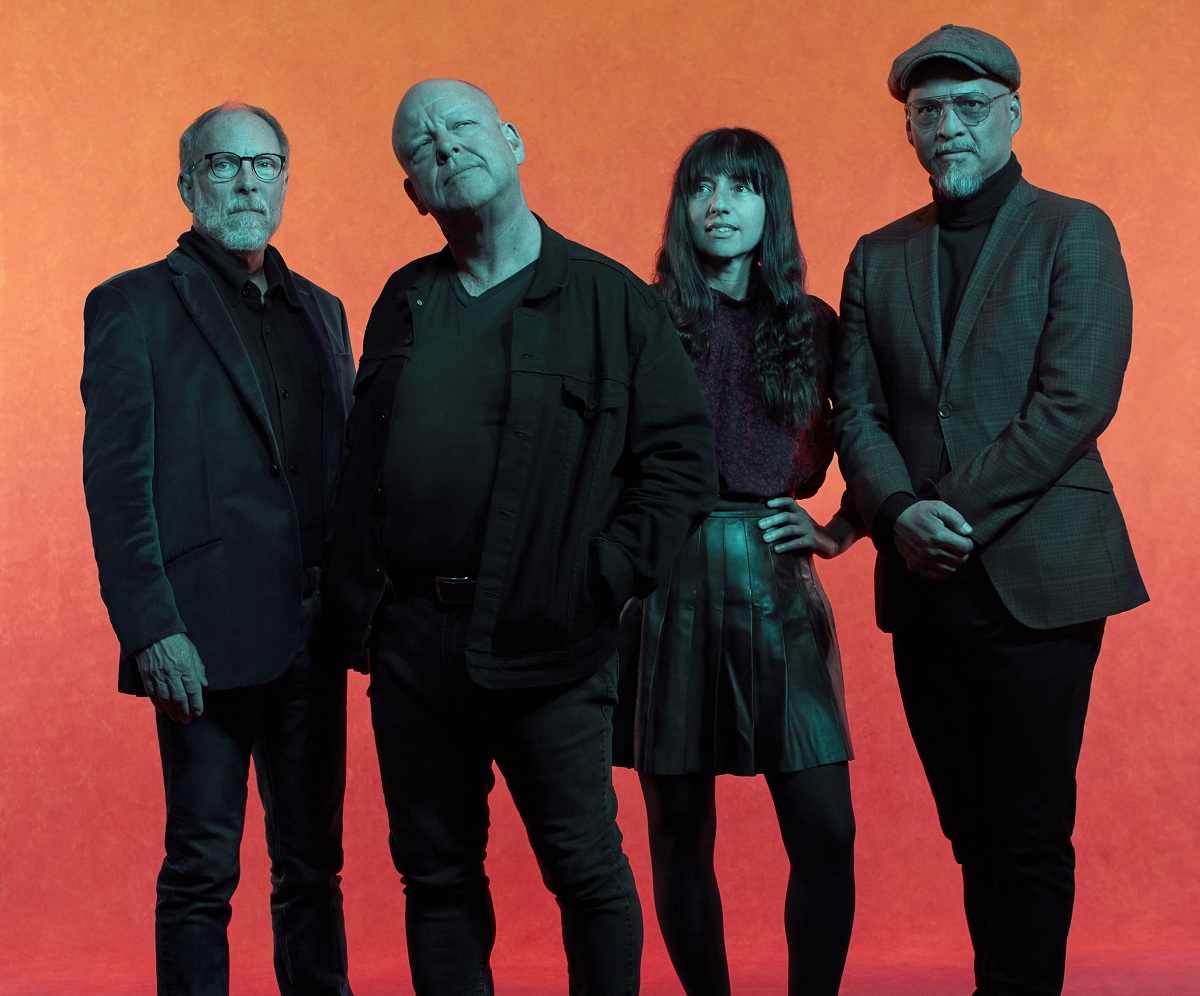 Something rare happened when Pixies were making their eighth studio album Doggerel, which was released on Sept. 30. Joey Santiago finally snagged his first co-writing credits after 25-odd years as lead guitarist. He contributed music on “Dregs of the Wine” as well as some lyrics to “Pagan Man.”

The first tune finds vocalist/guitarist Black Francis (AKA Charles Thompson IV) name checking Van Halen and comedian Redd Foxx and singing autobiographical lyrics about the pair partying in Las Vegas and drinking under the Hollywood sign back in the day. The guitars shift between Pete Townshend-styled acoustic fury and frantic electric work.

Santiago had always assumed that “Charles liked to be at the helm all the time,” but the front man casually asked in passing whether Santiago had anything to offer. During some COVID-19 pandemic downtime, Santiago bought a mahogany 1950s Martin 0-18 acoustic guitar from Norman’s Rare Guitars shop in Tarzana, Calif. and felt especially inspired.

“I just started playing it and coming up with some solid stuff that sounded like it belonged within the Pixies realm,” he said during a recent Rock Cellar interview.

“There was the initial riff — the intro. I had everything. The only idea I wanted for the arrangement was to have one fast chorus appear and then, ‘go!’ That’s it.”

Recorded earlier this year at a Vermont studio, the compelling new album was produced by Tom Dalgety (Royal Blood, Rammstein), who previously helmed the Boston-bred band’s last two efforts Beneath the Eyrie (2019) and Head Carrier (2016). The previous experience with Dalgety made everything run smoothly.

“We’re generally on the same wavelength,” affirmed Santiago, who also said being together with his fellow bandmates again after the height of COVID restrictions “felt like an easy way to get back into normalcy.”

Another benefit was the availability of three dozen or so nearly finished songs. Many were initially earmarked for an Americana-leaning Frank Black (Thompson’s other stage name) solo album before being molded into Pixies material. Santiago said their only creative mindset was “Charles will [play] more acoustic guitar. That kind of vibe.”

Once Dalgety whittled down the best of the lot, Santiago knew “there were some obvious ones that we were going to definitely make.” When the guitarist initially heard “Get Simulated,” he thought, “OK, this is going on [the album]. I need to chart this one out and get it ready.’”

The tremolo electric guitar notes that open the doom folk standout “Vault of Heaven” are instantly identifiably Pixies. While some of Santiago’s trademark sounds do get sprinkled among the songs, he “can’t do it too many times in an album. Otherwise, it’s just not fun for me.”

Another highlight is “Thunder and Lightning,” where the choruses each have a different vibe, there’s a quick countdown in Spanish and Santiago’s rich solo has a George Harrison feel. Dalgety encouraged him to experiment and do weird things in the studio.

Santiago confirmed the Beatles (as well as Les Paul, Wes Montgomery, Chet Atkins, and Jimi Hendrix) was among his formative influences. “Definitely. I’m all about guitar parts, rather than flares, guitar fills. I like those, but the guitar parts are obviously more fulfilling.”

“I’m very much a fan of that,” he said. “Anything instrumental, I love. Spaghetti westerns are a grown-up version of surf music.”

Pixies music is frequently attached to album or song titles that can send curious fans scurrying to the dictionary. This new release is no exception. Doggerel is defined as: loosely styled and irregular, especially for burlesque and comic effect; marked by triviality or inferiority. Then there’s “You’re Such a Sadducee.” A Sadducee was a member of an ancient Jewish sect. Santiago said nothing surprises him when it comes to Black Francis’ odd song lyrics or titles.

Although Pixies have moved beyond the brief two-minute tunes that comprised the group’s early material, Santiago says the musicians still add little twists to their more conventional arrangements.

Widely considered among the most influential bands to emerge during the nascent years of college/alternative rock, Santiago and Thompson met while attending the University of Massachusetts at Amherst (they lived in the same suite; Santiago majored in Economics). Thompson went to Puerto Rico on a student exchange trip to study Spanish and then returned to U Mass before dropping out.

The pair formed the Pixies in 1986 with Armstrong rechristened Black Francis. They advertised for musicians, Kim Deal answered first, and agreed to play bass. Her husband suggested David Lovering as the drummer. The Come on Pilgrim EP emerged the next year on U.K. indie label 4AD, followed by full-length debut Surfer Rosa in 1988.

“It was unbelievable,” recalled Santiago. “Growing up, I looked up to him and was a big fan — still am. For someone like that to compliment you like that is surreal.”

Pixies recorded three more albums and notched half a dozen hits at alt-rock radio such as “Monkey Gone to Heaven,” “Here Comes Your Man,” “Velouria” and a cover of Jesus & Mary Chain’s “Head On” before splitting up in early 1993.

Santiago contributed to some Frank Black albums before moving onto film and TV scoring work. One project was the shrewd 2001-2002 college sitcom Undeclared, starring then-up-and-coming Seth Rogen, Charlie Hunnam and Jay Baruchel. It was created, executive produced and usually written by Judd Apatow.

“I got spoiled working with him because that was the first big project I got other than the first film I cut my teeth to [2000’s “Crime + Punishment in Suburbia”]. Then I got called to work with Judd. I didn’t know what he’d done besides ‘Freaks and Geeks.’ It was so easy to work with him.”

Pixies reformed in 2003 and toured regularly over the next decade until Kim Deal left and was eventually replaced on a permanent basis by Paz Lenchantin (A Perfect Circle, Zwan). Her sublime backing vocals and bass playing are more prevalent than ever on Doggerel.

Santiago said he’d rate her ability to gel with everyone since joining up “an A+ all the way around. She’s definitely in the fold. We all get along with her – that’s the most important part. She’s such a great player. She knows the DNA of the Pixies, so she keeps it intact and holds it dear to her heart.”

Thinking about the Pixies’ first incarnation, Santiago said he considers Bossanova to be his favorite album and one that best encapsulates the band. He feels the musicians were fortunate not to fall into popular ’80s production traps.

“We weren’t into the gated snare [drum] at all. We just wanted to be as natural sounding as possible.”

Santiago definitely believes his guitar playing has improved over the years. “I think I am a better player now. I trust my instincts. I don’t have to really be more cognizant of what chord I’m playing with. If I’m coming up with a guitar line, the results are a lot easier to get to.”

Pixies will do a few U.S. club shows before on a world tour of South America, Japan, and Australia through the end of the year. In 2023, the band is scheduled to perform in Europe and the U.K, with a major North American tour also in the works.