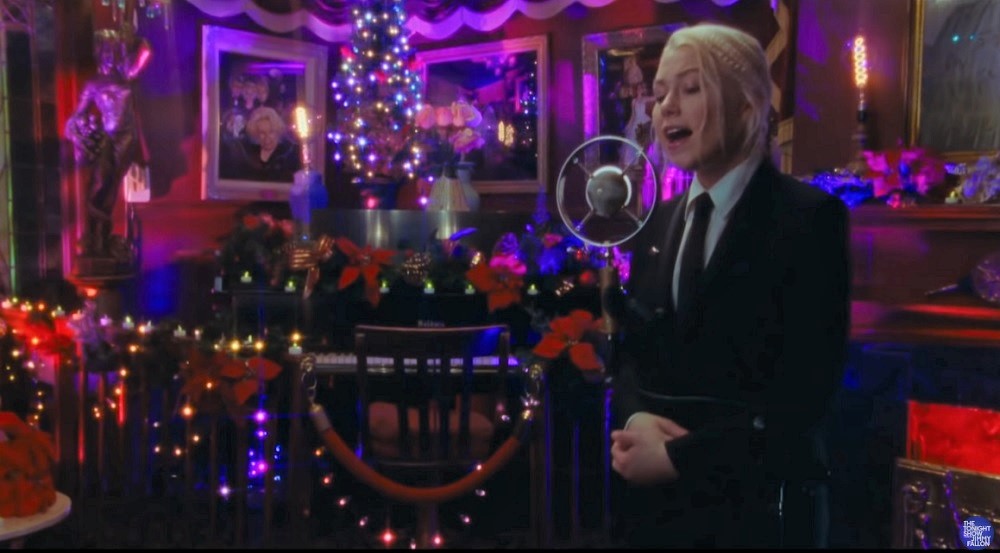 On Wednesday night, Bridgers debuted a performance video for “Savior Complex” on The Tonight Show Starring Jimmy Fallon, but this one’s pretty unique. Featuring Bridgers in some sort of Christmas-themed room full of decorations (and to an audience of two dogs), Bridgers sings along as a player piano she calls Irma drives the arrangement forward.

It’s all very elegant and slightly irreverent, as expected:

“Savior Complex” is one of the standout tracks on Punisher, as well as one that Bridgers and arranger Rob Moose revisited recently for the four-song Copycat Killer EP.

Phoebe Bridgers also recently released a cover of the Goo Goo Dolls’ 1998 hit “Iris” with Maggie Rogers — also the result of a chance conversation on social media and also an effort to satisfy the demands of Bridgers’ vocal internet audience.

Their collaborative cover became both Bridgers and Rogers’ first No. 1 debut on the Digital Song Sales chart:

Bridgers also recently debuted a cover of Merle Haggard’s “If We Make It Through December,” a benefit fundraiser for the Downtown Women’s Center, an organization in Los Angeles focused exclusively on serving and empowering women experiencing homelessness and formerly homeless women.

All of this activity comes as Bridgers was recently nominated for four GRAMMY Awards, including Best New Artist, and released a four-song Copycat Killer EP reimagining a few songs from Punisher with the help of arranger Rob Moose.

2020 has been a momentous year for the songwriter, to say the least, led by the runaway success of Punisher, one of the year’s strongest albums.