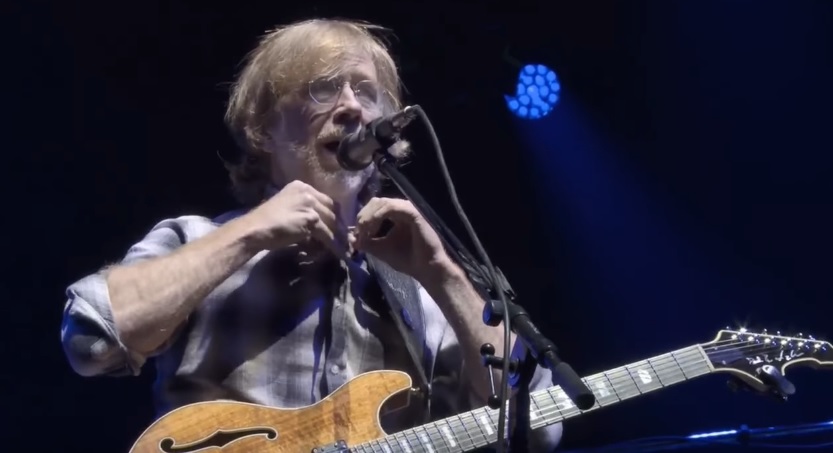 UPDATE: After the initial story of the death and injuries sustained in falls at last weekend’s Phish concert in San Francisco, band leader Trey Anastasio paused the next show in Oregon to pay respect and share a message of support to the Phish fan community. Via JamBase:

The full text of Anastasio’s words, via Live for Live Music:

“I just have to take… I can’t not… speak a little bit from my heart in this moment, if you guys will just bear with me and let me say a few words to our beloved Phish community.” Seemingly battling back tears, Trey continued, “At our last show, we had some really awful stuff that happened, and I just need to… we’ve all been… just, say a couple of words about how heartbroken we all are that the events in San Francisco took place.”

“First of all, I just want to name a couple of names here,” he said. “One of the gentlemen who went through the… that had this happen… is a guy named Keith Thompson, and just to show you how tightly-knit our community is, his wife, Carrie, is the event manager for the Sacramento Phish concert that we did. This is how close we all are. So our event manager from the Sacramento concert’s husband, Keith, is in the hospital right now and he had an accidental… it was just… he fell… and we want to send our love to him, and to Carrie.”

“And then,” he continued, “I’m gonna also send love to Evan Reeves, who was also involved in the accident, and was able to come back last night and sit over there afterwards, so go Evan! We love you!”

“I also want to say a few words for Ryan Prosser, the gentleman who passed away, and the Prosser friends and family,” an emotional Trey added as he fiddled nervously with his top shirt button. “I also want to say very quickly some words to all the people who… I know this affected everybody… and some of the people who were nearby this event, I know, had a lot of feelings… and they experienced this thing. So I’m sending out my love—we all are, I’m speaking for the band—sending our love to everybody in the whole community.”

“So, you know,” he added, “any time you have a series of events with large groups of people, things are gonna happen, but I don’t know if I can express how much we feel a part of this group of people who are here tonight and every night. And the people who can’t be here, watching on TV. We very much know and feel that we’re just four more people in this group who happen to be up here and you guys are standing there, but when something like this happens, it hurts us very deeply, and we want to send our love. Please be safe, and everybody have a great time.”

Two incidents claimed the life of one and injured two others this past Sunday night at the Chase Center in San Francisco, where Trey Anastasio and Phish were playing a gig to the gathered masses.

A pair of separate falls from the upper reaches of the venue, the state-of-the-art arena that doubles as the home court for the NBA’s Golden State Warriors, resulted in one death and two injuries, according to KPIX:

One person died and two others were injured in separate falls from upper-level seating during a concert at the Chase Center in San Francisco on Sunday night featuring the band Phish. https://t.co/u2j4Rpyu9g

A San Francisco police spokesperson confirmed to KPIX 5 on Monday that around 8:55 p.m., police were alerted to a person in need of medical assistance. When officers arrived, they found a man who was suffering from injuries caused by a possible fall.

“Medics arrived and immediately provided medical treatment, but despite the efforts of the emergency responders the victim succumbed to his injuries and was declared deceased,” the spokesperson said.

Police said there is no evidence of foul play. The Office of the Chief Medical Examiner was called to the scene and that the investigation into the death is ongoing. Officials have not released the man’s name.

A witness told KPIX 5 that the man fell into seats in Section 116 at the arena. The fall happened during the first set of the band’s two-set performance, according to reports.

“We felt this thud, it was a remarkable thud,” said Richard Langston, who attended the concert. “One of my friends said, ‘Is it an earthquake?’ And the other guy said, ‘I think someone fell.’”

With the second incident, a another Phish fan fell from Section 214 of the upper deck onto another man down below, but both were treated at the hospital for non life-threatening injuries.