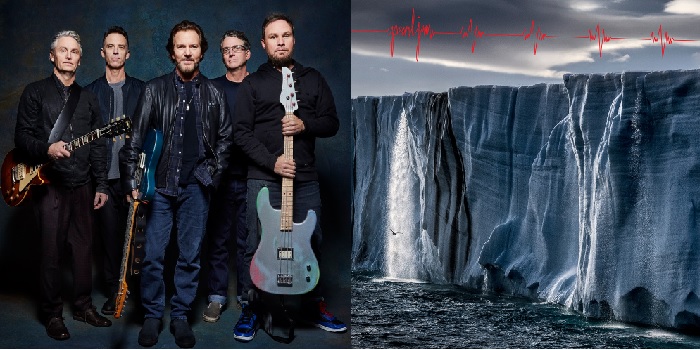 Pearl Jam don’t have anything left to prove.

The band released its new studio album, Gigaton, on Friday, and did so with an unassailable spot in music history already cemented. PJ’s in the Rock and Roll Hall of Fame, the band’s 2020 tour dates selling out near-instantly (before being postponed due to the coronavirus pandemic), and 2020 marks the fourth decade of the band’s existence — a career that has seen them outlast peers, transcend genres and expand a global audience of passionate, intensely dedicated fans.

Gigaton, the first PJ album since 2013’s Lightning Bolt, could have been one of those by-the-numbers records that veteran bands tend to do later in their careers — but not this one. Working with new producer Josh Evans, Pearl Jam — Eddie Vedder, Stone Gossard, Jeff Ament, Mike McCready and Matt Cameron — tap into a creative spring that will definitely catch some folks off-guard, especially those who didn’t expect innovation (and subtle electronic accompaniment!) from the band at this point.

Opening track “Who Ever Said” has false endings and an engaging, garage-y guitar riff that help make the song instantly memorable, and is a hell of a way to start things out.

After pre-release singles “Superblood Wolfmoon” and the funky, Talking Heads-ish “Dance of the Clairvoyants,” “Quick Escape” comes along and throws the listener for a loop, big time.

With Ament’s looping bass, Vedder’s deliberate vocal effects and a thick groove — not to mention a creeping, ominous guitar build that leads to some truly unexpected vocal in the hook — this track is a standout.

Throughout Gigaton, Pearl Jam explores various tempos and ideas, while not overtly being “a record about Donald Trump,” which is something that would have otherwise made sense given Pearl Jam’s political leanings and Vedder’s lyrics over the years.

Instead, it’s more nuanced, with one of the overall messages of Gigaton being one of hope amid the madness of everything else.

“Alright,” a song credited to Ament, is especially cathartic. It’s alright to be alone/To listen for a heartbeat, it’s your own/It’s alright to quiet up/To disappear in thin air, it’s your own sings Vedder in the chorus, gentle chords fluttering about. This is a song for late-night walks.

“Seven O’Clock” has a decidedly Springsteenian feel to it, building and building to a final two-minute stretch that will undoubtedly have an emotional impact on some listeners.

… with more experimentation in the form of “Buckle Up” and the acoustic “Comes Then Goes,” easily another high mark on the album, Vedder’s aching lyrics that could be perceived to be directed to Chris Cornell, without explicitly doing so:

Evidence in the echoes of your mind
Leads me to believe we missed the signs
Can I try one last time?
Could all use a savior from human behavior sometimes
And the kids are alright
The Queen of Collections took your time
Sadness comes ’cause some of it was mine

By the time “Retrograde” and “River Cross” (featuring Vedder on a vintage pump organ and delivering his most charged lyrics on the record) bring the album to a close, you’ll likely be blown away by Gigaton. This is one of the most cohesive albums Pearl Jam has put together in quite some time.

Fully refreshed and focused, they’ve put together an album that can stand proudly next to esteemed efforts from the ’90s, and that’s saying something.

Stream Gigaton below, via Spotify.