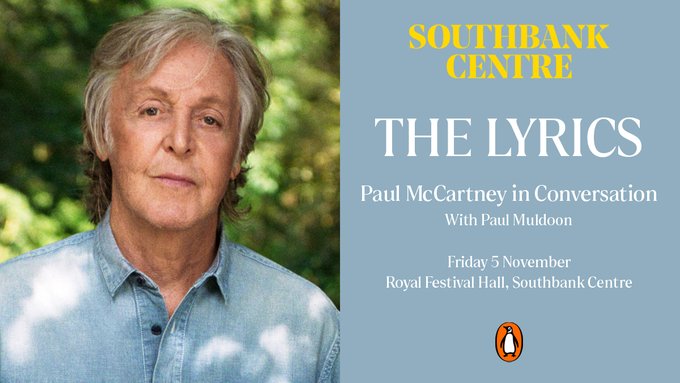 Sir Paul McCartney is preparing for the Nov. 2 publishing of The Lyrics 1956 to the Present, a new book spanning his entire career. The week of its release, McCartney will also participate in The Lyrics: Paul McCartney in Conversation, a hosted event with noted author Paul Muldoon and chaired by Samira Ahmed.

The event will take place at the Southbank Centre Royal Festival Hall in London, with a corresponding live stream opportunity to be made available for those around the world unable to make it to the venue for the special night.

Tickets for both the in-person and live streamed versions of the show will go on sale starting Friday, Sept. 17.

Paul will appear at @southbankcentre in a world exclusive event with Paul Muldoon and Samira Ahmed, to discuss his new book #PaulMcCartneyTheLyrics.

Some additional details about the event, via the Festival Hall website:

Hear them discuss the extraordinary book in which, with unparalleled candour, McCartney recounts his life and art through the prism of 154 songs from all stages of his career.

The Lyrics encompasses his earliest boyhood compositions through the legendary decade of The Beatles, to Wings and his solo albums to the present.

Arranged alphabetically to provide a kaleidoscopic rather than chronological account, it establishes definitive texts of the songs’ lyrics for the first time and describes the circumstances in which they were written, the people and places that inspired them, and what he thinks of them now.

Presented with this is a treasure trove of never-seen-before material from McCartney’s personal archive – drafts, letters, photographs – which make this also a unique visual record of one of the greatest songwriters of all time.

Don’t miss this unique opportunity to hear McCartney discuss his life, the creative process and the moments of inspiration.

Presented in partnership with Penguin Live

As for more on the book, it looks to be a treasure for dedicated Paul fans:

A self-portrait in 154 songs, by our greatest living songwriter.

Paul McCartney recounts his life and art through the prism of 154 songs from all stages of his career. The Lyrics is edited and introduced by the Pulitzer Prize-winning poet Paul Muldoon.

“More often than I can count, I’ve been asked if I would write an autobiography, but the time has never been right. The one thing I’ve always managed to do, whether at home or on the road, is to write new songs. I know that some people, when they get to a certain age, like to go to a diary to recall day-to-day events from the past, but I have no such notebooks. What I do have are my songs, hundreds of them, which I’ve learned serve much the same purpose. And these songs span my entire life” – Paul McCartney, Foreward to The Lyrics