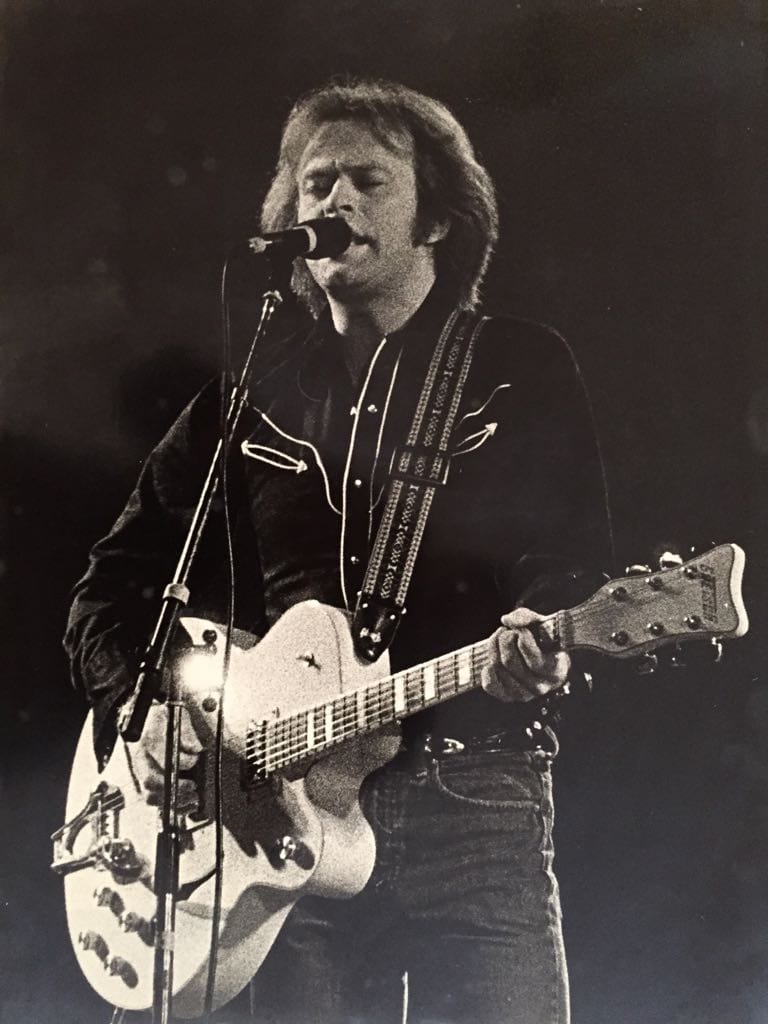 Singer/songwriter Paul Cotton, who made a name for himself as the guitarist/singer of Los Angeles-based country rock/Americana band Poco after taking over for Jim Messina in 1970, has passed away at the age of 78. His death comes roughly four months after Poco guitarist/co-founder Rusty Young died of a heart attack at age 75.

The following was posted in the comment section under that image:

* Please Respect the Family’s Privacy at this time –
Thank you in advance, Caroline Cotton

Recognized with multiple Gold and Platinum Albums and numerous other awards, Cotton blazed an unforgotten trail of Timeless songwriting, “inimitable” Guitar rifts and leads with his personal hand movements and tones, a pioneering fusion of blues-based rock guitar tone with Country music – his “Incomparable voice” reaching highs and lows making his Solo’s and POCO’s unique Harmonies inspirations for other bands like the Eagles, America & Crosby Stills & Nash to name a few.

Cotton is best known for his International composition Hits and Album Titles – “Heart of the Night”, “Bad Weather”, “Indian Summer”, “Under the Gun”, “Barbados”, “Firebird”, “the Coast is Clear”, “Changing Horses”, and a host of others. He sang Lead on POCO’S “Rose of Cimarron” along with Schmit. Painting pictures with his Lyrics, he was known for playing the Gretsch “Bird of Paradise – White Falcon” for decades.

Receiving his first Guitar at age 13, Cotton self taught, in addition to dismantling and reassembling each instrument he had . His first record was released in 1959 , while still in High School . His complete History can be found @ www.pocopaulcotton.com (which was being updated at the time of his death) = under the “Links” tab “Visit Rich’s Paul Cotton Archive site”, and “The Legend” Link. completing a SIXTY FIVE YEAR vocation that was in his Heart and Soul. Before Paul joined POCO, he co-founded Chicago’s “Illinois Speed Press” with his dear friend and Blues Great Kal David.

POCO, widely considered to be one of the ‘Founders of Country Rock’ sound, was formed from the break-up of 2 year old Buffalo Springfield, leaving Richie Furay and Jimmy Messina. Cotton replaced Messina in early 1970 when he joined Loggins and Messina. Cotton’s roommate in POCO, Timothy B. Schmit went on to join the Eagles, after they had tried POCO’s other Bass player Randy Meisner. Cotton was referred to Furay by Peter Cetera (Chicago), and gave POCO the needed “Rock Sound” as they had been labeled “too Country for Rock, and too Rock for Country”. After Furay’s departure in 1974 and Schmit in 1977, Cotton & Young resurrected POCO, and went on to win critical acclaim – most notably for their their joint collaboration album “Legend”.
POCO composed and recorded 24 Studio albums and are featured on an additional 25 Compilation releases.

Paul Cotton has released 4 Solo Albums – ‘Changing Horses’, ‘Firebird’, ‘Coast is Clear’ , and ‘100% Paul Cotton’ – released in 2014 and produced by Rosario Scavelli. He was in ducted to the Alabama Hall of Fame, TTHS Hall & Wall of Fame and the Colorado Music Hall of Fame in 2015- the last Reunion of original members.

In 2005, Cotton met, then married Caroline Ford of Key West, FL where they permanently reside and summer in Oregon. He is survived by his wife and two sons Chris and James, and four siblings. As a fervent fisher and sailor, his love for the Nautical life made his love for his Floribbean Keys community and the lifestyle inspiring for songwriting and his countless beloved Friends. His most treasured awards were Key West PAUL COTTON DAY – Nov. 15, Honorary KW Conch, and Keystock Lifetime Achievement Award.

After leaving full time band touring in 2010 – Cotton performed in Key West with The Paul Cotton Band of Key West, of San Diego, of Oregon, of Seattle, of the Midwest, and one in the Northeast . This made his Touring schedule his own, performing his own songs mixed with a few hits of his prior bands.

There will be a Private and Public Celebration of Life + a Concert + a Reign as “Grand Admiral” at the 2nd Line Parade the last week of January in Key West, FL. open to the public.
Information on contributing to his Music Trust Scholarship for low income students at TTHS is www,venmo.com/u/PAUL-COTTON-8 his heart would Soar for a contribution to others.

Always humble, grateful and sometimes shy this “Legend in his own write” and his music will live forever –

With Poco, Paul Cotton notably penned 1978’s “Heart of the Night,” one of the group’s most well-known hits:

In a post of his own, Messina mourned the loss of his “special musical kindred brother”:

“I woke up this morning to very sad news. Paul Cotton was a special musical kindred brother. We spent time together before he joined Poco and indeed gave me a great honor when he filled my position. He came back into my life once again around 1995 when my son was three years old and we had a chance to spend some gracious moments together. I am now so very grateful I had a chance to meet up with Paul in 2009 when we performed together once again. I last heard his voice on the evening of Rusty Young‘s Radio Memorial that was hosted by John Cowan. The sound of his voice is now forever imprinted in my mind and in my heart. May he, this very kind hearted soul, Rest In Peace.”

May Paul Cotton rest in peace.