"One Toke Over the Line" – More Than a "One Hit" Wonder

One Toke Over the Line by folk rock duo Brewer & Shipley was released in 1970 in an atmosphere of anti-war demonstrations and crackdowns on drug users. 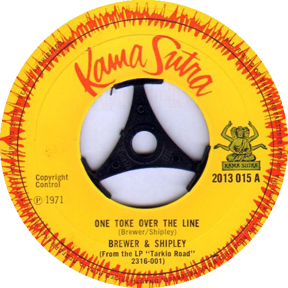 The song would become Michael Brewer and Tom Shipley’s biggest hit; so big that it caught the attention of Vice President Spiro Agnew, who termed the song – along with the Byrds’ Eight Miles High and Jefferson Airplane’s White Rabbit — “blatant drug-culture propaganda” that “threatens to sap our national strength.”
Despite its marijuana references, the song somehow was performed on that bastion of wholesome American music, The Lawrence Welk Show.
Produced by the Electric Flag’s Nick Gravenites for the album Tarkio, the Top Ten hit almost didn’t make it to vinyl.  Michael Brewer told Rock Cellar Magazine that when he and partner Tom Shipley wrote One Toke Over the Line, they didn’t think it was even worth recording… and that a little-known third verse was edited out before its release.
Rock Cellar Magazine: Tell us about your process for writing with Tom.  Does one specialize in the melody and the other the lyrics? 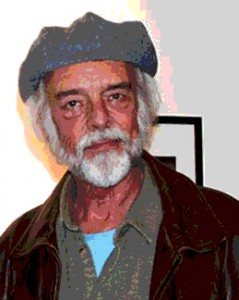 Michael Brewer:  No, nobody specializes in anything.  Way back when, when we were first together and writing songs, we were staff writers for a couple of publishing companies for A&M Records, which was brand new at the time.
We were just kind of crankin’ out songs ‘cause we were being paid to do that.  We learned early on that it really wasn’t our forte to just make up songs.  We always had a tendency to be more personal and express our own thoughts and feelings about things.  Of course, it was the ‘60s, we came from the folk era and folk music traditionally has been about social commentary.
I had a closet in my house in Hollywood.  It was a little bit bigger than a normal closet and it had a small window so some sunlight could come in.  And I had a tree stump in there with an ashtray and a candle and we would sit cross-legged facing each other and it sounded great in there.
We’d just sit around and jam and come up with licks and a melody would come from some place and a phrase would come from that and we’d just kind of bounce off each other.  Next thing you know we’d have a song.  Sometimes they happen in minutes and sometimes it takes days. 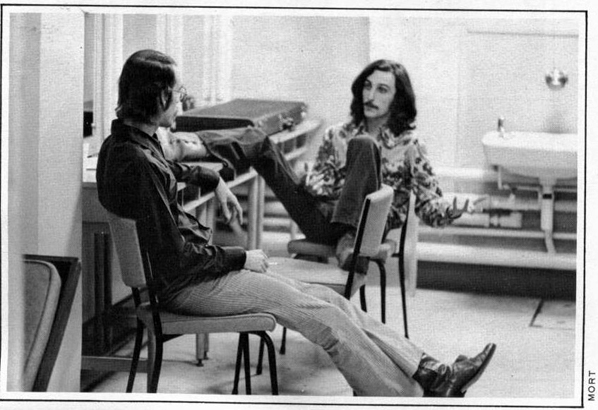 RCM:  How did that apply to One Toke Over the Line?
MB:  We were playing a little club in Kansas City, we had to do several sets a night and we were getting ready to go on for our last set.  We stepped outside, shall I say, for a breath of fresh air (laughs).  And we came back in and Tom said, “Man, I’m one toke over the line,” and it just cracked me up, I thought it was hysterical.
Just right on the spot, I started singing, “One toke over the line, sweet Jesus” and then we went on stage.  The next day we got together and we were sayin’, “What was that we were messin’ with last night?”  In about an hour we had a song, just entertaining ourselves.
RCM: Did you know it would be a hit?
MB:  No, we had no idea.  We didn’t even think about recording it.  In fact, the first time we played Carnegie Hall, we opened for Melanie, and we were working on our Tarkio album.  We went over really well, had a couple of encores, and then we basically ran out of songs.  We said, “Let’s do that new song.  Nothin’ to lose.”
So we did and everybody loved it.  The president of the record company we were with at the time came backstage and said, “Oh man, you gotta record that and add it to the LP.”  We were kind of like, “Really? Oh well, OK.”  We didn’t even take the song seriously.  Needless to say it came as a big surprise to us that they released it and not only that it was a big hit but it received so much controversy.  The government came down on us.

You gotta remember, this was back when the Nixon administration and the FCC were threatening radio stations with their licenses if they didn’t censor so-called drug lyrics in rock and roll.  That even included Puff the Magic Dragon. It was just ludicrous.

One night Vice President Spiro Agnew named us on national TV, named us personally as subversive to American youth and we made Nixon’s enemies list, which we held as a badge of honor, of course.  And we still do.
RCM:  Did it worry you at the time, career-wise?
MB:  You can’t buy that type of publicity!  Thanks to the people, they said, “Screw you” and played it anyway. It’s still played all over the world, it’s in movies, on TV. The phrase is part of the vernacular now.  It didn’t worry us from a career standpoint. 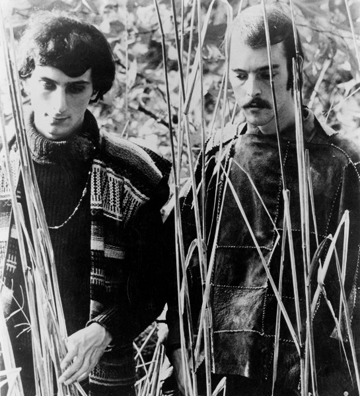 But there weren’t a whole lot of people in Nebraska and Iowa and places that even looked like us so we were really more concerned about the pressure from the police.  You didn’t want to get arrested.  And fortunately that never happened, we were never harassed by the police at all, which is truly amazing.
RCM:  Did the record company get nervous about all of that kind of attention?
MB:  No, I think the record company knew what they were doing in the first place.  They figured it was gonna be controversial.  We did every major TV show that was big at the time: Dick Cavett, David Frost, The Tonight Show.  We were always invited to go sit on the couch after performing but we declined because we knew that was the only thing they wanted to talk about.  We were sick to death of talking about that.  We thought there was a whole lot more to Brewer & Shipley’s music than One Toke Over the Line.
RCM:  So One Toke was uncharacteristic of your music?
MB:  To a certain degree.  We’ve written a lot of songs, we’ve recorded a lot of LPs and I can’t say that there’s anything else that particularly falls in the category of One Toke Over the Line.  It’s kind of a unique song.  It was just social commentary.  We were folk singers.
RCM:  Tell us about the recording session.
MB:  Nick Gravenites produced.  Nick is a blues guy from Chicago.  Mark Naftalin on piano, John Kahn on bass, Fred Burton on guitar, it was a bunch of blues players actually trying to play folk rock.  Nobody knew how it was gonna fly but we kind of created a sound of our own because of this confluence of styles and genres coming together and it kind of created a cool thing. 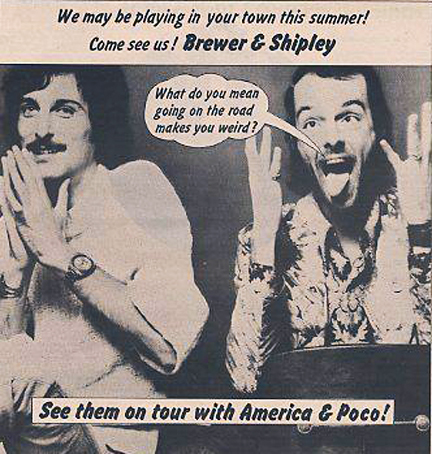 I do remember that it had a third verse and since they wanted to release it as a single, we had to go back into the studio and edit the third verse out because in those days, a single couldn’t be over 3 minutes and 10 seconds long.  So we had to go in and edit the third verse, not an easy thing to do in analog recording days.  We had to cut the master tape and hope we could cut it in the right place; the splices could screw up the whole recording.
The Lost Third Verse to One Toke Over the Line
I was born to give and take
And as I keep growin’
I’m gonna make some mistakes
The sun’s gonna set and the bird is gonna wing
They do not lie
My last wish will be just one thing
Be smilin’ when I die 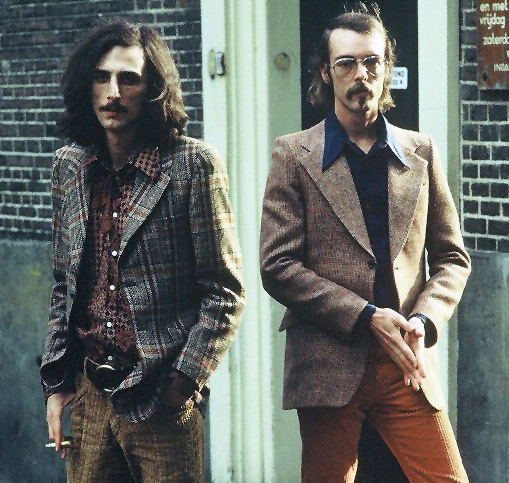 RCM: Do you perform it live with the third verse?
MB:  No, we don’t perform it live, in fact we leave out a couple of verses now!  It’s a long song anyway, it starts with the chorus, plus we can’t sing as high as we used to even though we’ve transposed it.  A lot of the songs we wrote back then were too high when we wrote ‘em, but then so were we (laughs).
RCM:  The Lawrence Welk clip.
MB:  It’s just bizarre.  We were in London so we didn’t even see it.  I didn’t even believe it. It took us 36 years to try to find a copy of that and a few years ago we did get a copy and that’s why it’s on YouTube.  That was on at exactly the same time the Nixon administration was coming down on us because of the song and Lawrence Welk referred to it as a “modern day spiritual.”

RCM:  What did you think when you saw it?
MB:  I sat there with my mouth open.  First of all, the accordion player [Myron Floren], I think it’s hysterical that he started choking and coughing when he introduced it.  That was really apropos.  You can’t tell me that some of the guys in the band didn’t know what the hell was goin’ on.  I’ll bet you anything they did.

To this day, I meet people who don’t know what it means.  Or they think we’re singing “one tote” – T-O-T-E – over the line.  Have you been living in a cave the last 40 years or what?

You listen to a song and everybody has their own interpretation.  Jackson Browne told me years ago, don’t ever explain your lyrics, because more times than not, you’re gonna discover that what you meant isn’t nearly as colorful as what somebody else’s interpretation is.
RCM:  How has your music evolved since the One Toke days?
MB:  We do still perform, we are still an acoustic duo and we just do the songs we think we can remember or the ones that we can still hit the notes (laughs) and our fans seem to think we sound as good as we ever did, bless their hearts.  We recorded for several different labels and several years ago we got tired of getting screwed by the record companies so we decided to form our own company and basically screw ourselves (laughs). And so far so good!
We’ve been together for a very long time and we like to say we’ve had managers and agents and record companies and bands and the only contract Tom and I have ever had between ourselves was a handshake.  That’s why we named our company Good Karma Productions in 1968.  We still believe a man is only as good as his word. 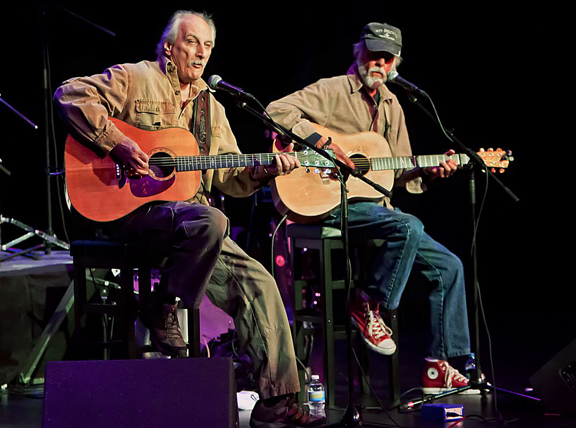 Brewer & Shipley’s debut LP, 1968’s Down in L.A., has just been re-released on CD. Michael Brewer has released three solo albums including his latest, Dancing With My Shadow.

brewer & shipleyone toke over the line