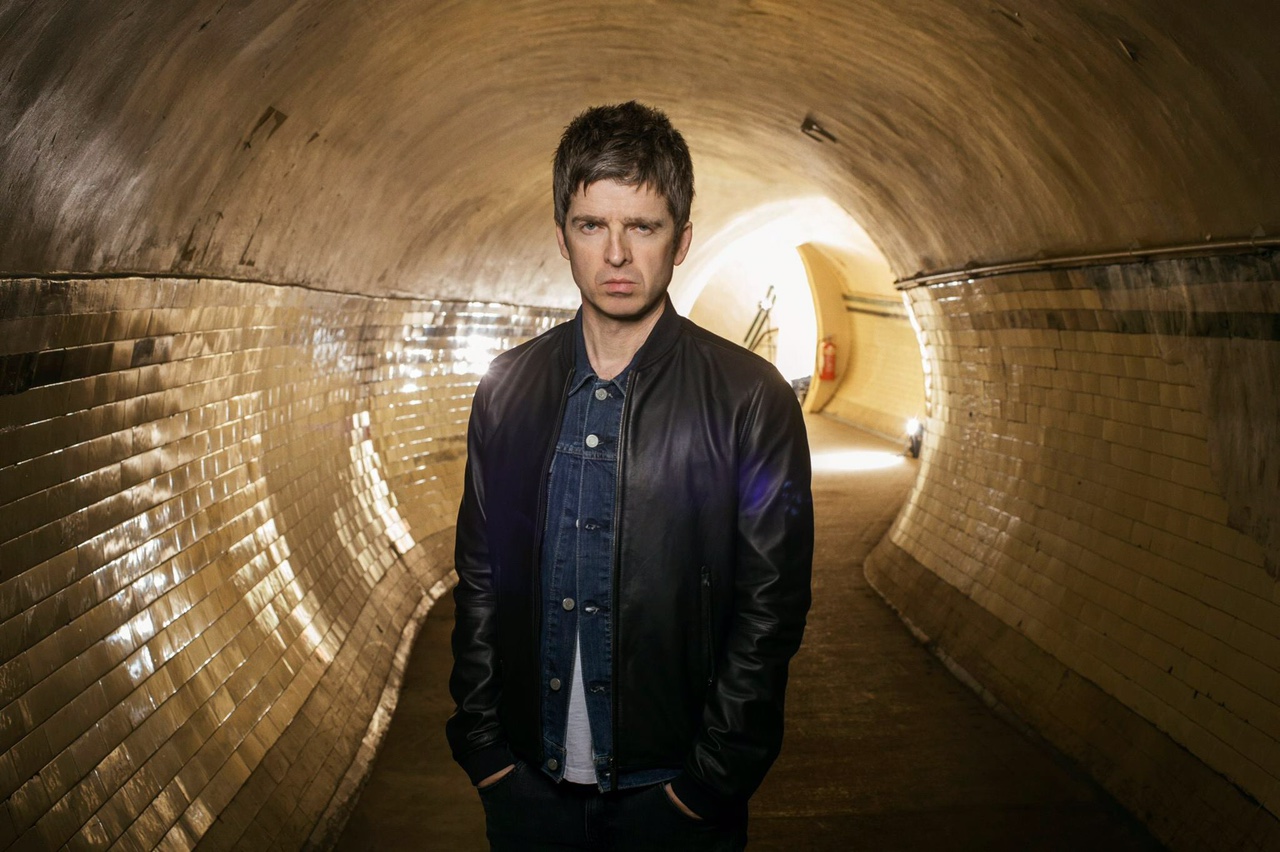 “If you take the title out of context, it does seem nostalgic,” Noel Gallagher confesses about the title of his new album, Chasing Yesterday. “But it comes from a lyric. The line is, ‘Let’s stop chasing yesterday.’ That’s the opposite of being nostalgic.”

The origin of the title, in fact, had a hasty birth.

“I’d kind of put off coming up with a title,” Gallagher says. “Eventually, one of the girls in my office said, ‘We need a title for the album today at 3.’ It was, like, ten past one, and I was hungover. So I quickly scanned through some of the lyrics on the record and that kinda jumped out. I wasn’t thinking that out of context ‘chasing yesterday’ would make me seem nostalgic. But then, it’s given me something to talk about in interviews.”

Of course Noel Gallagher has never been at a loss for words when it comes to the press. In fact, in the weeks leading up to our interview he took on the sad state of the UK pop charts, branding anything that reached number one “automatically shit”, blamed Twitter for the current crop of “boring” rock bands, and perhaps most famously said “I can’t live in a world where Ed Sheeran sells out Wembley Stadium.”

“No one wants to talk about the music, though,” Gallagher says by way of defending himself when I bring up his recent headline-making. Then, over the course of a fast-paced hour-plus long interview, the man they called The Chief during his days with Britpop megastars Oasis, and I talk about nothing but music.

His songwriting and recording processes, working with Johnny Marr and Paul Weller, and both Chasing Yesterday and its predecessor Noel Gallagher’s High Flying Birds, are all explored.

When I last spoke with Gallagher, he was new to being a frontman. “Talk to me in a few weeks and maybe I’ll tell you I’ve made a huge mistake,” Gallagher told me in 2011, not long before his first solo album and tour was launched.

But Noel Gallagher’s High Flying Birds was a huge success, selling more than 2.5 million copies, and the tour to support it moved quickly from theaters to arenas, expanding to nearly 18 months in duration in the process.

“There’s never a problem getting what you want,” he said of working with Gallagher, as well as his former band Oasis, for whom Sardy mixed 2005’s Don’t Believe the Truth and co-produced 2008’s Dig Out Your Soul. “Noel always brings 170% to the table. I think that in a situation where you have somebody like that as the leader of your band, that was one of the great things about working with Oasis. When things were running properly as a band, they would all bring far more than you could believe was possible. Noel, especially, and I established a kind of working relationship that wasn’t based on one of us just saying, ‘Sure, whatever you say!’ and giving each other thumbs up. It was an actual level of seeing how much better we could get. That process continued into the last record.”

That relationship was evident on High Flying Birds, an instant classic by any standard, with highlights like If I Had A Gun and The Death Of You And Me sitting comfortably next to any of Gallagher’s best songs from his years in Oasis.

“He’s non-stop,” Sardy told me. “You can’t imagine it. Guys will say, ‘Oh yeah, we had 45 songs to pick from.’ Noel really does, at all times, and usually new ones. And they’re at a high quality. Even if the song isn’t finished, or it’s kind of like an unfinished great idea, every demo will just sound hard to beat. Noel’s songs are to him like messages in a bottle and, from my perspective, he’s not always ready to send a message out. Sometimes he has songs written, but most of the songs on (the first solo record) I watched him write and rewrite. It’s a lesson to any young songwriter.”

Noel knows how to have a career. He doesn’t warm up. He writes music.

“When you’re going to do a take with him, he sits down and starts writing, practicing, and working on the song for an hour and a half before he’s ready to run a take. It sounds ludicrously straightforward and simple, but I can’t tell you how many artists I’ve met or people I’ve worked with who don’t get that that is what you are supposed to do with your time. Work out some songs!”

That work ethic certainly carried over to Chasing Yesterday. In fact, Gallagher began one of the songs, the barn-burner Lock All The Doors – some parts of which appeared in the track Setting Sun that he recorded with Chemical Brothers in 1996 – back during the earliest days of Oasis.

“If (a song like) Lock All The Doors takes 23 years to finish off, the 23 years are worth the wait,” Gallagher tells me.

“By the same rule, when I played people The Right Stuff, they were going, ‘Well, that’s a bit brave, isn’t it?’ I’d say, ‘Really, I don’t know what you’re talking about.’ If it’s a good recording of a great tune, that’s all that matters to me. I wasn’t thinking, while employing the saxophone player, ‘Wow, this will really fuck with peoples’ brains.’ I wouldn’t do that just because I thought it would be cool, anyways. It worked with the song. That was it. That’s all that matters to me, the song.”

The results are fantastic, and light years from anything Oasis ever released. But Gallagher can’t help but pull out his trademark bravado, to emphasize the point.

“I didn’t write these songs for this album, or for a specific project,” he says. “I just write all the time. I came to the studio with about 25 songs, and I never come to the studio without at least 20 finished songs. From those songs, there’s usually four or five that are going to make up the core of an album.”

You record them and then you just fill in the gaps to benefit the flow of the record. But really, the plan is simply to sell lots of fucking records and make millions of dollars.

While Gallagher plays most of the instruments on Chasing Yesterday – with able assistance from the drummer from his first album and touring band, Jeremy Stacey, and his longtime engineer, and Jeremy’s brother, Paul “Strangeboy” Stacey – calling on all star friends isn’t a big deal, owing to Gallagher’s A-list status.

“When you work with Johnny, it doesn’t become the Johnny Marr show,” Gallagher says of the former-Smiths guitarist, who appears on the single The Ballad Of The Mighty I. “He’s very sympathetic to what the song is and what he is going to do on it. He’s not just going to play all over it. He played what was needed, and that was it. It’s the same with Paul.”

By “Paul”, Gallagher of course means Paul Weller, one of England’s preeminent rock gods and a longtime friend. A true music fan, though, Gallagher is still in awe of the man known as the Modfather.

“I was in the studio with Weller recently, and he immediately wanted to write a song,” Gallagher confides, clearly bemused by the memory. “He was going, ‘Come on, let’s write something!’ I couldn’t. That’s not how I work. Plus, he’s several fucking levels above me, you know what I mean? It may seem that what we do is quite similar. But seriously? He’s touched by fucking genius. He is all about fucking looking forwards. He will not repeat himself.”

But the Stacey brothers, who along with Gallagher play almost all of the instruments on Chasing Yesterday, are clearly invaluable to him.

“He’s a great drummer,” Gallagher says of Jeremy Stacey, who played on both of his solo albums, and is at the core of his touring band. “He might be the most annoying individual I’ve ever met, though. He’s that way all the time. It’s just that he is an ongoing rolling thunder of annoyance. But what separates Jeremy from the rest is that he’s a fucking unbelievable drummer. It’s really the only reason I put up with him.

As for guitarist Paul Stacey, Gallagher, who is no slouch as a guitarist, holds the man who doubles as his engineer in high regard, too.

“I’m aware of my limitations as a guitarist, and I’m lucky enough to have a guy who’s a fantastic engineer who is also a virtuoso on the guitar,” Gallagher says. “He can play anything. You can throw anything at him. You can say you’ve got a song that sounds like David Bowie and want the guitar solo to sound like Ashes to Ashes, and he’ll just put it in and that’s it. I’ll play it, the guitar solo, and I’ll think I can’t do it. I hand it to him, and he’ll do it. He comes from a jazz background. It’s usually in that realm.”

“He came up with the bass line for the The Ballad of The Mighty I, because we had the track, it was all going swimmingly, and then we listened back and started to pick holes in it. I was thinking the bass line wasn’t memorable enough. It wasn’t great enough. I changed it around, did this and that. He would never ask me if he could play it. He waits. I just handed it to him and asked. Of course he’d seen me try different styles and fail, and he did something that I hadn’t thought about.”

As for his ever-fractious relationship with his brother Liam Gallagher, whom I’ve interviewed several times and seems to have a little less bluster each time, puts it straightforwardly.

“Do not believe what you read in the tabloids,” Gallagher says. “I’m happy where I am – and why would I want to be back in a band at 47, negotiating every decision – but that does not mean in about five or ten years it might not be negotiable. But at this moment I am happy with what I’m doing. And as long as that continues, Oasis will not be part of what I’m doing.”

As we wrap up I ask for a preview of the setlist and what fans can expect to see on the nearly two year tour Gallagher begins this week, but Gallagher isn’t tipping his hand.

“The best songs from the new album and the last one, obviously,” he says, matter of factly, also making it clear he’s not averse to adding an Oasis song or two to the set. “They’re my songs. When I was writing those songs there was no one else in the room. I wrote them so I don’t give a shit about who sang them before. I don’t see them like that. They belong to me.”