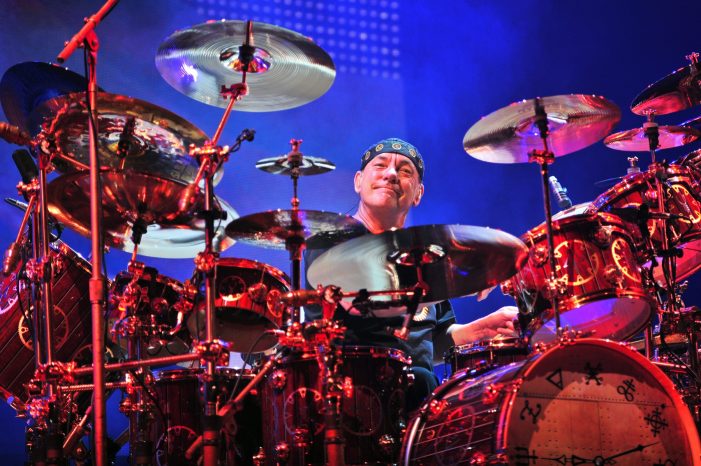 His death at age 67 came after a private battle with brain cancer, and left a massive hole in the rock music community. Such was the unanimous acclaim and reverence given to Peart for his steady presence behind the kit for Rush — as one of the central forces behind the band’s dynamic and fiercely original sound.

To mark the anniversary of Peart’s death, Rolling Stone has published a significant digital feature documenting what went on in the final few years of Peart’s life. The feature includes reflections from Geddy Lee and Alex Lifeson of Rush — the first substantial comments either has provided publicly regarding Peart’s death — as well as his widow, Carrie Nuttall, who provides some intimate glimpses into his final days.

As detailed in the piece, Peart was diagnosed with glioblastoma, aggressive brain cancer, in August of 2016, just one year after Rush’s final concert of its 40th anniversary tour in August 2015. The diagnosis came after Peart had experienced issues doing crossword puzzles, a favorite pastime of his, as well as exhibiting some unusual difficulties with his speech. Doctors estimated he had roughly 12-18 months to live, given the progression of the cancer.

Also unusual, as Lifeson recalled in the Rolling Stone piece, was a FaceTime call Peart made to him for his birthday before his brain surgery:

“It was so unusual to get a call from him, because he was never comfortable on the phone,” says Lifeson. “You’d get these beautiful emails from him. But he wasn’t that crazy about talking to anybody. I was in shock. But I could tell there was something weird. I thought maybe it was a difficulty with a connection or something. But he just didn’t seem like he normally was. And I kept thinking about it afterwards.”

More on how Peart revealed his diagnosis to his band mates:

A couple of weeks later, Peart sent an email to his bandmates with the news. He didn’t pull any punches. “He basically blurted it out,” Lee recalls. “ ‘I have a brain tumor. I’m not joking.’ ”

Lifeson was at a golf course when he got the message. “I think I started crying right there,” he says.

“You go into fight-or-flight mode,” Lee says. For Lifeson and Lee, the priority became finding chances to see their friend, who lived far from their mutual home base of Toronto.

Said Geddy Lee of the final few years of Peart’s life and the exchanges the band mates would have, expressing the uncertainty surrounding his future:

“In a way, every time you said goodbye to him, you said goodbye,” says Lee. “Because you honestly didn’t know. Even when he was doing pretty well. It was three and a half years of really not knowing. The timeline kept moving. So when you said goodbye, it was always a giant hug.”

Olivia Peart, the 11-year-old daughter of Neil and Carrie, is an aspiring drummer, continuing her drum lessons to this day. Said Nuttall of the loss of her husband and Olivia’s father, which came roughly two months before the COVID-19 pandemic limited travel to Canada (thus preventing interactions with Peart’s extended family):

There’s much more about Neil Peart and the effect his passing had on his inner circle and beyond in the Rolling Stone piece. Click here to give the full feature a read.

For more on Peart, click here to revisit Rock Cellar’s 2014 interview with the drummer about all things outside Rush — as he was very much devoted to his own personal time as “student of the world.” Regarding his method of writing books and crafting art, Peart took a moment and offered up this thoughtful response:

“The desire to share. And I love the tools of writing. I’ll draw a drumming comparison there, drumming is about communication also and trying to move people, and the tools of it are the drums. And I have the same fascination for words as tools as I did since I was a child, from crossword puzzles to reading.

I’m an immensely absorbed reader. I just fall into other peoples’ worlds, fictional or non-fictional very easily. So that makes me a good reader in that sense. The impulse to share, I think probably drives a lot of art. Not only because of the lonely voice crying out in the wilderness to be heard, but the desire to say “hey I love this, maybe you’ll love this too”.

And the simple way even I’ve defined our band’s music, it sounds almost glib to say it, but it really is true, we make music we like and hope other people will like it too. And that’s certainly my story writing ambition too, when something starts to get me excited then I want to convey that, and then that becomes being selective. And a trick I’ve learned lately is, if I find too many stories about a place, I know that can bog down a general reader where I tend to get very interested in a place after I’ve been there…I fall in love with it and then I learn all the history and want to share it.

But you can’t possibly expect a reader to read all that. So I’ve learned now, I drop the germ of where a story is and I’ll say “oh by the way this place  I’m traveling through, there’s a lot of great stories if you’re interested in checking it out”, and maybe give a couple examples and then other peoples’ curiosity follow from there. And it’s nice to know that it does I’ll discover through the responses I get from my stories, usually from a circle of friends but also from strangers.”