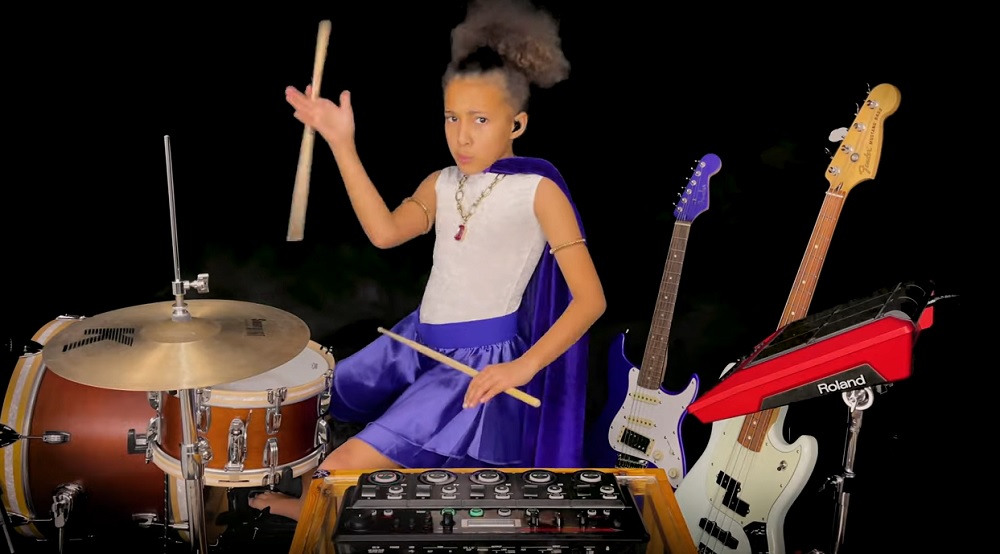 This past Saturday, Jan. 9, Led Zeppelin guitarist Jimmy Page celebrated his 77th birthday — and Nandi Bushell, the 10-year-old multi-instrumentalist whose series of YouTube videos have become international sensations the past few months, saw fit to honor him with a musical tribute.

To pay homage, Bushell shared a new video of her covering “Immigrant Song” on drums, bass, and guitar, via a recording loop.

The first time I heard the immigrant song by @ledzeppelin was in the movie #schoolofrock when @jackblack was driving the van, turns around and screams ‘ahh-aah’! #johnpauljones #johnbonham @JimmyPage and @RobertPlant, you guys are so awesome! #ledzeppelin #Rock! pic.twitter.com/PDdxOZos53

It’s all very impressive, as all of her videos are, really, and ought to bring a smile to your face:

This is the latest bit of awe-inspiring musical magic from Bushell, who elevated her profile significantly throughout 2020 with her YouTube channel managed by her parents. Last week, she dove into BritPop with a cover of Blur’s “Song 2”:

Wow! This is great! Nice one, Nandi x https://t.co/6UNoG6StUV

Nandi!! You’re unreal! I’m blown away by your passion and energy. Keep shredding on those drums! Next time we roll through your town, give me a shout — you gotta show me how you do that stick flip right there 🤘🏻🥁🔥 https://t.co/5JPvbPoALL

And don’t forget the Nandi Bushell vs. Dave Grohl “drum battle” back-and-forth series of videos last year, which were highly entertaining and resulted in this virtual meet-up:

Stay tuned for more from Bushell and subscribe to her YouTube channel to keep up to date. As for Jimmy Page, happy belated 77th!

We've been fortunate to interview him a few times over the years, most recently this year: https://t.co/SCZ3uIqely
📷: Mark Keraly, for Fender pic.twitter.com/bahG5VC9uw

Be sure to read our January 2020 interview with Page, from writer Jeff Slate — click here to do so. An excerpt:

Rock Cellar: Do you remember when your first saw an electric guitar?

Jimmy Page: Buddy Holly! On the cover of his album he was cradling this thing. The whole design of it was so avant garde, basically. I hadn’t seen anything that looked like this. So it was just absolutely phenomenal to actually see a Stratocaster for the first time. And, as I say, he’s cradling it. And obviously, that’s what he was playing, so you could hear the evidence, and you knew that’s what he was playing on things like, “That’ll Be The Day” and “Peggy Sue,” et cetera. The Strat sort of made a visual intervention, but certainly through Buddy Holly, through Buddy Holly’s playing, I mean, I think he he opened up the whole world to us with that. Of course there were others, too, that came along, you know, like Gene Vincent’s the Blue Caps, the lineup when they all had Strats, that were actually colored Strats, as well.

I mean, that was a dream to see a band with all the Strats, and an electric bass as well. We didn’t know they made basses!