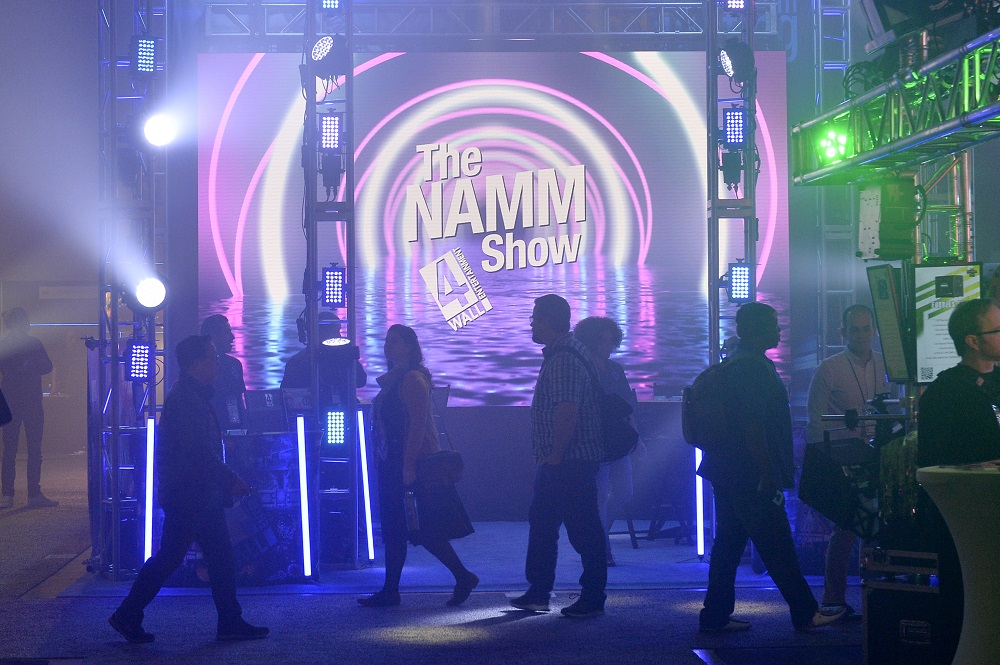 Rock Cellar contributor George. A. Paul recalls some of the standout moments from his time at the NAMM Show 2020 this past weekend in Anaheim …

From new product innovations and education sessions to live performances, artist signings and more, there is always a dizzying array of things to see and do at The NAMM Show. The music industry trade show is held annually at the Anaheim Convention Center and is only open to music industry professionals. NAMM 2020 just concluded after a four-day conference from January 16-19.

The first event on my Thursday morning schedule was “Stories Behind the Sessions: Bruce Springsteen’s Born in the U.S.A.” at the Harman International booth. Christian Hand, a DJ from KLOS/95.5 FM Los Angeles known for his “The Session” segments and Toby Scott, who engineered the classic album (along with many others in The Boss’s catalog) had a frequently fascinating 50-minute demonstration and discussion about the songs and recording process.

Scott provided some background about how several Born In The U.S.A. tracks originated from Springsteen’s solo acoustic predecessor, Nebraska. Since the latter couldn’t be mastered, it was released in demo form. Then he talked about the protracted BITUSA album sessions. When Hand played isolated instrument and vocal stems from the title track, it was surely a revelation for many Bruce fans in attendance. Scott said the original jam at the end of the song was cut down from eight minutes and noted how the melody structure was somewhat similar to “Hungry Heart.”

“You don’t need a lot of changes for a hit song,” he noted.

Having gone through multiple permutations, “once the Born in the U.S.A. song started in this (final) variation, it set the stage for the whole album.” Scott told how manager Jon Landau said they needed a single, so “Dancing in the Dark” was penned overnight and recorded at New York City’s Hit Factory while the other songs were still being finished at the nearby Power Station.

Then Hand cued up Springsteen’s amazing isolated Telecaster guitar and vocal tracks on the computer and projected it on a screen. “We would call Bruce’s guitar the ‘primal strum,” said Scott. “There is no restraint in Bruce’s vocal. I’d say, eight out of 10 times, we’d use a live first take vocal,” recalled Scott.

The engineer told a humorous story about how the studio owner often visited to check on how things were going, thus slowing down the process even more — until Landau asked Scott to politely ask the owner to stop showing up. “There were no other visitors during the sessions.”

Later, when Hand asked what advice Scott would give to young engineers, he replied, ‘when you’re working, do the best job you can.” As an example, Scott proudly said Springsteen’s 1995 acoustic album The Ghost of Tom Joad (that he also engineered) contained “all rough mixes.”

Backed by a solid three-piece band featuring Davey Faragher (Elvis Costello, Cracker), Jorgenson was impressive during the dynamic upbeat instrumental “Back on Terra Firma,” a feverish rocking take on Love’s “A House is Not a Motel,” B.B. King’s “How Blue Can You Get” (Jorgenson gave a shout-out to Gary the Fuzzman, who was watching nearby) and George Harrison’s hypnotic “Love You To,” complete with Indian music effects. Jorgenson really pulled out all the stops with his expressive playing at the end.

On Friday afternoon, the same stage saw Sweet Lizzy Project mesmerize the audience. The hot new Cuban rock band’s debut album, Technicolor, is due out Feb. 21 via Mono Mundo/Thirty Tigers and was produced by The Mavericks’ Raul Malo. The quintet made quite an impact during a catchy “Turn Up the Radio,” where Lisset Diaz’s wailing vocals recalled Alanis Morissette and Miguel Comas did some enticing reverb-laden guitar lines.

Other highlights included the attitude-laden delivery and raw lyrics of the new wave-tinged “Ain’t Nobody to Call”; the powerful “These Words” (which received a rousing response) and “Travel to the Moon” (where Diaz trilled a bit like Dolores O’Riordan). Toward the end, the band did a fine extended and moody cover of Pink Floyd’s “Another Brick in the Wall Pt. 2,” complete with searing solo by Comas. Definitely one to watch.

Back in the convention center, Graham Coxon of Blur demonstrated Swedish manufacturer Softube’s Console 1, a recording hardware and software hybrid, and accompanying Marshall amp plug-in. The Blur guitarist/singer used it to help compose the soundtrack for the British comedy/drama series “The End of the F-ing World,” which has premiered two seasons on Netflix thus far.

During the audience Q&A section, Coxon chatted for much longer than scheduled. He didn’t rule out another Blur album, saying it depended on timing and whenever band mate Damon Albarn was rotating projects like Gorillaz, The Good, The Bad & The Queen, etc.

“I love doing film and TV score work,” Coxon admitted. It keeps me learning and out of trouble … I’d score the news if I could.” As soon as Coxon read the “End” script, he started to write music, fashioning one song like 1990s-era Beck.

Various solo projects could come out in the future (there is a “lost” album done around the time of 2012’s A+E) because he’s done a lot of work in the last few years. There’s also another Netflix-related score set to debut next month with music referencing 1950s and ‘60s styles as well as bluesman Mississippi John Hurt.

When asked about influences, Coxon admitted to listening to a lot of Steely Dan last year, while more recently, he’s rediscovered classic Blondie albums like Parallel Lines and Plastic Letters.

“I was blown away by how much I hear myself in Chris Stein’s (playing). Blondie is overlooked and an incredible band. (The song) ‘11:59’ is genius.” Coxon also cited George Harrison’s guitar work as an inspiration.

“It happens over time and without you knowing. It has to do with how you identify as a guitar player. He also didn’t realize how much he’s been influenced by prog rock acts like Peter Hammill and Van der Graaf Generator. 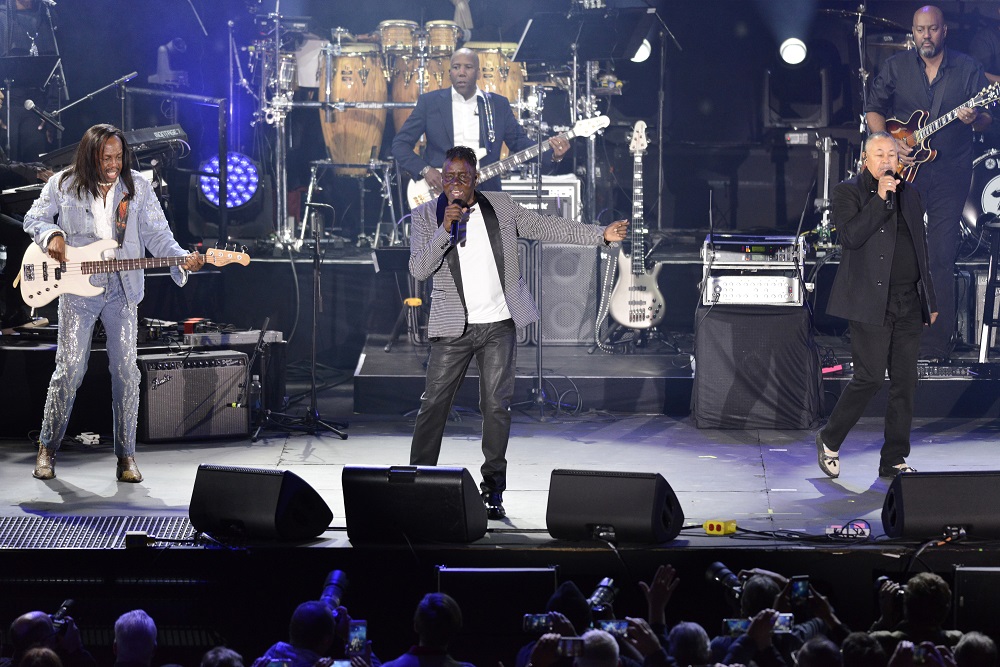 Yamaha’s big outdoor Concert on the Grand Plaza, again hosted by comedian Sinbad, focused more on urban music than in recent years. Then Kenny Loggins brought the pop with his hits “This Is It” and the rarely performed “Heart to Heart” (both co-penned by Michael McDonald), backed by the large house band led by vets Nathan East and Greg Phillinganes. And of course, Loggins did “Footloose.”

All the artists returned to the stage to close the proceedings with a cover of James Brown’s “Living in America.”