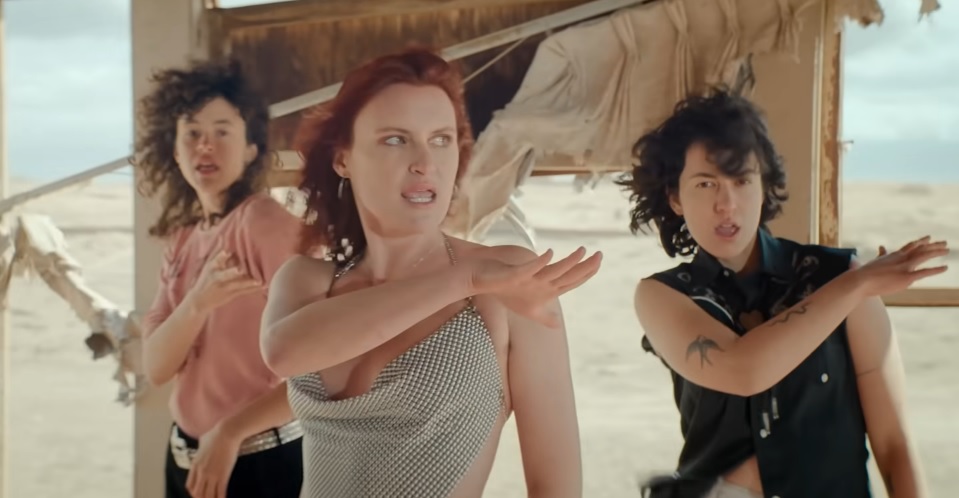 Los Angeles-based indie/pop band MUNA is ready for the spotlight — and on June 24, the band will release a new self-titled album on Saddest Factory Records, an imprint of the Dead Oceans label that was founded by Phoebe Bridgers in 2020.

On Wednesday, MUNA announced its new album and shared a music video for “Anything But You.” Depicting band members Katie Gavin (she/they), Naomi McPherson (they/them), and Josette Maskin (she/they) tied up in an abandoned shack before breaking free and escaping, the song is engaging and calls to mind groups like Wilson Phillips and HAIM with its vocal harmonies:

Said MUNA of the song/video:

“Breaking up is hard to do. In the past we’ve stayed in relationships for a long time, waiting until we hit low lows to admit it was over. “Anything But Me” is a song about leaving a partnership simply because it doesn’t feel right. It’s about trusting yourself and your instincts enough to walk away from someone while you still have love for each other and before it gets too bad. The video for the song plays with the idea that we’ve been our own captors in relationships, keeping ourselves in unhealthy dynamics, maybe because that’s what feels familiar. The song embodies the lightness and a playfulness that floods in when you realize that there’s no lock on the door, no one’s holding you back – you can untie the knot and skip into the sunset whenever you’re ready. Now, who can guess what attachment style I have?”

MUNA’s new album begins with “Silk Chiffon,” the infectious, ’90s-leaning slide of indie/pop gold that the band released in September with Bridgers and quickly attained reverent status as a “queer anthem”:

GRATEFUL TO SAY THAT OUR SELF-TITLED THIRD ALBUM WILL BE OUT 24 JUNE 2022. PRE-ORDER IS AVAILABLE HERE: https://t.co/VpL7vEqITk pic.twitter.com/aAExIKG5Cp

In addition to the album news, MUNA is playing special gigs in SXSW this week, and will embark on a headlining tour of North America in the fall.

HOPE TO SEE YOU THIS FALL IN NORTH AMERICA. ARTIST PRE-SALE STARTS TODAY AT 12PM LOCAL WITH CODE: GAYCHURCH. GENERAL ON SALE THIS FRIDAY 10AM LOCAL. https://t.co/UuwewHVBoS pic.twitter.com/3p5YGNAkZZ