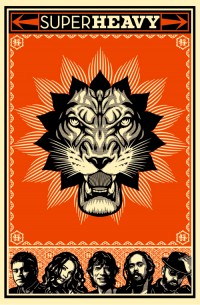 Billed as a “rock supergroup”, the album is expected to dip into various genres, considering its lead single, Miracle Worker, is a reggae song. Watch the video below.

The band recorded twenty-nine songs, but only twelve will make it onto the debut album. Considering the busy careers of each band member, there don’t seem to be any plans for SuperHeavy to go on tour in support of the album.