Home / Wayne Kramer Revives MC5: ‘Heavy Lifting’ Tour in May, New Album ‘We Are All MC5’ in October

Wayne Kramer Revives MC5: ‘Heavy Lifting’ Tour in May, New Album ‘We Are All MC5’ in October 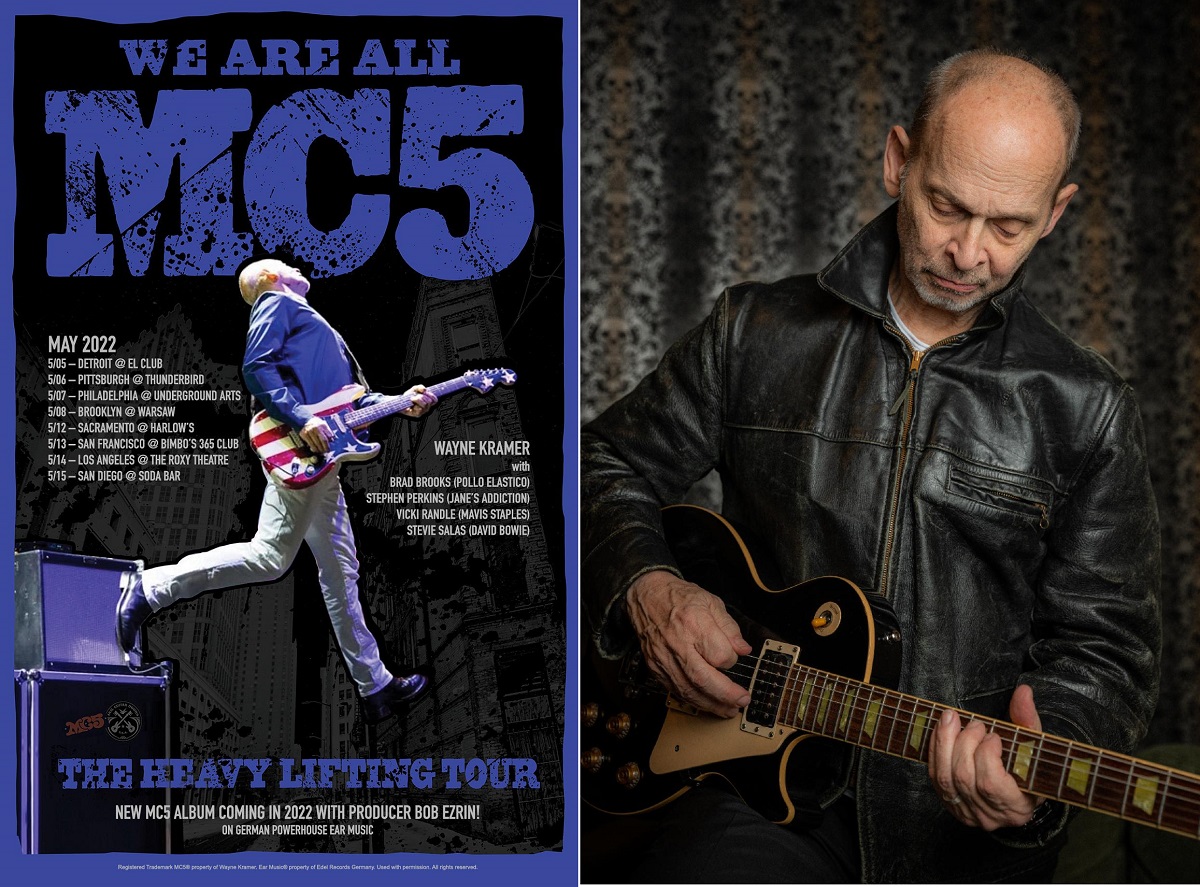 Basking in the glow of a long overdue Rock & Roll Hall of Fame nomination, Wayne Kramer has resurrected MC5 and will head out on a special tour in May — ahead of a new album in October, the first under the MC5 name in 51 years.

“Nonstop touring, especially the last decade, I’ve come to understand that the music of the MC5 is as necessary as ever. It’s definitely high time to write and record new songs and to carry a message of uncompromising hard rock to fans around the world.”

(It’s worth pointing out that Kramer wrote some of the songs featured on Detroit Stories, Alice Cooper’s mega-successful album from last year).

Ahead of the tour, Kramer and the MC5 will share two singles from the album, which will be released in October. Per a news release, both songs were produced by the iconic Bob Ezrin (Pink Floyd, Lou Reed, Alice Cooper, KISS) and engineered by 4x Grammy winner Dave Way (Paul McCartney, Fiona Apple, Neil Young) at his studio The Waystation.

A preview of the new tracks, which feature some of the artists who site the MC5 as heavy inspirations for their own careers:

The fiery guitar-dueling anthem “Heavy Lifting” is the A-side featuring Tom Morello, Don Was, Abe Laboriel Jr, with lead vocals by Brooks, and was co-written by Kramer, Morello, and Brooks. The B-side “Edge of the Switchblade” reimagines Kramer’s tribute to the MC5’s formative years, first heard on his acclaimed 1995 Epitaph solo album The Hard Stuff, in a new recording with Laboriel, Was, and special guest William Duvall from Alice in Chains sharing lead vocal duties with Kramer.

“We’ve just barely survived four catastrophic years of a failed presidency and a devastating pandemic. Brad and I started writing new music with the express purpose of pushing back against the cruelty of it all. It had become so polarized and depressing that bringing in other writers was like a hope injection. Tom Morello, Jill Sobule, Tim McIlrath, Kesha, and Alejandro Escovedo helped me expand the work using the most powerful weapon in existence: our creativity,” said Kramer. “Of course, Dennis ‘Machine Gun’ Thompson is playing strong now and driving the beat on two songs, so I’m thrilled about that, too. Bob Ezrin produces because he is not only the titan of rock but also the most natural choice to deliver this music to fans in search of songs that capture an ultra- amplified soul. The results are earth-shaking rock and roll.”

Stay tuned for more from this exciting revival of MC5 — and click here to read our 2018 interview with Kramer.