Live music and the entertainment industry as a whole may still be on a prolonged pause due to the effects of the COVID-19 pandemic, but Live Nation Entertainment has important plans for more than 100 of its venues across the United States: Among the company’s announcements this week is the activation of concert venues as polling places ahead of the Nov. 3 general election.

Per a news release, Live Nation is “working with local officials to examine the feasibility of using more than 100 Live Nation venues across the country as polling stations,” a list that so far includes confirmed arrangements with the Wiltern and Hollywood Palladium in Los Angeles, the Buckhead Theatre in Atlanta and Emo’s in Austin, with Philadelphia’s The Fillmore is “in the final stages of the vetting process.”

“We are proud to partner with Live Nation and announce The Hollywood Palladium and The Wiltern will be Vote Centers in the upcoming Presidential General Election,” said Dean C. Logan, Los Angeles County Registrar-Recorder/County Clerk. “Live Nation has stepped up to the mic in providing our community safe in-person voting experiences at two iconic music venues. It is collaborations such as this that demonstrate the spirit of community engagement and the strength of our democracy.” 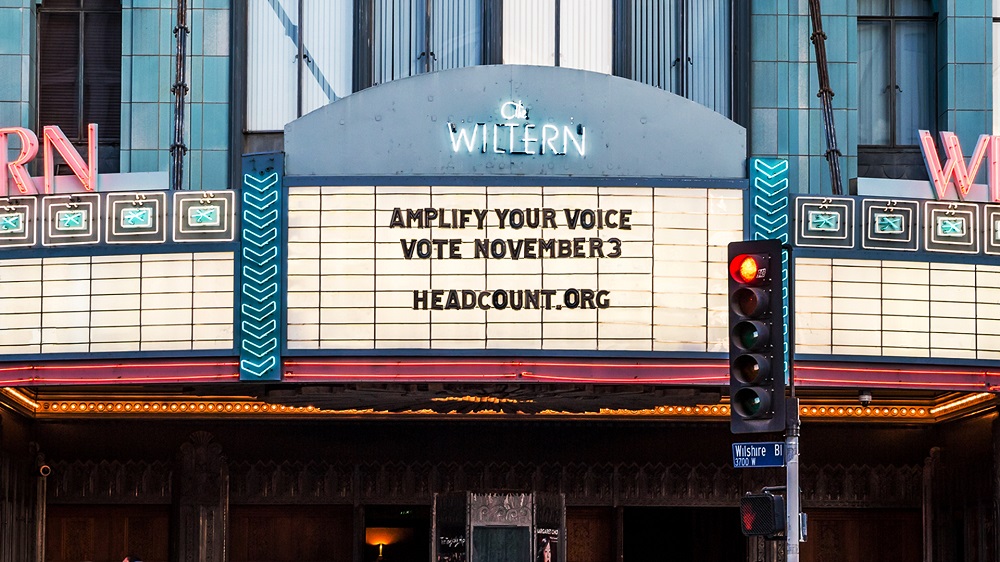 More on Live Nation’s efforts ahead of Election Day, which expand beyond turning dormant concert venues into polling locations, per a news release:

To support these efforts, the company is partnering with More Than A Vote, a coalition of Black athletes and artists dedicated to protecting voting rights, and Civic Alliance, a nonpartisan coalition of businesses working together to build a future where everyone can vote, volunteer, and take action to shape our country.

“By converting their concert venues into voting locations, Live Nation is creating a safe and convenient way for people to exercise their right to vote this fall,” said Michael Tyler, EVP of Public Affairs More Than A Vote. “Similar to the sports arenas More Than A Vote has worked to convert into voting locations, many of Live Nation’s venues are located in the heart of the communities that we are committed to empowering in this election and offer the same COVID protections due to their large capacity.”

As it usually does, Live Nation will provide up to one half-day of paid time off to all employees on Election Day. Furthermore, in an effort to address the national shortage of poll workers caused by the COVID-19 pandemic, Live Nation will provide any active employee with a full day of paid time off to serve at the polls. The company is partnering with Power the Polls to track employee participation and meet the needs for poll workers in communities across the nation.

Leading up to Election Day, Live Nation has also partnered with HeadCount, a non-partisan organization to use the power of music and amplify artist voices to inspire fans to register to vote and promote participation in democracy. Citizens can visit www.headcount.org/livenation to check their voter registration status and learn how to exercise their right to vote in November.