Liam Gallagher Goes It Alone with ‘As You Were’ — The Interview 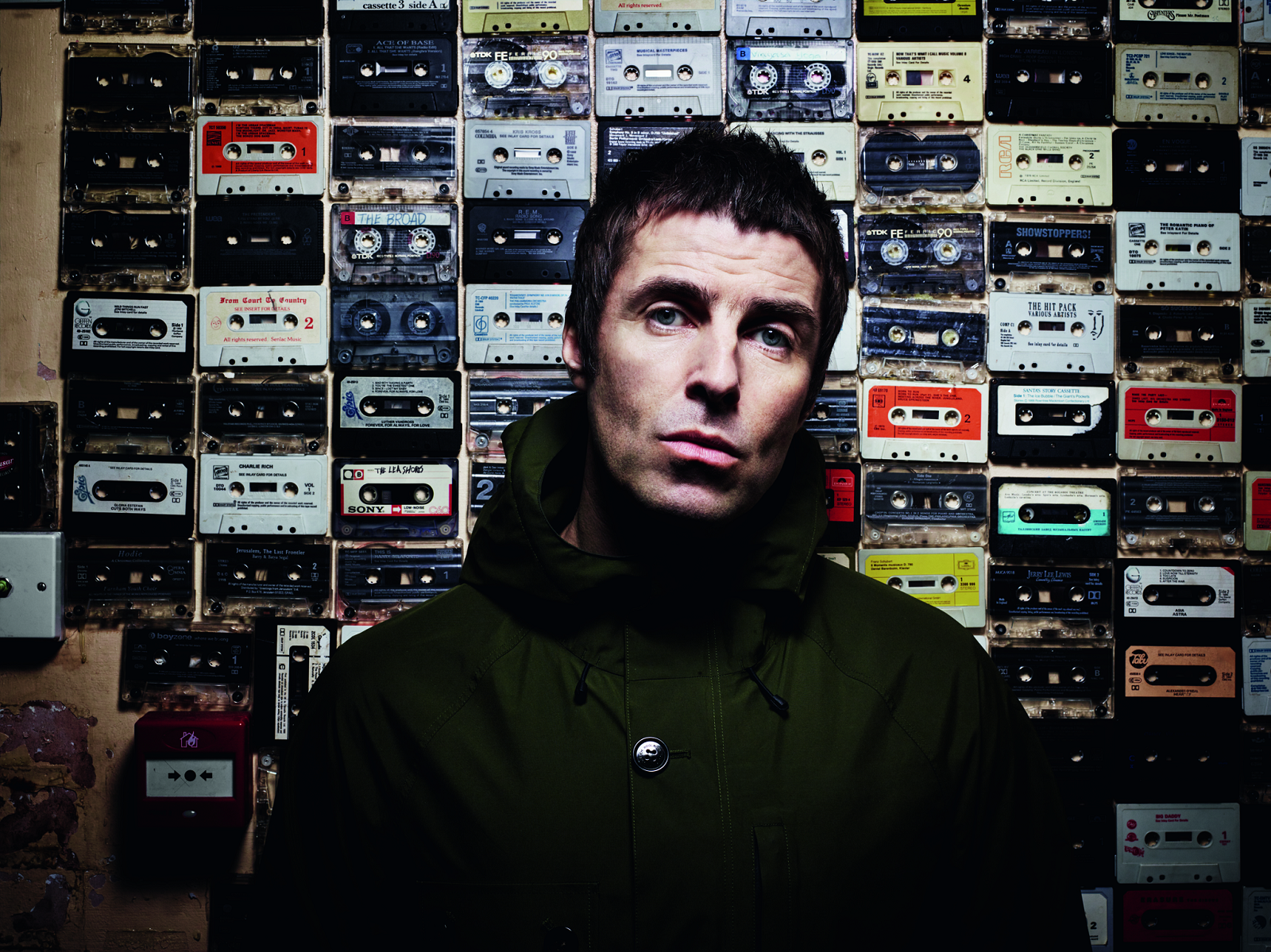 “We went straight into Beady Eye from Oasis, and just for whatever reason it didn’t connect,” Liam Gallagher tells me, pining just a bit for the days of that other rock and roll band he fronted. “Maybe we needed a timeout. I thought, by the way, that we had good songs, and I thought we’d done some good gigs. I just think people didn’t take to it, for whatever reason. But I’m not doing anything that different now, I don’t think.”

In fact, while Liam Gallagher doesn’t stray too far from the tried and true, straight ahead rock and roll formula of mixing a dash of the Sex Pistols with a large helping of The Beatles and 60s-era psychedelia that both Oasis and Beady Eye built their careers on, his new album, As You Were, under Gallagher’s own name, as a solo artist for the first time in his more than 25-year career, certainly ups the ante.

“The word ‘solo,’ I just think people are kind of…,” Gallagher trails off in thought, with a sigh. He clearly doesn’t see himself as a solo artist, even though he now finds himself as one. “I’ve been doing it for 20 years, know what I mean? So I guess I’m just trying to find the holes.”

There’s no doubt about it, As You Were, called a return to form and akin to the heady days of Oasis’ glory days by both critics and fans alike, is Liam Gallagher at his best. While it clearly borrows from the finest moments of the Oasis catalog – “I’m entitled, know what I mean?” says Gallagher, defiantly – it’s not just the classic sound that’s so engaging. Gallagher is as present as he’s been in ages on the tracks, which also exhibit a sharper, more modern edge than anything he’s ever had his name attached to.

Produced by hitmakers Greg Kurstin and Dan Grech-Marguerat, whom Gallagher says were suggested by his label, Warner Bros., the pair have hardly toned down what Gallagher’s fans love most about him, whether it’s that Pistols/Beatles hybrid style or his unabashed rock and roll swagger.

And like the best Oasis records, As you Were is urgent and melodic. Picking up stylistically from where 1995s (What’s the Story) Morning Glory –without a doubt Oasis’ high water mark — left off, it’s audacious, but it also has a grace and tenderness that has been lacking from Gallagher’s most recent work.

Given the universal themes of the songs throughout As You Were, Gallagher is rightly reluctant to explain the meanings behind his new tunes, or to call As You Were a manifesto of any sort, even though his name is now on the marquee.

“I guess I try, through everything in life, to put my soul into it,” Gallagher explains. “So I don’t want to tell people what the songs mean, I want them to feel what they mean. Coming out with a record like this, I didn’t sit down and go, ‘I’m going to write a song about beauty,’ or soldiers, or whatever. So I don’t really got anything to say about what the songs mean. I’m just aware of my life, I guess, and I’m conscious of the things going on in the world, but I don’t know what the lyrics are talking about. I just believe in rock and roll and it believes in me, I think.”

Ultimately, he says he comes from the John Lennon school of thought, in that he’s more concerned about how the recording of a song sounds as a whole and how it makes people feel, and, of course, if it makes them move.

“Yeah, I’m with that, man,” Gallagher says when Lennon’s point of view comes up in conversation. “I look at the people out there (in the audience)… Are they moving? Do they dig it? I think they are. At least that’s what I’m getting. So when I tell people, ‘This is what it’s about,’ I think they sort of stop right there, because they go, ‘Oh, that’s what it’s about,’ and they stop searching themselves.

“It takes away from what it was making them feel before I opened my mouth – which you know I’m very good at – and what they thought it was about. Besides, man, what I think a song is about and what they think it’s about will be two different things. It’s better to leave some mystery to it, anyway. As long as it sounds good, I’m okay with it.”

There’s no arguing with Gallagher. His passion and self-confidence are infectious. But As You Were is a solo debut worthy of his larger than life persona, and should go a long way toward silencing critics who have been writing that his brother Noel’s presence would surely be missed, without having heard as single note of the album. Of course there are the occasional wince-inducing lyrics and rhymes, but it almost wouldn’t feel right if it were a Liam Gallagher solo album without those moments. In fact, after repeated listens, they become almost endearing, and part of the greater picture, as Gallagher had alluded to earlier in our conversation.

“Look, man, you’ve got an old player up there, who’s won the championship, and you bring in a new player who’s not won anything, but he’s an up-and-coming guy and all that, and you just gel you know what I mean?” Gallagher explains of his new band, who will be supporting him on his upcoming U.S. tour. “The way I see it, it’s like an old pair of shoes paired with a brand new jacket.”

Featuring Jay Mehler on lead guitar, Drew McConnell on bass and backing vocals, Mike Moore on rhythm guitar, Christian Madden on keyboards and Dan McDougall on drums, Gallagher’s band is made up of virtual unknowns, and were an awkward mix of garage thrash and overcompensating stiffness when they performed a warm-up show in New York City recently. But Gallagher says he’s grown fond of his new “bandmates” – which he refers to them specifically as several times during our conversation – and has found that letting them do their thing has been the best way for them to find their way in his formidable wake.

“I’d only known Jay from Beady Eye,” Gallagher explains. “But the rest of them I’d never met before. But they’re great musicians, and they know what they’re doing, and I kind of just let them get on with it. We did a lot of action before we went on tour – lots of rehearsals – but it’s like, I’m not one of those bossy people, ‘Do it like this, do it like that, you need to do it this way.’ All you’ve got to do is tell them once and they’ve got it. And they’re loving it. They’re loving being in the band. Obviously it’s my name above the door, but they’re not just showing up and getting the money, man, they’re a bunch of very talented musicians.”

Gallagher is also quick to point out that he’s attracting a far younger crowd than his brother Noel. He puts that, too, down to his young, hungry band, as well as his unabashed rock and roll attitude, and the fact that he never pretends to be anything other than exactly the man you think he is, always giving it his all.

“I’m giving them what they want,” Gallagher says of his audience. “I remember years ago reading interviews with Chuck Berry and Little Richard and shit like that, saying, ‘Listen man, if you’re not sweating on that stage and giving it all, they’re gonna fucking boo you.’ So all these geezers weren’t doing it and had to pour water over their heads to make it look like they were sweating. But that ain’t me. I’m sweating up there and I’m giving it as much as I fucking can, know what I mean?”

Still, Liam Gallagher is the first to admit that he loved being in Oasis, and what being in a band gave him as an artist.

“It’s the camaraderie, yeah,” Gallagher says, explaining that while he is focused on promoting his new album and making As You Were all that it can be, he’s open to collaborations on any possible follow-up album.

“Oh, definitely, man,” he says, excitedly. “Definitely. But that’s in the future. At the moment there is no songs for no new album. This is all we’ve got at the moment. But when we get around to doing it, and I guess now that I’m doing co-write with people and I found it kind of not weird at all, maybe on the next one we can have loads of people on there – Johnny Marr and whoever. But as long as they’ve got good songs, that’s what it’s all about. I don’t care who writes them, or who’s playing guitar. So we’ll see, man. We’ll see. Maybe the next album can be a whole different ballgame altogether.”

So is he open to making an experimental album, along the lines of his brother’s recently-teased forthcoming release Who Built the Moon?