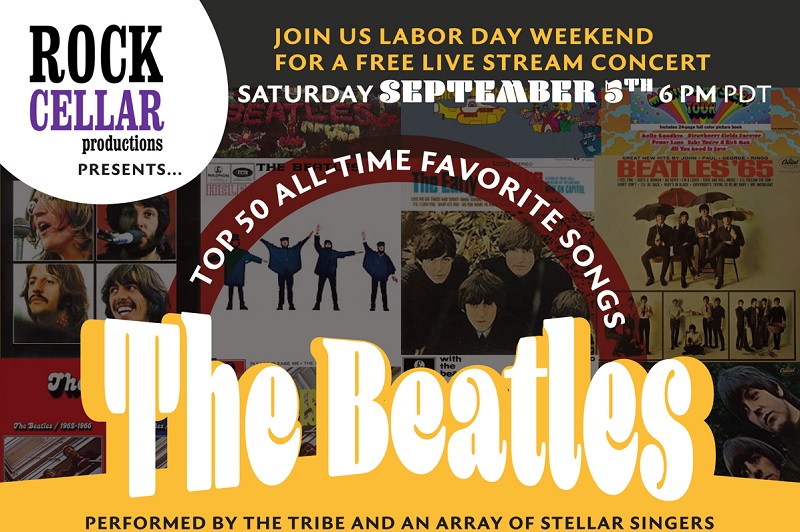 What are you doing this Labor Day Weekend? No matter where you are, or what you’ll be up to the holiday weekend, here’s a great suggestion for some at-home musical entertainment: “Labor Day Weekend Countdown: The Beatles Top 50 All-Time Favorite Songs,” a live stream concert proudly presented by Rock Cellar Productions and The Tribe Band.

Chris Carter, host of America’s longest-running Beatles radio show, Breakfast with the Beatles (on SiriusXM and 95.5 KLOS) will be the show’s emcee, counting down the Top 50 All-Time Beatles Songs, as voted on by fans here at Rock Cellar a few weeks back, and he’ll be introducing the performances by The Tribe Band. The show will be live-streamed from the Coach House in San Juan Capistrano, CA, with adherence to proper health precautions, and will feature such legendary Beatles tracks as “Hey Jude,” “Let It Be,” “Come Together,” “Yesterday,” and many more fan faves.

Watch the stream below!

The Labor Day Weekend Countdown: “The Beatles Top 50 All-Time Favorite Songs” hosted by Chris Carter (Breakfast With The Beatles) WATCH THE ARCHIVE HERE! Celebrate the greatest Rock & Roll band that ever lived than with an end of the summer all-time favorite Beatles countdown. Songs were chosen by the readers of Rock Cellar Magazine! This is a FREE live streamed concert! The Tribe Band’s core band is joined by a rotating roster of stellar singers, many who are featured emerging artists selected by the Valley Cultural Foundation.

The show will stream live via AlertTheGlobe.com and on the Rock Cellar Magazine Facebook page, beginning at 6 p.m. PDT.

Be sure to tune in! For more information and to be reminded of the live video on Sept. 5, click here to visit the Facebook event page.