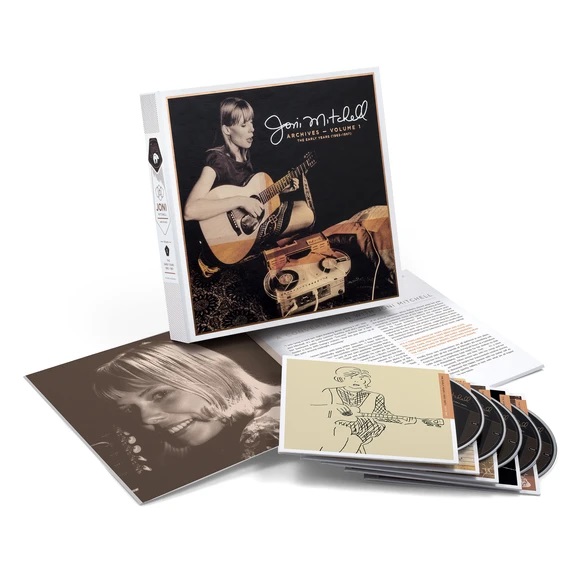 On Oct. 30, the Joni Mitchell Archives will be released to the masses by the iconic singer/songwriter and Rhino Records — and now we have a sample of what’s to come with Vol. 1: The Early Years 1963-67.

Here’s the story behind the recording:

“It was my firstborn. I didn’t know whether it was a good song or a bad song. It was just the first one that came out." -Joni

Listen to "Day After Day" off of the Joni Mitchell Archives Vol 1: The Early Years here: https://t.co/1gEhLDURIp pic.twitter.com/0Lv1wSkLQJ

The track joins a pair of previously shared songs from the collection. Here’s “Urge for Going,” from “Myrtle Anderson Birthday Tape: Detroit, MI (1965)”:

And the earliest known recording of Joni Mitchell, in the form of a rendition of “House of the Rising Sun” from a radio performance in 1963:

Joni Mitchell Archives Vol. 1: The Early Years 1963-67 is a new 5-CD set that will also be made available digitally. The collection will feature nearly six hours of material, all unreleased, of home, live and radio recordings that “flow chronologically to paint a rich portrait of Mitchell’s rapid growth as a performer and songwriter during the period leading up to her debut album.”

It includes 29 original compositions from Mitchell that that have not previously been released with her vocal tracks — so this ought to be a real treat for fans.

Rhino included a statement from Mitchell regarding this early material:

“The early stuff, I shouldn’t be such a snob against it. A lot of these songs, I just lost them. They fell away. They only exist in these recordings. For so long I rebelled against the term, ‘I was never a folk-singer.’ I would get pissed off if they put that label on me. I didn’t think it was a good description of what I was. And then I listened and…it was beautiful. It made me forgive my beginnings. And I had this realization…I was a folk singer!”

Additional details on the Vol. 1 collection, per a news release:

The collection begins in 1963 with her earliest-known recording as a 19-year-old Mitchell performs “House Of The Rising Sun” at CFQC AM, a radio station in her hometown of Saskatoon, Saskatchewan. The box culminates with a stirring, three-set 1967 nightclub performance recorded at the Canterbury House in Ann Arbor, Michigan.

The 5-CD collection includes a 40-page booklet that features many unseen photos from Mitchell’s personal collection as well as new liner notes featuring conversations between writer/filmmaker Cameron Crowe and Mitchell, who recently spent Sunday afternoons together discussing her archives. Crowe will continue to provide liners for future releases in the series.

This is just the beginning of this dive into the Joni Mitchell archives, so stay tuned for more …