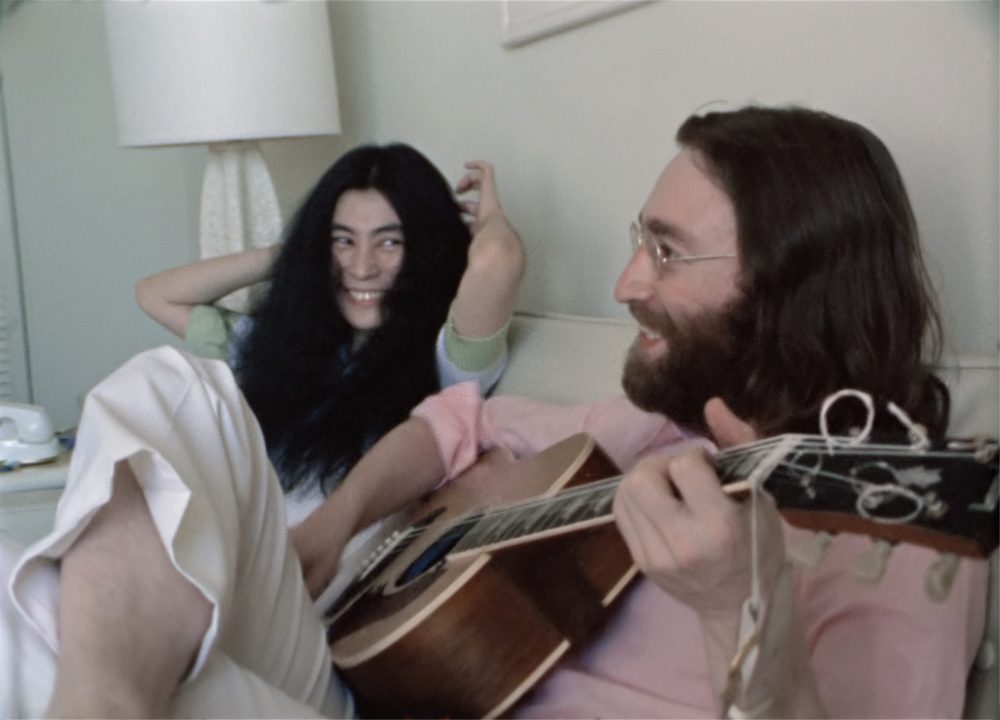 Shortly before recording their anthemic “Give Peace a Chance” at the Queen Elizabeth Hotel during their Bed-In for Peace, John Lennon and Yoko Ono staged a rehearsal of the composition at the  Sheraton Oceanus Hotel in the Bahamas.

Until this week, video of that performance — the earliest-known rendition of the song — was never released, but it has been unearthed on Tuesday as another preview of the upcoming Ultimate Collection edition of John Lennon/Plastic Ono Band.

The performance, captured by Lennon’s film cameraman Nic Knowland and sound recordist Mike Lax, can be experienced below:

John Lennon/Plastic Ono Band — The Ultimate Collection will be out Friday, April 23.

More about John & Yoko’s Bed-In, per a news release:

Originally set for New York, the second Bed-In was relocated to the Bahamas after John and Yoko were denied entrance into the U.S. because of John’s 1968 cannabis conviction. However, due to the layout of the hotel and the sweltering Bahamian heat, the couple flew to Toronto the following day and eventually settled in Montreal, chosen for its close proximity to New York and the American press, which they were hoping to use to get the attention of President Nixon.

The couple set themselves up in a hotel suite for a week, where they allowed unlimited access and gave endless interviews, in order that their extended honeymoon serve as a “commercial for peace.” The event culminated with the recording of John’s first solo single and the first to be credited to the Plastic Ono Band, “Give Peace A Chance.”

This “Give Peace a Chance” demo is the latest preview of the upcoming Ultimate Collection revisiting of Lennon’s first proper album of his post-Beatles career. It joins a recently debuted mix of “Look At Me”:

And here’s  “It’ll Be Me. (Jam),” a previously unreleased jam/cover recording from the album sessions featuring Lennon on vocals and guitar and Ringo Starr on drums, as well as Klaus Voormann on bass and Billy Preston on piano:

A remastered version of “Mother” was also shared ahead as a tribute to Lennon’s mother, Julia:

There will also be a special Twitter Listening Party event geared around the release of the Ultimate Collection. Per a news release:

Fans around the world are invited to listen to the new mixes of John’s landmark solo album, John Lennon/Plastic Ono Band – The Ultimate Collection, together on Saturday, April 24 at 10 am PDT/1 pm EDT/6 pm BST as part of Tim’s Twitter Listening Party, the acclaimed interactive listening experience created and hosted by Tim Burgess (The Charlatans UK).

Visit TimsTwitterListeningParty.com for details about how to join and stay tuned for more info that will be revealed closer to the date at johnlennon.com