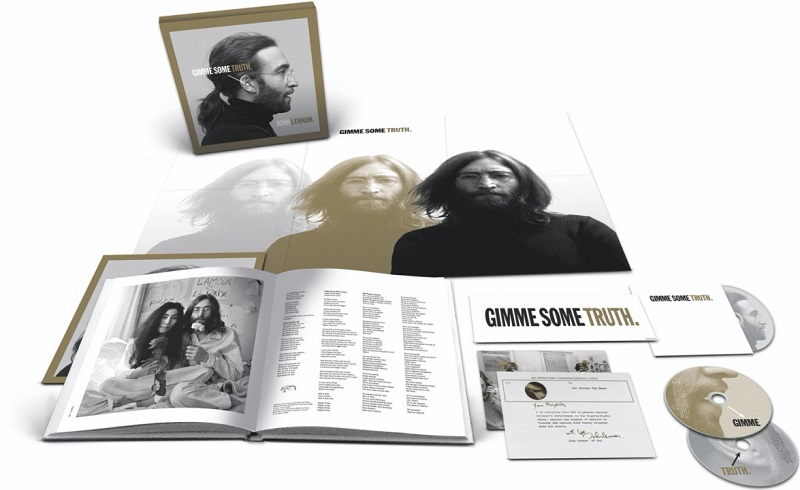 On Oct. 9, the 80th birthday of Beatles legend and cultural icon John Lennon will be celebrated in grand fashion with John Lennon Gimme Some Truth. The Ultimate Mixes., a massive new box set that was announced in late August.

The collection will be available in a variety of formats, and is up for pre-order now at our Rock Cellar Store:

On Friday, a new “Ultimate Mix” of “Mind Games” was shared as a preview of the collection:

The track joins the previously debuted new mix of “Instant Karma (We All Shine On),” which you can also stream below:

The material on this massive collection was personally handpicked by Yoko Ono Lennon (Executive Producer) and Sean Ono Lennon (Producer), and it promises to be a wealth of entertainment for Lennon fans.

“John was a brilliant man with a great sense of humour and understanding,” writes Yoko Ono Lennon in the preface of the book included in the Deluxe Edition (available here). “He believed in being truthful and that the power of the people will change the world. And it will. All of us have the responsibility to visualize a better world for ourselves and our children. The truth is what we create. It’s in our hands.”

Here’s more on the process that went into curating Gimme Some Truth. The Ultimate Mixes., per a news release:

Mixed and engineered by multi GRAMMY® Award-winning engineer Paul Hicks, who also helmed the mixes for 2018’s universally acclaimed Imagine – The Ultimate Collection series, with assistance by engineer Sam Gannon who also worked on that release, the songs were completely remixed from scratch, using brand new transfers of the original multi-tracks, cleaned up to the highest possible sonic quality. After weeks of painstaking preparation, the final mixes and effects were completed using only vintage analog equipment and effects at Henson Recording Studios in Los Angeles, and then mastered in analog at Abbey Road Studios by Alex Wharton in order to ensure the most beautiful and authentic sound quality possible.

As for the material included in the collection:

Sequenced in chronological order by album they were released on, songs on the 36-track version include all of Lennon’s biggest hits and showcase his thoughts, beliefs and convictions about everything from peace (“Imagine,” “Give Peace A Chance,” “Happy Xmas (War Is Over)”), religion (“God”), politics (“Power To The People,” “Working Class Hero”), lying politicians (“Gimme Some Truth”), racism (“Angela”), equality (“Woman”), love and marriage (“Love,” “Oh Yoko!,” “Dear Yoko,” “Mind Games,” “Out The Blue,” “Every Man Has A Woman Who Loves Him,” “Grow Old With Me”), fatherhood (“Beautiful Boy (Darling Boy)”), loneliness (“Isolation”) and much more. Some of the many other highlights include the sonically sumptuous “Jealous Guy” and “#9 Dream,” the acerbic “How Do You Sleep?,” the breezy, carefree “Watching The Wheels,” a rollicking live recording of “Come Together” that he had originally recorded with The Beatles, the rapturous Elton John collaboration “Whatever Gets You Thru The Night,” and the jubilant, bittersweet “I’m Stepping Out.”