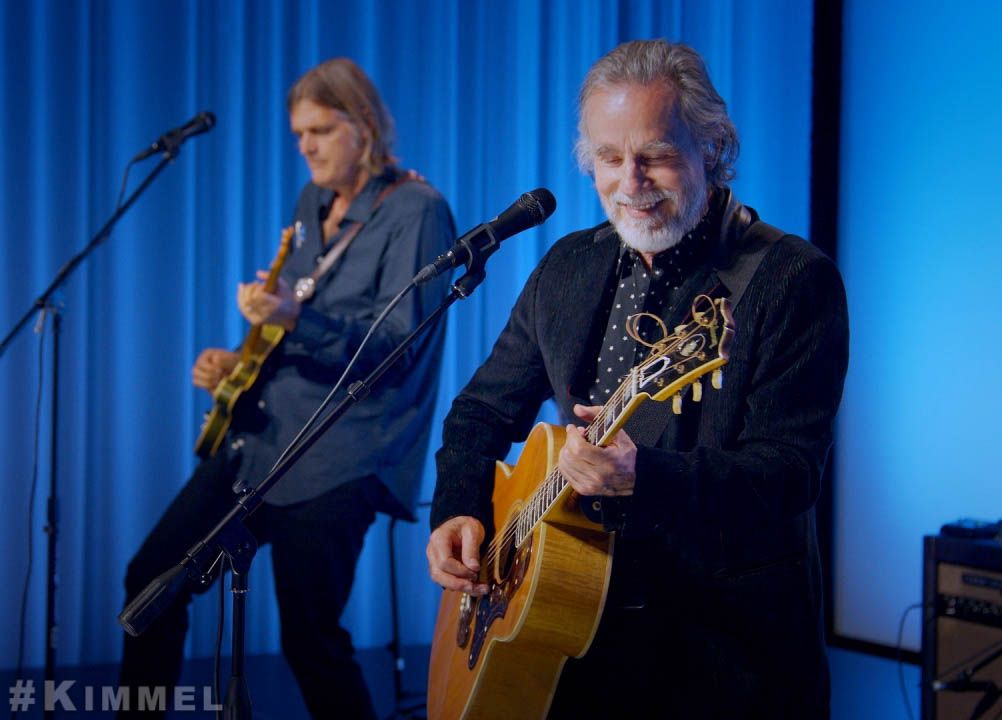 A few weeks back, legendary singer/songwriter Jackson Browne released a new single titled “My Cleveland Heart.” It’s a preview of his forthcoming studio album, Downhill from Everywhere, which will be released on July 23.

On Thursday night, Browne and his band delivered a great performance of the track for Jimmy Kimmel Live!, a lively rendition that accentuated the track’s engaging melody and expert use of slide guitar:

As Browne told Rolling Stone, he was inspired by Bridgers’ own music video for “I Know the End,” one of the most crucial cuts on her excellent 2020 album Punisher. That video was directed by Alissa Torvinen, whom Browne reached out to when conceptualizing a video for “My Cleveland Heart”:

“It was the most fun I’ve ever had making a video,” he says. “I’m a big fan of Phoebe, so I picked Alissa. And then it was really sort of in the last days of planning that someone said, ‘Phoebe could be one of these nurses.’ From there, it was pretty much improvised.”

“What an honor to collaborate with Jackson,” said Torvinen on the making of the video. “His creativity is inspiring, not solely in music, but in everything he puts his energy into. We came up with a script for the video very serendipitously, and Phoebe joining us was a wonderful surprise. The way she received Jackson’s heart and the shot of her watching from the wings . . . perfectly dark and poetic and Phoebe.”

As for the Bridgers cameo, Browne offered up this bit of biting wit:

“I thought it was really appropriate to take out my worn-out, useless heart and hand it to Phoebe,” he said. “Who better to hand [it] to than somebody young, strong, and possibly as cynical as me?”

“My Cleveland Heart” is the latest song shared from the new Jackson Browne album, following “A Little Soon to Say”:

And the title track:

Beginning in late July, Browne will head out on a co-headlining tour with James Taylor. The rescheduled tour, which was supposed to start in 2020 but was pushed back due to the pandemic, will hit the following cities and venues: