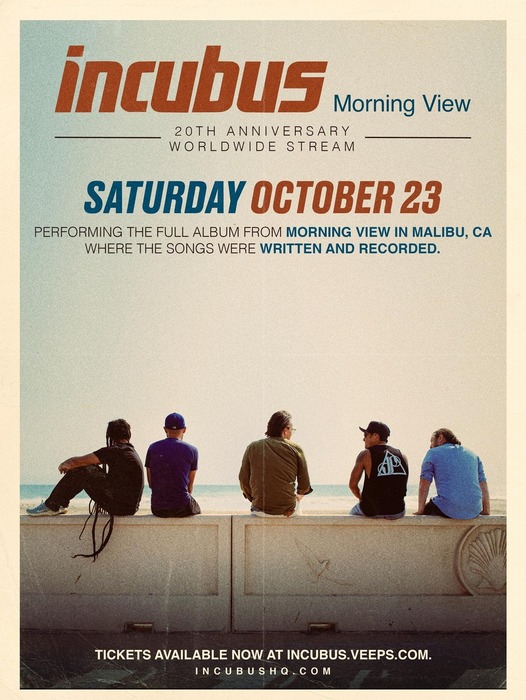 Originally released on Oct. 23, 2001, Morning View marked a step up for Incubus.

At the time, the Los Angeles-based alt/rock band was riding high from its third album, 1999’s Make Yourself, which catapulted the group to stardom and set anticipation high for its follow-up. Morning View more than delivered on expectations, ultimately becoming the top-selling Incubus album and going platinum on the strength of singles such as “Wish You Were Here, “Nice To Know You” and “Warning.”

It was the band’s first release to reach Billboard’s Top 10 list, peaking at No. 2.

This coming Saturday, Incubus will host a very special streaming event from the very same house in Malibu that was the site of the initial album recording sessions, performing the record in its entirety. This will be a special chance for fans to see the band play some songs they don’t play very often on the touring circuit, and looks to be a solid commemoration of a significant 20th anniversary.

We are so excited to share this performance Saturday we are throwing it back all week with Morning View content…Make a plan to smoke something and drink something as we celebrate in the online universe this Saturday. Click through our website to get your tickets. #MorningView pic.twitter.com/D7826PjcRg

Tickets for the live stream start at $19 and are available via Veeps.com. There will be four separate streaming times, but the Veeps site makes it clear that there will be no rewatches available; only the one stated streaming time (which includes 5 p.m. PT in the United States) will be available.